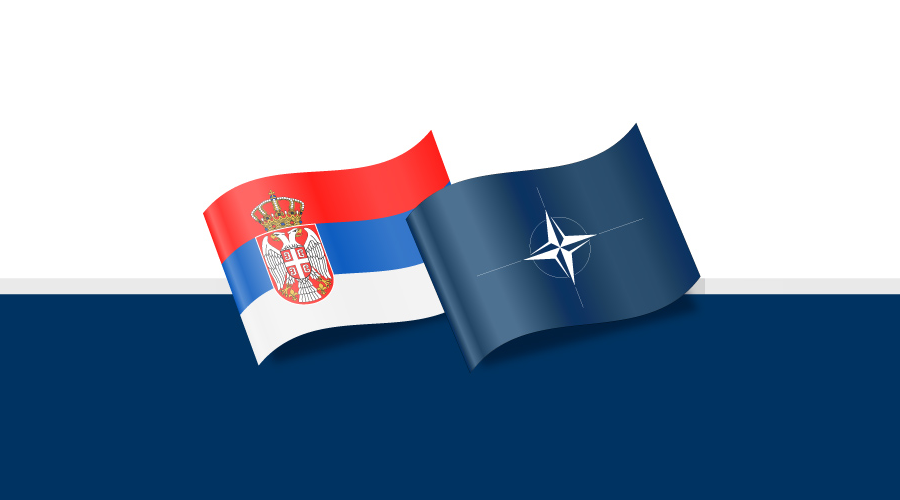 BELGRADE / BRUSSELS – From commemorations, via high-level visits to the adoption of the new Individual Partnership Action Plan (IPAP). This is what Serbia-NATO cooperation looked like in 2019, and it seems that Serbia is becoming a very important and responsible NATO partner, which was also noted by Brigadier General Cesare Marinelli, Chief of NATO Military Liaison Office in Belgrade, in an interview with EWB.

The end of the year is an ideal opportunity to recapitulate Serbia-NATO relations and highlight the most important events of 2019.

At the beginning of June, now traditional military exercise “Platinum Wolf 2019” began at the military base “Jug” (South) near Bujanovac and lasted until 19 June. The exercise brought together about 500 members of the armed forces from 9 countries – Bosnia and Herzegovina, Bulgaria, Hungary, Italy, North Macedonia, Romania, the United States, Slovenia, the United Kingdom and Serbia.

Members of the armed forces of these countries had the opportunity to train the use of non-lethal weapons, procedures, actions, and procedures in engaging in multinational operations in the international environment. On that occasion, the commander of the Fourth Brigade of the Serbian Army, General Slobodan Stopa, said that the exercise was an “opportunity to advance our knowledge, and also to exchange experience with the armies of partner countries”.

This exercise was only one in a series of 17 military exercises Serbia has had with other countries, 13 of which were with NATO and four with Russia.

The twentieth anniversary of the bombing and KFOR Mission in Kosovo

March 2019 marks the 20th anniversary of the NATO bombing of the Federal Republic of Yugoslavia. The operation named “Allied Force” began on March 24, 1999, and lasted a total of 78 days.

Twenty years later, Serbia, Kosovo and NATO members interpret this event in different ways, but everyone agrees that this should never happen again. President of Serbia, Aleksandar Vučić, said that “NATO aggression” had been carried out against Serbia and that “things should be called by their real name”.

“I am sending the message that such things should never happen again, I am saying that we need a good and decent relationship with NATO so that we never put Serbia in such position,” said Vučić.

June marked another 20th anniversary which is the beginning of the KFOR Mission in Kosovo. On the occasion, a commemoration was organized in Pristina Film City and it was stated that the mission would continue to guarantee the safety and freedom of movement to all communities.

On that occasion, Admiral James Foggo, Commander of the Allied Forces in Naples, said that the Allies would continue to cooperate with the Serbian Armed Forces and that the mission would continue to fulfil the obligations of the Security Council Resolution 1244, so therefore cooperation with Serbia is necessary.

Todt. D. Wolters,  Supreme Allied Commander Europe and Commander (SACEUR) and U.S. European Command, visited Belgrade for the first time in July this year since taking office in May. During that visit, he met with the President of Serbia, the Minister of Defense, Aleksandar Vulin, the Chief of the General Staff of the Serbian Armed Forces, General Milan Mojsilović, as well as with the Head of the Military Misson of Serbia to NATO, Brigadier General Predrag Bandić.

“We have talked about many topics and I am pleased to say that Serbia’s work and dedication fosters peace and stability in the Western Balkans,” said Walters during the visit, noting that the Western Balkans is a very important region for Europe in terms of overall European security and that NATO respects Serbia’s military neutrality as well as what the Serbian Army is doing.

In September, another senior NATO official visited Belgrade. This time it was Air Marshal Stuart Peach. Chairman of the NATO Military Committee, the highest military body in the Alliance, met with Serbian Foreign Minister Ivica Dacic.

During his visit, Peach expressed satisfaction with the level of partnership between Serbia and NATO and added that NATO is ready to enhance that cooperation. On the other hand, Dačić said that Serbia continues to pursue a policy of military neutrality, as well as strive to be a responsible and reliable partner in maintaining peace and security in the region as a condition for the progress of the region as a whole.

At the end of September, two new workshops were built and opened at the Kragujevac Technical Overhaul Institute. The workshops were jointly financed by the Government of Serbia and the NATO Trust Fund and the Technical Overhaul Institute of Kragujevac. Installations will provide extraction of explosive charges from the missile shells and for delaboration, upgrading and maintenance of ordnance.

The opening of the facility was attended by Aleksandar Vulin, Serbian Minister of Defense, Daniel Dorrington, High Representative for NATO Support and Procurement Agency and Rasim Ćirković, Director of the Technical Overhaul Institute of Kragujevac.

“The NATO Trust Fund and, as its largest donor, the United States Government have done us a great service in helping us make our country safer and to safely destroy the unexploded ordnance and stockpiled ammunition that has been a ballast in our warehouses, but also to extract from it all that is useful to us”, said Vulin at the occasion.

The Government of Serbia finally adopted its second IPAP in early November for the period 2019-2021. The importance of this document is reflected in the fact that it is a means of structuring and adequately organizing bilateral cooperation with NATO in order to carry out reforms.

The new document is conceptualized in accordance with the principles of the Partnership for Peace program, namely voluntariness, transparency and flexibility, where Serbia, in line with its own goals and interests, together with NATO, has identified priority areas where it can best move forward promotes partnerships with this organization.

“The new Individual Partnership Action Plan (IPAP) is not a step towards NATO membership, but an instrument for Serbia to improve its political relations through dialogue and cooperation, without seeking to promote NATO and becoming a member”, said Branimir Filipović, Acting Assistant Minister in the Ministry of Foreign Affairs of the Republic of Serbia.

The Center for Euro-Atlantic Studies has traditionally hosted Belgrade’s NATO Week for the seventh time between 12 and 14 November at the Palace of Serbia. During the meeting, it was assessed that the cooperation between Serbia and NATO is going upwards, as evidenced by the adoption of the latest IPAP.

The conference was attended by, among others, Tacan Ildem, NATO Assistant Secretary General for Public Diplomacy, Robert Pszczel, Senior Officer for Russia and the Western Balkans at the Public Diplomacy Division, and General Milan Mojsilović, Chief of the General Staff of the Serbian Armed Forces. For them, this was an opportunity to meet on the sidelines and discuss Serbia-NATO relations at a closed-door meeting.

In an interview for EWB, Ildem stated that it is necessary to inform the public how the cooperation is taking place and that myths and stereotypes about it should be eliminated.

The last senior NATO official to visit Belgrade this year is Admiral James Foggo, commander of the NATO Joint Forces in Naples. As part of his regional tour, he came to Belgrade at the invitation of General Milan Mojsilović to discuss cooperation between the Serbian Army and KFOR on joint activities implemented under the Partnership for Peace program.

In addition, he had separate meetings with State Secretary at the Ministry of Defense, Aleksandar Živković, and Acting Assistant Foreign Minister for Security Policy, Ambassador Branimir Filipović.

In an interview for our portal, Foggo said, among other things, that he also assessed that cooperation between Serbia and NATO is on the rise, but also that it depends on Serbia how much developed and deep cooperation it wants.