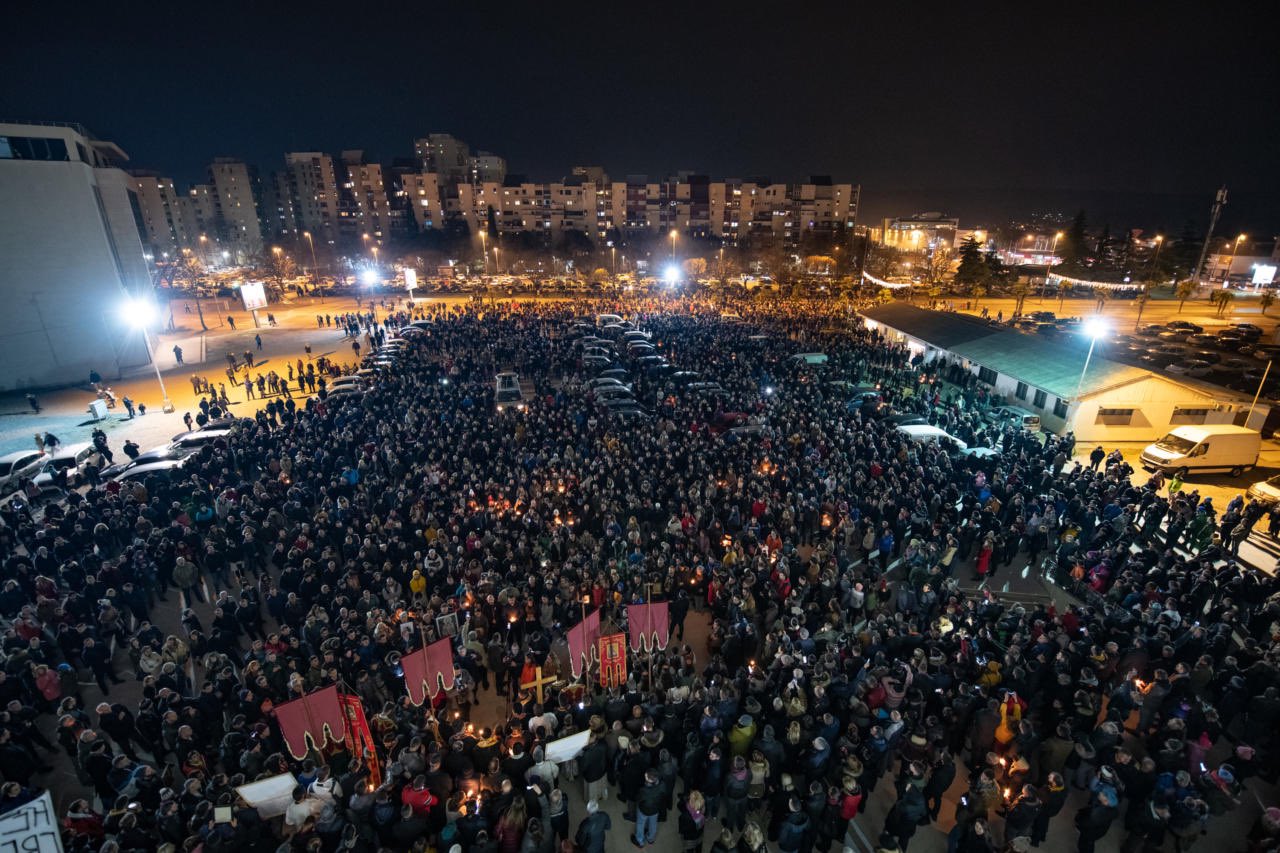 Tensions surrounding the new Montenegrin law on Religious Freedom have been high for more than two weeks since the law was passed in the Montenegrin parliament at the end of December, directly affecting the property of the Serbian Orthodox Church. The issue also led to tensions between Montenegro and Serbia.

Although the countries separated in 2006, many of Montenegro’s citizens declare themselves as followers of Serbian Orthodox Church. Authorities in Podgorica and some members of the opposition supported the law, while the remaining opposition, including the pro-Serb Democratic Front (DF), strongly opposed it.

The day the law was being voted on, an incident occured in the Montenegro’s Parliament and 24 people including 18 MP’s from the Democratic Front were detained. Since then, there have been daily protests by citizens in Montenegro, largely by those who declare themselves Serbs, expressing dissatisfaction with the law.

Despite disagreements, the law came into force January 8. According to the disputed Article 62, religious communities in Montenegro need to prove property ownership before 1918, otherwise the property will belong to the state of Montenegro. That means that Serbian Orthodox Church must prove ownership of the property including medieval monasteries and churches, meaning everything built before December 1, 1918, when Montenegro became a part of Kingdom of Serbs, Croats and Slovenes (Yugoslavia).

Divided opinions on the constitutionality of the law

Belgrade attorneys Milenko and Momir Radić filed an initiative last week to evaluate the constitutionality of the law with the Montenegrin Constitution and international treaties. Montenegrin analyst Boris Marić points out that there is a whole set of contentious issues in the law.

“First, the legal text itself contains a number of legal illogicalities, vagueness and conflicts of law. This is especially true when it comes to the issue of registration of religious communities, where no clear answer has been given and any discretionary decision has been removed as to who is obliged to register and who does not have that obligation”, said Marić.

Marić pointed out that the part which is placed in the transitional and final provisions, which currently concerns the Montenegrin, regional and international public at the most, and relates to the obligation to prove entry in the country’s property register, is in conflict with the legal system of the country, and therefore with the Constitution.

“Namely, the legal system of Montenegro is not insufficient in this part and it was not necessary to address it with the norms of the Law on Religious Freedom, and to produce the effect of re-regulation. In a situation where this law would be considered in practice as a lex specialis, it would, as written, produce a retroactive effect. In order for a legal text to have norms prescribing retroactivity, it must be enacted in a special procedure that would justify the public interest in introducing such norms into the country’s legal system”, stated Marić and added that if anyone wants to correct “historical injustice” there has to be a consensus in the society which can only be achieved through dialogue in democratic conditions.

Assistant professor at the Faculty of Political Sciences in Belgrade Milan Krstić has a similar opinion stating that the initiative to review the constitutionality of the law is good and he hopes that the Constitutional Court of Montenegro will be able to make a decision impartially and without pressure from the executive branch.

“I believe that this law violates some of the fundamental principles of constitutionality of Montenegro without a dilemma. First of all, it is a property right, which is also guaranteed by international agreements signed and ratified by Montenegro, such as the European Convention on Human Rights and the Stabilization and Association Agreement. A simple transfer of church property built before 1918 into state ownership, made possible by this law, effectively nationalizes property that is not state property outside ordinary court proceedings, contrary to the opinion of the Venice Commission”, said Krstić.

Krstić highlighted that the burden of subsequently proving ownership is shifted to religious communities. More specifically, this applies only to the Serbian Orthodox Church, since other religious communities are protected by special treaties signed with Montenegro. Krstić explained that by comparison, it is as if you considered someone a priori guilty in the criminal process and then shift the burden of proving the innocence to the person.

“However, what is important to note is that the essential intent of this law and its proponents virtually negates another fundamental principle of the constitutionality of Montenegro, as well as all contemporary states – namely the separation of religious communities from the state. In this context, I find it unacceptable that top state officials publicly state as their goal the status of autocephalousness of the Montenegrin Orthodox Church, which is a par excellence ecclesiastical issue into which a secular state should absolutely not interfere”, Krstić concluded.

Amid tensions in Montenegro, Serbian President Aleksandar Vučić cancelled his visit to Montenegro which was planned for Christmas Eve on 6 January. The decision was made after Vučić met with Patriarch of Serbian Orthodox Church Irinej for fear that “the Montenegrin authorities would use his visit to say it was an attack on independence and a constitutional order of Montenegro”.

Nonetheless, speculations that the incident with the law was deliberately made ahead of the elections in both Montenegro and Serbia could be found in the media. Executive Director of the Politikon Network, a think tank based in Podgorica Jovana Marović thinks that this scenario could easily be true.

“The ruling Democratic Party of Socialists of Montenegro is running out of materials for rhetorical acrobatics and explaining that reform processes are successful, that the state is making progress in the EU integration process, and that the economic situation is getting better and better. For these reasons, this party often resorted to the tried and tested recipe for further division of society. Therefore, it would not be strange to do so now, maintaining the differences from the time of the referendum [held in Montenegro on whether the country should separate from Serbia] or even from 1918, instead of reducing differences by working on the concept of a civic and multiethnic state, which is advocated, but only on paper”, says Marović for EWB.

She added that this law can also be interpreted as part of a strategy to strengthen the pillars of the Montenegrin nation, which the President announced in his inaugural speech. Regardless of whether such motives exist, Marović concluded that the sharpened rhetoric suits the political elites in both countries in an election year.

Milan Krstić believes that the political scientist Vladimir Pavićević, the President of the Montenegrin Party, is right in pointing out that the adoption of this law was done, among other things, with the intention of further fostering identity divisions in Montenegro in order to draw public attention from issues of democracy and free elections in Montenegro right before holding regular elections.

“Such a mechanism is not unusual for both the Podgorica and the Belgrade authorities, which have repeatedly used the raised tensions over pressing issues (especially in the context of Kosovo) to draw attention from a particular affair or democratic deficit. An extremely large number of Montenegrin citizens of all nationalities, who through peaceful walks try to defend the civil rights and constitutional values ​​of Montenegro, are an excellent indicator of citizens’ attitude to this law”, said Krstić.

Citizens’ attitude is also reflected in two appeals that have attracted attention across the region. The first was issued at the end of December under the name Appeal against Belgrade’s Threats to Peace in Montenegro and the Region, and was signed by 88 public figures from across the former Yugoslavia. Signatories accused Serbia of threatening peace and attempting to destabilize Montenegro.

In a response to this, the Appeal of the Academic Community and Civic Activists on the Adoption of the Law was published in Serbia, stating that the law is not adjusted “with the basic principles of the functioning of a modern democratic state”. Signatories of the appeal are led by Vladimir Kostić, President of the Serbian Academy of Sciences and Arts.

Milan Krstić looks at this appeal as an attempt by a number of members of the academic community and civic activists to inform the public about the events.

“Not only about the events, but also about many other shortcomings and problems of this law, including ignoring the right to acquire property by maintenance, as well as the whole way of adopting this law with numerous democratic defects”, said Krstić.

However, Appeal initially signed by 88 public figures now has more than 800 signatories.
“The Republic of Montenegro is a target of attempted destabilization by violent means: its peace, territorial integrity, constitutional order, the rule of law, citizens’ equality, and equal status of all churches and religious communities are under threat”, the public appeal argues.

On the other hand, the Venice Commission made its commentary on the law long before the current events. In 2015, Montenegro submitted to the Venice Commission of the Council of Europe their proposal of a Law on Religious Freedom which would change the old Law on the Legal Status of Religious Communities from 1977, but the draft was shortly withdrawn due to numerous criticisms of the Commission. The revised draft was re-submitted in May last year, this time with positive evaluations from experts, but with the recommendation that religious communities be consulted with a view to reaching a joint decision before adopting the law.

The Venice Commission recognized precisely the Article 62 as one of the most controversial points. It stated that the state has the right to impose certain conditions on the use of property, but that it has to provide additional safeguards in court proceedings to prove the right to property of religious communities. Experts responded positively to statements by Montenegrin officials that the transfer of religious sites and land would not affect their use, but noted that it did not stem from the Draft Law.

Experts EWB spoke to agree that this event could have consequences for both Montenegro and Serbia when it comes to the European integration.

“I sincerely hope that this crisis in Montenegro will be resolved institutionally – either by a decision of the Constitutional Court or by an amendment of this law by the Parliament. Otherwise, I believe that such a law could have consequences for the further European path of Montenegro”, Milan Krstić pointed out and added that that would not be in the interest of the stability of this region.

Boris Marić expressed the same concerns saying that this event could have consequences for both countries in terms of the EU’s insistence on pursuing a stable regional policy, which means interstate and regional cooperation that would demonstrate the capacity of our societies to be a part of the European space.

Jovana Marović concluded that regardless of certain inappropriate statements and activities, she wants to believe that our societies are mature enough not to be instrumentalized for the sake of anyone’s interests and strategy games.