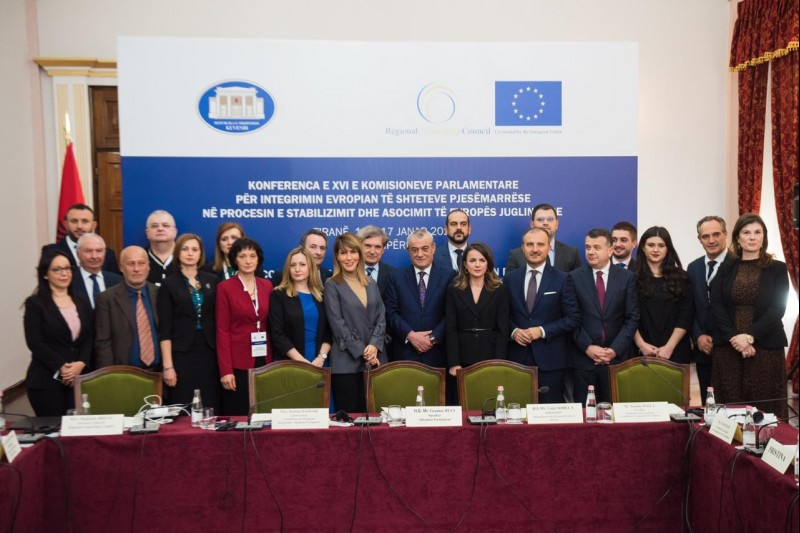 Conference of the Parliamentary Committees for EU affairs of the countries participating in the Stabilisation and Association Process of South East Europe (COSAP); Photo: RCC/Armand Habazaj

TIRANA – In times when politics is in critical condition, Parliamentary dialogue between the Western Balkans and EU on the future of the region is much needed, said Regional Cooperation Council (RCC) Secretary General Majlinda Bregu at the Conference of the Parliamentary Committees for EU affairs of the countries participating in the Stabilisation and Association Process of South East Europe (COSAP) held in Tirana today, it is stated in a press release.

Bregu stressed that RCC readily contributes to this new dynamics by supporting a parliamentary dialogue and cooperation, which remain a steady beacon in the ongoing struggle for democracy.

„Tackling political, economic, social, environmental, cultural and security issues in our region is not the responsibility of Governments only,“ she said, adding that parliamentary support for the reforms undertaken is vital to ensure that the needs and voice of the citizens are heard.

According to Albanian Daily News, Chairman of Socialist Party’s (SP) parliamentary group Taulant Balla asked Europe to keep the promise given to the Western Balkans.

„Last year marked an important but not at all pleasing decision for our region. Failure to make the decision to open negotiations has caused a critical reaction. EU should keep the promise given to the Western Balkans region. This dates back to 2003 at the Thessaloniki Summit and still remains an open process today”, Balla said commenting on the decision of European Council not to open the accession negotiations with Albania and North Macedonia.

He added that one of the most epic failures of the EU is the fact that the citizens of the Republic of Kosovo are still not involved in the process of free movement in the Schengen area.

Merkel: We have to treat Albania and North Macedonia together if we want to be fair

Crucial for EU enlargement is integration of the Western Balkans