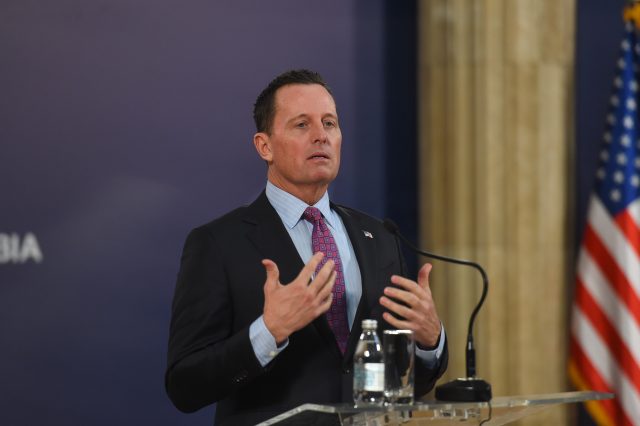 BELGRADE – “Kosovo must abolish 100 percent taxes on goods from Serbia and Bosnia and Herzegovina and Serbia must stop the campaign for withdrawal of recognition of Kosovo”, stressed the US Special Envoy for Belgrade-Pristina Negotiations Richard Grenell after today’s meeting with the President of Serbia Aleksandar Vučić, reports Tanjug. After visiting Pristina, Grenell is in an official visit to Belgrade today.

Grenell pointed out that the abolition of taxes and the cessation of the Kosovo recognition campaign must take place simultaneously. “I believe that will happen soon”, said Grenell, noting that the business community and citizens want this to happen.

Serbian President Aleksandar Vučić replied that he does not accept “equalizing the withdrawal campaign with the illegal introduction of taxes on Serbian goods”. “We have a national stance on Kosovo’s independence, which is different from that of the United States and Pristina. They want as much recognition as possible, we don’t want it and our job is to work on it”, said Vučić.

This is the second visit of the US Special Envoy to Serbia since his appointment in October. The meeting was also attended by US Ambassador to Serbia Anthony Godfrey.