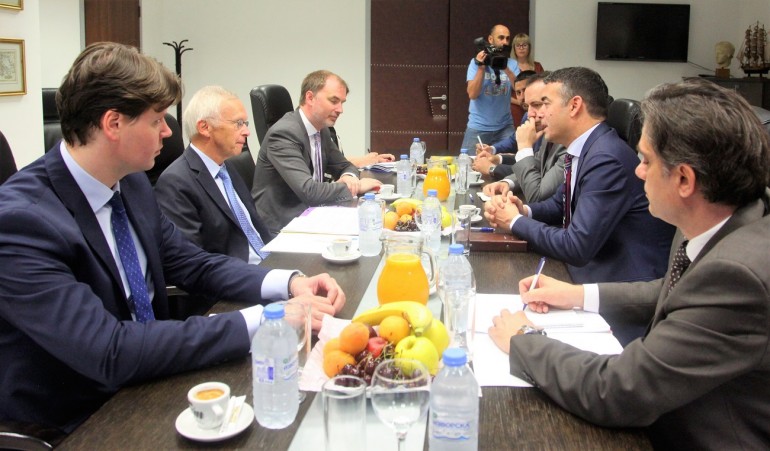 Reinhard Priebe at the meeting with Dimitrov and Osmani; Photo: Macedonian MFA

BELGRADE – “Priebe Report”, requested by the Free Citizens Movement (PSG) of Serbia from the European Union last week, can be implemented in this country, even though it has already opened accession negotiations. This report is a useful tool for assessing key issues of the rule of law, experts say.

The controversy over the issue arose when the media reported last week that the “Pribe Report” for Serbia will not be drafted, as it is never written for countries that are already in the process of accession negotiations.

At the request of our portal, the European Commission did not produce any official document that would prevent the implementation of reports by independent experts detailing the problems of the rule of law, which had already been implemented in North Macedonia and Bosnia and Herzegovina.

“The so-called ‘Priebe’ reports, published on North Macedonia and Bosnia and Herzegovina, have been commissioned in very specific contexts to address specific rule of law challenges. They have helped to complete the picture of the rule of law in these countries, and they are a complement to comprehensive annual progress reports for measuring progress throughout the region”, Ana Pisonero, European Commission Spokesperson for Neighborhood, Enlargement and International Partnerships, told EWB.

Florian Bieber, professor of South East European History and Politics at the University of Graz, is clear on this point.

“Priebe report can be written for any Western Balkan country, and there is no reason why this should not apply to Serbia. The report is not a part of a particular stage in the negotiations, so it can be compiled both before and after the opening of accession negotiations”, says Bieber, coordinator of the Balkans in Europe Policy Advisory Group (BiEPAG).

He added that the European Commission explicitly wrote in its 2018 Enlargement Strategy that more detailed assessments of the rule of law and advisory missions for the entire Western Balkans were needed, building on the experience of earlier advisory missions. In doing so, (EC) clarified that such missions could be carried out anywhere, including Serbia and Montenegro.

Jelena Pejić Nikić, Researcher at the Belgrade Center for Security Policy, points out that there are no formal obstacles to a Priebe Report on Serbia.

“This is first and foremost a matter of the will of the relevant institutions in the EU and the assessment of the situation in Serbia. Of course, the authorities in Serbia are afraid of such a report because its drafting itself is an indicator that special mechanisms are needed to fight the state capture”, Pejić Nikić told EWB.

Independent experts can criticize more openly than the European Commission

The first report of its kind was produced by a team of experienced German lawyer Reinhard Priebe during the political crisis in North Macedonia in 2015, and Jelena Pejić Nikić notes numerous similarities with the current situation in Serbia.

“Similar to the situation in North Macedonia at the time, in Serbia we have a boycott of the parliament and the upcoming elections by the majority of the opposition, protests, mediation of MEPs in dialogue between political parties, a series of unresolved affairs involving high-level political officials directly or indirectly. All of this gives a sense of the momentum of state capture”, she says.

In her view, it would be expected that countries that are actively negotiating membership would not find themselves in this situation, and that the EU would have more effective instruments to monitor, measure and encourage reforms in these countries.

“Unfortunately, this turned out not to be the case”, says Pejić Nikić.

She explains that, while Serbia’s political setbacks are noticeable, as well as the lack of substantive reforms in the chapters, the EU remains stuck in its reporting mold, constrained by both constructive ambiguity and balancing the interests of individual Member States.

“Priebe Report differs in that it is written by independent experts who can use bolder language and who go down to the root of the problem, beyond the technical division into negotiation chapters,” concludes Pejić Nikić.

Florian Bieber agrees that a report of this kind for Serbia would be helpful in identifying true problems.

“Given the stagnation of the negotiations and the apparent problems of the rule of law in Serbia, the report looks like a good tool. It is a good mechanism because it allows for an independent, professional assessment of key issues in the area of ​​the rule of law. That would be useful for Serbia”, Bieber said.

However, he warns that the impact of this mechanism should not be overestimated, and that its success depends primarily on the next steps taken by the institutions, notably the European Commission.

“Also, the report would be an evaluation and recommendation by a panel of experts, which will leave some dissatisfied. Not everyone was happy with the report on Bosnia and Herzegovina, especially many NGOs, who felt it was too lenient. Finally, clarity is important about scope, because the rule of law can be understood too narrowly, as issues related to the judiciary, or more broadly, as issues concerning independent institutions”, concludes Bieber.

Jelena Pejić Nikić also stresses that the Priebe report should be the basis for mechanisms to remedy the problems identified, such as the special prosecution in North Macedonia.

“When the Commission recognized in 2018 that there were elements of a captured state everywhere in the region, it already had in mind new instruments such as advisory missions and case-based peer review missions. These (in the case of Serbia) could be missions similar to Priebe’s in North Macedonia and in Bosnia and Herzegovina”, she says.

Rule of law: The most important area of ​​accession negotiations

The extent to which the areas Priebe Report on Serbia could address are important for its EU membership can be seen from the fact that Chapters 23 (Justice and Fundamental Rights) and 24 (Justice, Freedom and Security) are opened first and closed last during accession negotiations, EC Spokesperson Ana Pisonero reminds.

“The rule of law is a broad term, which implies that public powers are always exercised within the limits prescribed by law, in accordance with the values ​​of democracy and fundamental rights and under the control of independent and impartial courts,” Pisonero reminds for our portal.

She points out that in 2019, Serbia has made progress in legislative and institutional reform in some areas, while in others it faced serious delays.

“Serbia must accelerate reforms in the areas of judicial independence, freedom of expression, prevention of corruption and the fight against organized crime. It must focus its work and energy on making progress in the rule of law by meeting provisional benchmarks”, says Pisonero.

Whether the European Commission will consider a separate report on the state of the rule of law on Serbia is still unknown, but the situation may become clearer after the parliamentary elections, which will likely be boycotted by most of the opposition.