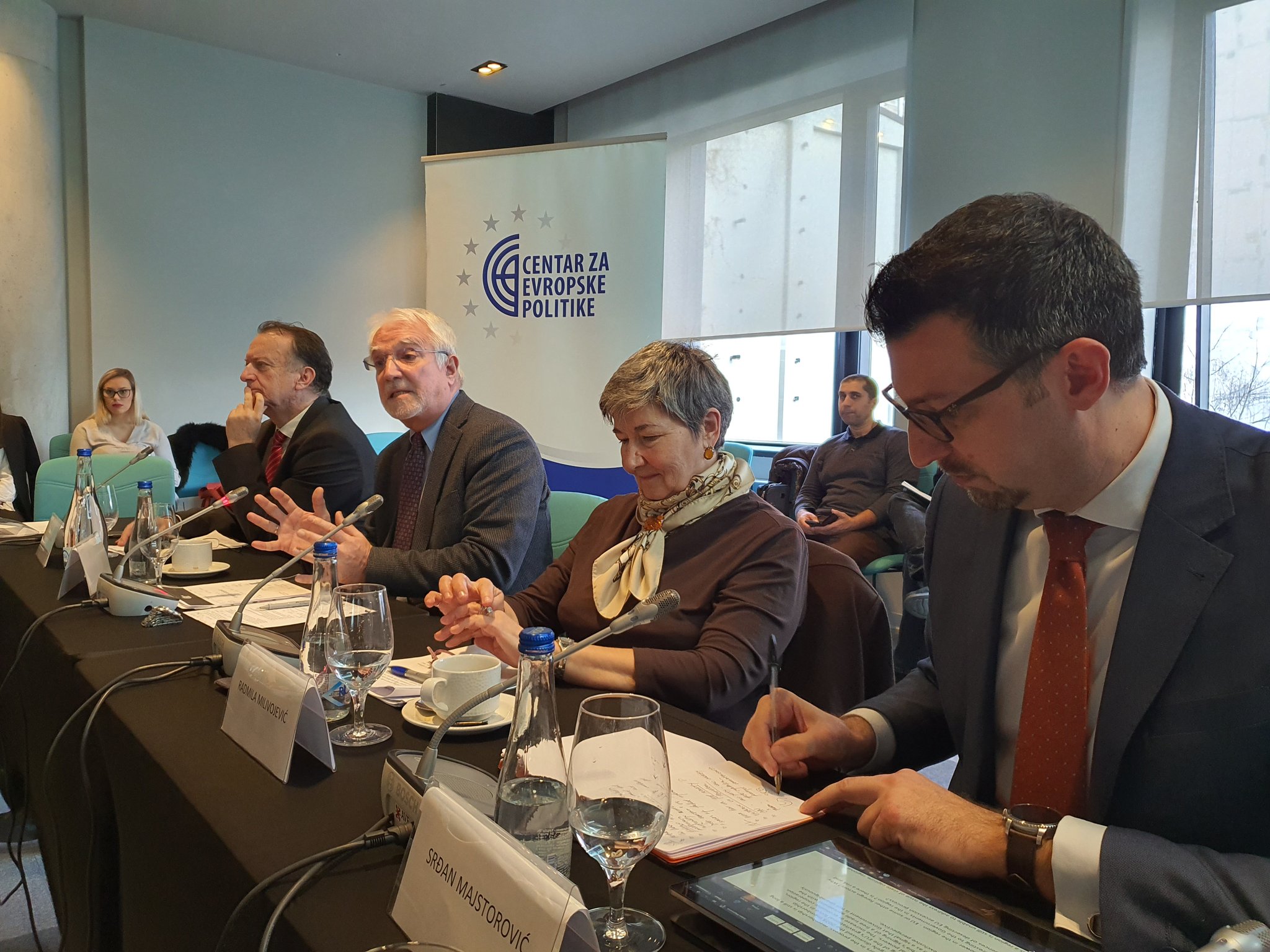 Panel discussion - Serbia and the Western Balkans between East and West – what role for Think Tanks?; Photo: Twiter/CEP Belgrade

The year 2019 was the year of uncertainty for the Western Balkans EU integration process. Influence of the actors outside EU still exists in the Western Balkans and are appealing to some of the actors inside the region. That is why the question arises whether Serbia and Western Balkans are closer to West or East, how does the lack of consensus within EU on accession influences the appetite for changes and reforms and does the region have the luxury to wait and see what is going to happen with EU? Can we explore alternatives when it comes to the full-fledged EU membership?

This was the subject of the panel discussion “Serbia and the Western Balkans between East and West – what role for Think Tanks?” organized by European Policy Centre (CEP). The panelists were Radmila Milivojević, former Secretary of the Office for EU Integration of Republic of Serbia, Duško Lopandić, Ambassador and former Chief of Permanent Mission of Republic of Serbia to EU and Miroljub Labus, independent expert, former Deputy Prime Minister of the Federal Republic of Yugoslavia.

The discussion was moderated by Srdjan Majstorović, President of the CEP Steering Committee.

When it comes to Serbian position between East and West, Milivojević said that Serbia is neither on the East or the West, at least when it comes to its foreign policy.

“We are European country in the process of EU accession and the politicians are trying to balance between these two sides”, she explained.

She also said that for the ordinary citizens it is hard to tell the benefits of the EU accession process.

“We are in the EU accession process for 20 years now and if you ask average citizen how this process influences his/her life, the answer will be long silence”, she said.

She has also pointed out at the existence of economic and social inequalities and pointed out that this problem works against every political agenda.

“Inequality is a big problem, we need to stick to values, rules and standards that are incorporated in EU accession process to tackle it”, she pointed out and added that the questions of the prolonged date to the accession to the EU is just used by politicians to hide that the work is not done and to put blame on somebody else.

Democracy, unfortunately, is not precondition for economic development

Labus said that when it comes to inequalities, people prefer existence over justice and existence is being threaten today.

“When liberal capitalism was developed, liberal democracy was also developed. We used to think that democracy is necessary for growth, but we were wrong”, he said.

He pointed out at the “state captured capitalism” which is most visible in China demonstrated that growth could be achieved without democracy.

“China has three pillars of development, the first one is one party system, the second one is state capitalism, and the third one is reliance on foreign investments”, he explained and added that the justification of such system is not in the protection of democracy and human rights but in the providing people with jobs.

Serbia is mimicking Chinese developing model – one party system, state capture capitalism and reliance on foreign investments”, he pointed out. He also added that people who are voting for the ruling party today, do not care about justice and equality, but about the jobs, he said.

From the other side, Majstorović pointed out that electorate could be educated only when there is a freedom of media and free access to information and where state works as a company, not jeopardizing the competition.

“I do not agree that personal dignity comes at such a high price as becoming a client of the state”, Majstorović said.

Serbian institutions are getting weaker

Answering on the question why Serbia is progressing so slow, regardless of the number of open and closed chapters in EU accession process, Lopandić said that reforms in Serbia are stalling because of the institutions.

“Since 2016, institutions are getting weaker every year and democracy is about institutions”, he explained.

Speaking on position of Serbia and Western Balkans in geopolitical terms, he said that regional cooperation is not working properly, despite Regional Cooperation Council’s efforts.

“Nation-states on the Western Balkans are fundamentally unstable without external interference”, Lopandić said.

He said that on European level, EU going to the second stage of Brexit which will consume a lot of its energy. But in a way, Brexit is another side of enlargement.

“I am not afraid for deserting EU accession process because it would be suicidal for political elites, then it would divide already divided society to a much larger extent”, she pointed out.

Implementation of the NPAA has been a great failure

Speaking about the signing of the Free Trade Agreement between Eurasian Economic Union and Serbia, Labus said that this agreement does not have real economic impact, and it is just a political sign.

“Today we don’t know whether Serbia will become EU member state, but we are now fully economically integrated in the EU market”, Labus said and added that from economic point of view there is no driving force to move forward, especially these days is quite the opposite.

“With US tariffs and trade war, we are protected because we are not members of WTO. We have separate trade agreements which covers 80% of our exports and import and if we sign free trade agreement with China that will be the end of our WTO accession which is precondition for EU”, he explained.

Labus sees the EU accession process of Serbia as “delay and see” policy.

“When reading European Commission Progress Reports, Serbia is not progressing. We are delaying seeing what is going to happen with EU”, Labus said. He also added that EU is interested in the region because of the so-called “second cold war”.

I would agree that the agreement with EAEU is a part of the policy that is more tactical than strategic policy, said Lompadić and added that when it comes to EU accession, we need two dynamics – internal dynamics in Serbia and region and dynamics in EU.

„EU might reform between 2022-2024 but I am not sure about our internal dynamics“, said Lompadić.

„Government adopted NPAA in 2013, which stipulated that by the end of 2019 we should harmonize legislation with EU, regardless of the dynamics in EU“, he explained. He added that we have adopted less than 50% of legislation which means that we terribly failed.

[EWB Interview] Von Cramon-Taubadel: We need dialogue, but we cannot let Vučić and Thaçi get away with everything else