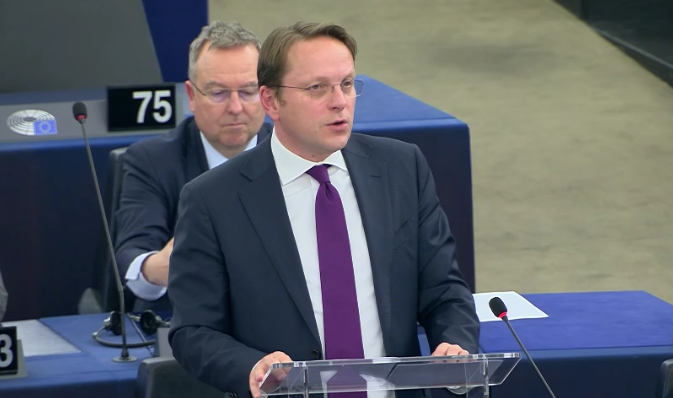 STRASBOURG – European Commissioner for Neighbourhood and Enlargement  Olivér Várhelyi presented the Commission’s proposal for a new enlargement methodology to the Members of the European Parliament during a plenary session on Monday.

“Europe needs to have a strong united voice in the world and it needs to play its geopolitical role to the fore, especially when it comes to its neighbourhood. This is especially valid where we must engage strongly in pursuit of peace, stability and prosperity. This is in our own interest. It is also a question of credibility”, Várhelyi said.

He emphasised that the Commission is working on three tracks – revised enlargement methodology, opening of accession negotiations with North Macedonia and Albania before Zagreb Summit in May and economic-based policy approach as the cornerstone of a forward-looking agenda for the region.

Read about the new methodology here: European Commission presents its proposal for a new enlargement methodology

“Our objective is to intensify our presence in the Western Balkans, to increase investment and to help to close the economic development gap between us. We have to look at what concrete measures we can take to bring forward investments in the Western Balkans, to enhance access to the EU single market, create jobs and entrepreneur opportunities, improve the business and the investment climate and stop the brain drain from the region”, underlined the Commissioner.

“It was high time: the enlargement debate finally got out of the bureaucratic routine in which it had locked itself. Expanding our Union is a political choice. It must be assumed as such, both by the candidate countries and by the European Union”, Loiseau said.

She especially welcomed the emphasis that is placed on the rule of law along the way to joining our Union and the possibilities to reward progress, but also sanction backsliding.

“Finally, I would like to warn us: if it wants to grow, the European Union must be able to reform itself. We cannot welcome new members into a messy house; it’s been said for a long time, it’s time to take action. The conference on the future of Europe gives us the opportunity, let’s seize it”, Loiseau said.

Rapporteur for Kosovo Viola von Cramon-Taubadel welcomed the new methodology on behalf of Greens/EFA group, stating that the it is particularly appreciated that the cluster on fundamentals has a high importance within it.

“Unfortunately, democratic institutions are not safe once we see progress. Rule of law and media pluralism have been declining since Serbia started negotiations in 2014, yet we pretend as if nothing has happened and continue the negotiations and other chapters, but without the fundamentals we cannot progress in other fields either. With a new approach, we can move forward when we see progress. The more ambitious countries need to be included in as many EU policies as possible. With this, we could gain back credibility and work on real changes in every citizen’s life in the region”, said von Cramon-Taubadel.

Speaking on behalf of the European People’s Party, MEP Kinga Gál praised Commissioner Várhelyi for coming up with what she assessed as a well-founded solution in a very short time, just in time to resolve the deadlock at the EU summit in March.

“It can serve as a bridge between Member States that are in favor of starting accession negotiations and those who are skeptical of enlargement”, she said.

According to EP Rapporteur for Montenegro Tonino Picula, who spoke on behalf of the Socialists and Democrats Group, the presentation of the methodology just three months after the veto for Skopje and Tirana showed that the  European Union institutions can still respond at times of crisis. He positively assessed the possibility for candidate countries  to use European Union programmes before accession, as well as the opt-in option for Montenegro and Serbia.

“That’s why I hope this document will convince more sceptical Members to open negotiations with North Macedonia and Albania, hopefully at the March Council meeting”, Picula said.

EP Rapporteur for North Macedonia Ilhan Kyuchyuk stated the new methodology should provide dynamism rather than complicating the enlargement process, which means a stronger focus on fundamental reforms, the organisation of the chapters in thematic clusters and clear conditionality.

“I am very much in favour of this new process, but I do not want to see this new idea turn into a new condition that will again leave the region in the backyard of the EU for a long time”, Kyuchyuk said.

He reminded that the Renew Europe policy paper on the Western Balkans, which is based on the group’s values, and added that the reforms related to the EU should go hand in hand with the enlargement process.

As a Rapporteur for Serbia and chair for Montenegro, Vladimir Bilčik welcomed the revisited methodology.

“Our partners in the Western Balkans must regain trust in their European perspective, and engaged communication is the key to this trust. I am therefore very happy that already last week, on a joint visit, we demonstrated this trust in Belgrade, when representatives of this Parliament and you yourself, Commissioner, visited our Serbian partners”, said Bilčik.

EP Rapporteur for Albania Isabel Santos said that the strengthening of the preponderance of institutional reform, respect for the rule of law and fundamental freedoms within the set of accession dossiers meets the concerns always expressed by the Group of Socialists and Democrats, which therefore welcomes the importance given to this theme within the set of this proposal.

“But I cannot fail to note the timidity with which the Commissioner referred to this topic at this meeting, in contrast to what has happened at other meetings”, she said.

Speaking on behalf of the Identity and Democracy group, Anna Bonfrisco, assessed the proposal as “insufficient”.

“The Commission insists on proposing a method but fails to address the merits of the issues. The very method was the apparent reason why the negotiations with Albania and North Macedonia were interrupted a few months ago, but we all know that the future prospects of these States’ concerns were worrying. In all of this, in the Commission’s proposal, the issue of security is in fact only mentioned, in the face of a clear mandate that European citizens have given us to protect and defend this Europe”, she said.

[EWB Interview] Fajon: There is some progress in Serbia, but not the results we want to see

Zaev: EU cannot expect the resolution of Kosovo issue if it does not reward Skopje