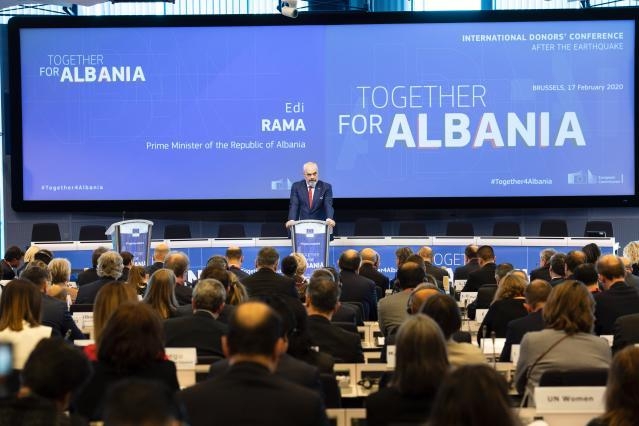 BRUSSELS – 1.15 billion euros is the total amount of donations to Albania following the devastating earthquake that hit the country on 26 November last year, gathered at today’s International Donors’ Conference organised by the EU in Brussels.

“This is beyond my wildest imagination”, commented the Prime Minister of Albania Edi Rama after the final amount was announced.

The Conference gathered EU Member States, countries of the South Eastern Europe and the world, as well as international organisations and financial institutions. The biggest individual donors apart from the EU were Italy, France and Germany, which all pledged more than 10 million Euros of financial support. United States of America pledged 800.000 US dollars.

Prime Ministers of Serbia and North Macedonia, President of Montenegro and the representatives of Kosovo and Bosnia and Herzegovina also offered their financial support which exceeded 2.5 million Euros, with 2 million coming from Serbia.

In his opening speech, Prime Minister Rama thanked all the donors “from the bottom of his heart” in multiple European languages. He emphasised that the damage caused by the earthquake amounted to 6,4% of Albania’s GDP.

He also said that, in addition to physical earthquake in November, Albania was also hit with a political earthquake in October, when the European Council failed to open accession negotiations with this country and North Macedonia.

“For people who lost their loved ones in the earthquake, the November was the worst event ever, but for other, the October decision seemed to once again show the curse of history”, said Rama, adding that Albanians felt hurt and humiliated.

“I am grateful for how European Commission helped us through both of the earthquakes”, said the Prime Minister.

The amount of 1 billion Euros had already been mentioned earlier in the day, by the President of the European Commission von der Leyen, who said that this is the estimated cost of reconstruction.

She also commended the people of the Western Balkans, who “reunited in solidarity” to help the Albanians after the earthquake, without political divides.

President of the European Council Charles Michel said in his speech at the Conference that Albania and the Western Balkans are an integral part of Europe.

“We have a common history and heritage, but also a common future”, Michel said.

Kosovo parliament to vote on the new coalition government