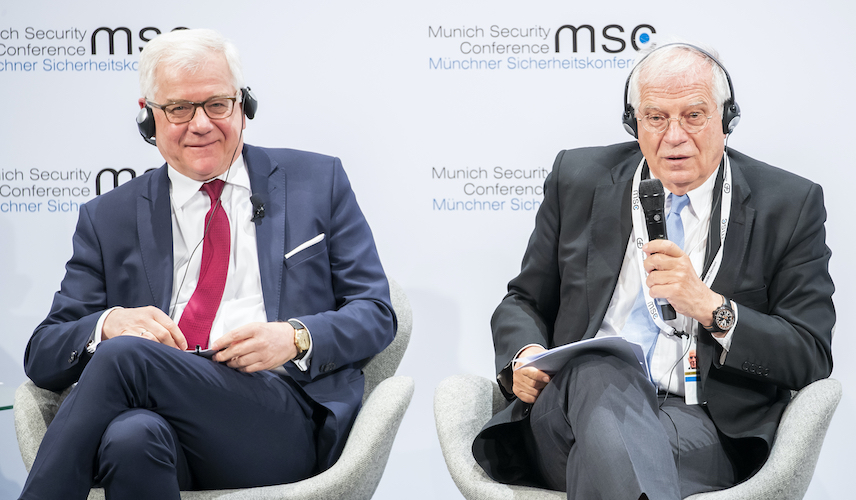 MUNICH – The European Union should seek to establish a common strategic culture and be more decisive when it comes to foreign policy, said the EU High Representative for Foreign and Security Policy Josep Borrell at the Munich Security Conference 2020.

Speaking about the benchmarks in terms of projection of the EU on the global stage, Borrell said that in an ideal case the EU could make peace between Israel and Palestine and Libya, solve the crisis in Venezuela, and finalize the negotiations between Serbia and Kosovo, but that it is not realistic for these things to happen.

“Western Balkans, as well as Libya, is one of the parts in the world where peace could be made and the problems solved in the near future“, he explained.

Regarding future EU foreign and defence policy he said that EU needs to develop common strategic culture and use less the unanimity voting procedure.

“We have to go less and less with unanimity principle, and to act based on the creation of the coalition of the willing inside the EU.  We also need our strategic vision of the world“, Borrell said and added that EU needs to develop a common understanding of the threats.

Speaking about the power of the EU in the world, he said that Europe needs to develop appetite to power, willingness to act not only to comment.

“We need to build our military power but also the power in climate diplomacy and act more assertive in area of protection of the human rights“, Borrell explained.

Does the EU need hard power?

Speaking about the relations of the EU with Russia and the USA, Le Drian said that discussion with Russia should be established and that USA is still a country who shares the same values as the EU.

“We believe that the geography can be a burden if there is distrust between us and Russia. Actions that have been taken do not mean that we should not have a discussion with Russia“, Le Drian said , and added that responsibilities in relation to the invasion of Crimea will be respected, but we still have a lot in common with Russia.

Le Drian said that EU should adapt to the new strategic thinking of the United States, because it is happening that the EU and the US are not always on the same page.

“USA wants to end the Iran nuclear deal and I believe that the EU does not share this kind of thinking and that we see this problem differently”, he pointed out.

Le Drian concluded that, despite the differences, the EU cannot defend itself without the assistance of the USA.

Speaking about the strategic culture of the EU, Polish Minister of Foreign Affairs Jacek Czaputowicz stated that there are differences when it comes to the common understanding of threats.

“We in East know that the greatest threat to us is Russia, and for example Italy does not feel threatened by Russia, which is why we do not have a common strategic culture“, Czaputowicz said and added that Eastern Europe needs protection.

Czaputowicz highlighted the essential role of NATO when it comes to protection and said that the EU should remain only a normative power who works in aspects such as increasing resilience, building physical connection such as roads and promotes trade and building a digital single market.

“The EU needs to appreciate the involvement of the USA because it is based on the common values and shared democratic system“, said the Polish foreign minister, adding that USA is not an external power to the EU, even though there are differences when it comes to issues such as trade.

Czaputowicz also disagrees with Borell that unanimity should be replaced with qualified majority voting.

“I do not think that it is a good idea for example to open negotiation with North Macedonia and Albania without French approval“, he mentioned as an example.

Council may discuss new methodology on 25 February, definitively in March

1.15 billion euros to Albania after the earthquake