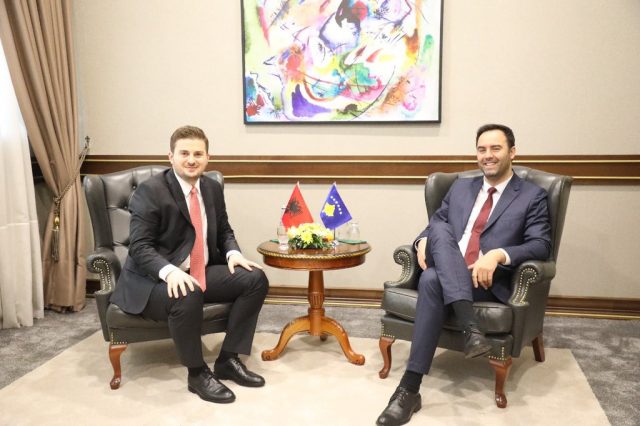 PRISTINA – The Albanian Minister-in-office for Europe and Foreign Affairs Gent Çakaj and the Foreign Minister of Kosovo Glauk Konjufca met today to discuss the establishment of common economic space for free movement of people, goods & capital between Albania and Kosovo and the possibility of founding shared embassies of Kosovo and Albania around the world.

Great meeting with @HashimThaciRKS . Emphasized the need to deepen cooperation between 🇦🇱🇽🇰 and strongly support the coalition of Albanian political parties in Preshevo Valley. Expressed the gratitude for Kosovo’s support after the earthquake in Albania too. pic.twitter.com/JmWrioVwyD

At a joint news conference after the meeting, reports Turkish  Anadolu News Agency (AA) Çakaj and Konjufca stressed that Albania-Kosovo cooperation must be deepened.

“The borders between the Republic of Kosovo and the Republic of Albania should not exist at all, they should be removed immediately and our countries should enjoy unrestricted freedom of movement and unhindered ability to deepen economic cooperation”, said Çakaj according to AA.

Konjufca reminded that the dozen of agreements that had been signed so far should be implemented and that, despite the great work that has been done so far, there is still room for further cooperation.

AA also reported that Çakaj and Konjufca highlighted the fact that joint consulates of Albania and Kosovo have opened so far in Bari, Munich, Copenhagen, as well as a joint embassy in Canberra.

Çakaj noted that he proposed creating a common political platform to lobby for recognition of Kosovo and to exchange practices in the Euro-Atlantic integration process.

During his visit to Pristina, Çakaj also met with the President of Kosovo Hashim Thaçi, the Prime Minister of Kosovo Albin Kurti and the Assembly Speaker Vjosa Osmani.

Commenting on the meeting with Kurti on Twitter, Çakaj wrote that among the topics of the meeting there were “the ongoing process of unifying our embassies, developing a fully integrated diplomacy and create a common foreign policy platform.

This was Çakaj’s first visit to Pristina since Kosovo has elected the new government.