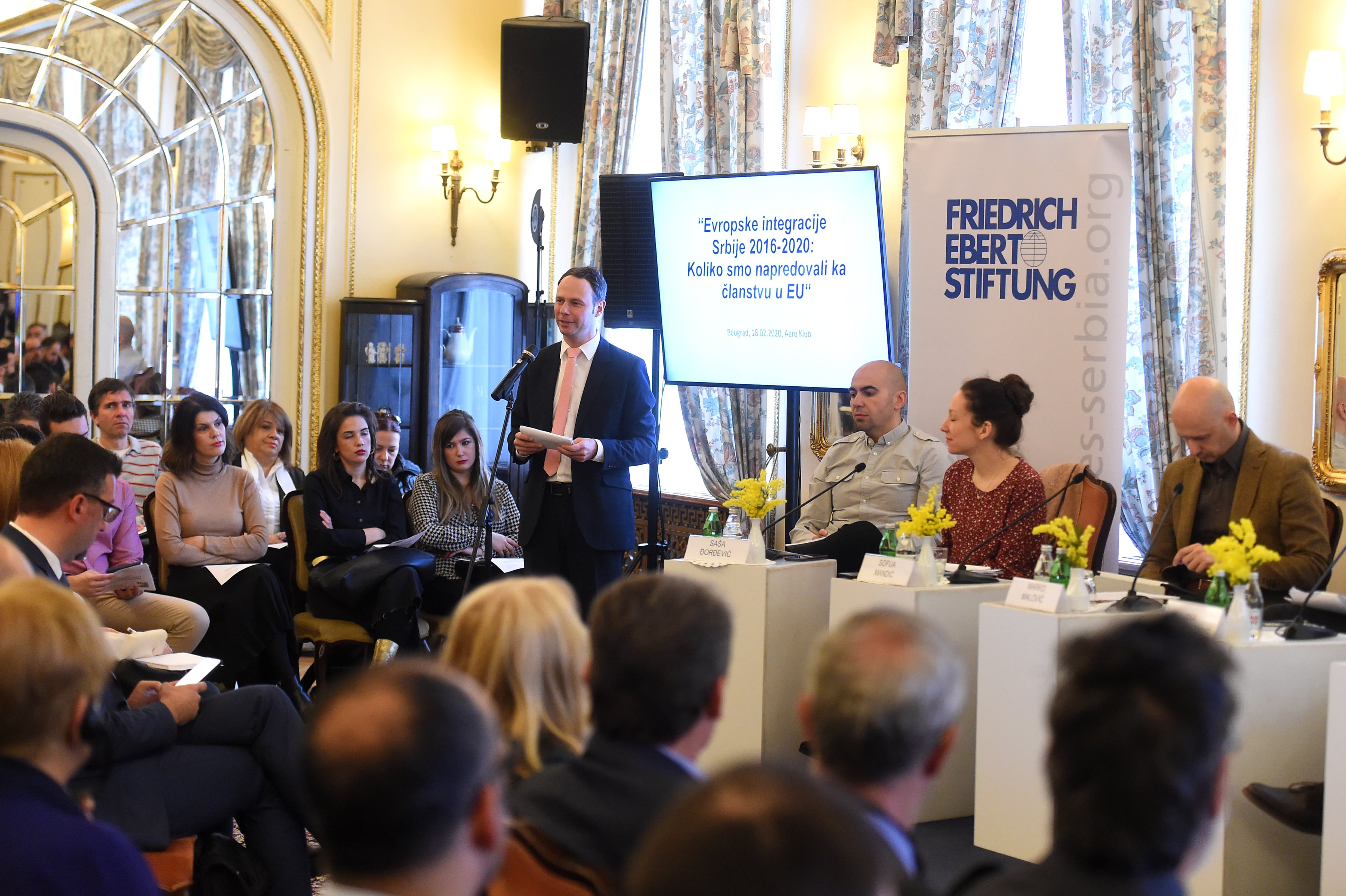 BELGRADE – Negotiation process of Serbia with the EU is not used enough for reforms, as the political will and commitment were lacking. Serbia did not achieve enough in the fight against corruption and organized crime, reform of the judiciary and in dialogue with Pristina. Serbia does not have a consistent growth strategy. Most of the progress was achieved before the start of the accession talks.

These were some of the conclusions of the Panel discussion organized by the Friedrich-Ebert-Stiftung (FES) and European Western Balkans portal on EU integration of Serbia and state of play in opened Chapters 5, 17, 23, 24, 30, 32 35 and provisionally closed Chapters 25 and 26.

Nemanja Todorović Štipija, Editor in Chief of the portal European Western Balkans set the scene for the discussion by stating that there is a lack of enthusiasm for the EU integration process in Serbia.

“In Albania, there is big enthusiasm for the EU integration process, which I noticed does not exist anymore in Serbia”, he pointed out.

Quality of education did not improve much

Speaking about Chapters 25 on Science and Research and 26 on Education and Culture, Ana Vušurović Lazarević from the Center for Education Policy, said that these are only two chapters being provisionally closed.

“The content of these chapters is in the competence of the member states and there are no rules in the acquis to be transferred. The content of the chapters does not include the whole systems but it encompasses mixes of policies where the EU is interested in with set goals and indicators”, said Vušurović Lazarević.

“When we speak about the quality of education, even though strategic documents have been adopted, PISA and TIMSS tests do not provide evidence that we have achieved much success”, Vušurović Lazarević said and added that Serbia only dedicates 0,36% of the budget for science, which is far away from 3% recommended by EU.

“Even though we have raised the share of populations involved in pre-school, primary and secondary education, lifelong learning is far beyond expectations of the European Union”, Vušurović Lazarević said.

GMO – the biggest challenge in Chapter 30

Chapter 30 on External Relations, dealing with the harmonization with the EU policy on external trade contains obligations that are directly applicable without much of the acquis to be adopted. Membership in the World Trade Organization (WTO) is the main obligation and the challenge, said Igor Novaković from the ISAC Fund.

“There is no political will in Serbia to open the question of the genetically modified organism, which is part of multilateral negotiations. Namely, Serbia forbid the GMO products by the 2009 law, which is not in line with the WTO rule that absolute banning of trade in this regard is not permitted”, Novaković said and added that instead of absolute ban we should foresee the system of control.

Novaković pointed out that we have challenges when it comes to the bilateral negotiations as well, with the four countries, namely with the United States on GMO, with Brazil on meat export and with Russia and Ukraine.

“Additional problem is that since 2014, Serbia does not have a permanent representative in the World Trade Organization”, he concluded.

Speaking about the Economic and Monetary Policy as part of Chapter 17, Marko Malović, University Professor said that the key players in this area are the National Bank of Serbia, Ministry of Finance, Ministry of Economy and Statistical Office of Serbia.

“We have progressed in all these aspects according to the report by EU Commission, but there is gaping disconnect between the state of affairs in monetary and exchange rate policy, where we maintain pretty high standards and demonstrated visible progress and macroeconomic and fiscal policy milestone where we detected only limited progress”, he pointed out.

He also said that Serbia lacks a consistent growth strategy.

“EU membership ambition per se cannot be effective economic growth strategy and same goes for fiscal consolidation, and subsidies scheme of Foreign Direct Investment”, Malović explained and added that industrial policy strategy and smart specialization strategy offer an only a glimmer of hope.

Nemanja Nenadić from Transparency Serbia said that the first laws and regulations since the 2000s on Chapter 5 which covers public procurement, public-private partnership and concessions and Chapter 32 on financial control, aimed to cover the larger part of the EU acquis.

“These are the regulations where the EU has its own interest, but the interest of Serbia and our society to regulate them is far larger”, Nenadić explained.

„Keyword is lateness because key point in time for the harmonization with new directives in these areas already passed because there is no political will for reform“, Nenadić pointed out and added that we have a lack of administrative capacity, misunderstanding what is the role of internal audit.

As the greatest problem in these areas he mentioned bilateral agreements by which Serbia borrows funds and takes the obligation to hire a company for works from particular countries, which is bad for the EU and for us, because it causes distortion in public procurement system“, he explained.

Chapter 35 named “Other issues” contains the content of normalization of relations between Belgrade and Priština and does not have the acquis to be adopted, said Nikola Burazer from Centre for Contemporary Politics.

“This is the mechanism for monitoring of the process that is on-going under the auspice of the EU”, Burazer explained and added that Serbia became a candidate country in 2012 when dialogue started on the political level and opened negotiation in 2014 after the first Brussels Agreement was signed.

“With the tariffs on goods from Serbia and Bosnia and Herzegovina the dialogue stopped and now we have a new administration in Brussels and new Government in Priština which offers an opportunity for the fresh start, but the first meeting between Vučić and Kurti does not offer much hope”, Burazer concluded.

Saša Đorđević from Belgrade Centre for Security Policy said that in Chapter 24 on Justice, Freedom and Security there is progress in areas where there is strong pressure from EU.

“System of asylum and migration is one example, as well as visa policy on which EU insisted in light of the migration crisis. Still, there is the integration problem of the people coming to Serbia and partly because of this, only a fraction of people remain here”, Đorđević pointed out.

He also said that fight against organized crime is an absolute failure which is observed by the EU Commission as well.

“There is only public display of massive arrests carried out by the Ministry of Interior Affairs, without epilogue on the court”, Đorđević explained and added that one of the greatest problems is that the role of Prosecutor for Organized Crime is not visible, but only the work of the Ministry of Interior Affairs and political bodies is being promoted.

“Reform of the police is about guaranteeing operational independence of policy, which means that professionals could work on their cases without political pressure. If this is the case, we would have epilogue of the Sava Mala case”, Đorđević explained.

He concluded that enthusiasm is lacking for EU integration, because there is no “visa liberalization” carrot-like in 2009, and Government is not sending a clear political signal that wants to join the EU, instead there are more talks about the action plan and bureaucracy.

Not much progress is achieved in the judiciary reform

Chapter 24 and Chapter 23 on Judiciary and Fundamental Rights cover the areas that are deeply interconnected, but according to Sofija Mandić from the Center for Judicial Research (CEPRIS) in this area, most of the work is done by the judiciary and civil society.

The legislative and executive branch of power is hindering reforms, she concluded.

“When it comes to the Constitution amendments, the Ministry of Justice has developed 5 draft versions of the amendments, which is not in line with the Constitution and every version was worse than the other. Formally speaking, the selection of judges and prosecutors was transferred from National Assembly to judicial councils, but they are according to proposed amendments, staffed with politicians”, she explained and added that so far National Assembly did not discuss the proposed amendments.

Mandić also said that the reform process was often hindered by the elections, namely presidential elections in 2017 when the work of the National Assembly was paused for six months and then the elections in Belgrade in 2018 in which President and the Government were actively campaigning.

“Nothing was done when it comes to the transferring of the budgetary competences to the judiciary, and there are no explanations why”, Mandić said and added that the case backlog is large – some judges and prosecutors have 700 and 1000 cases but the assessment of the administrative capacities was not done yet.

Step forward when it comes to the EU values

Srdjan Majstorović from the European Policy Centre (CEP), wrapped up the discussion and gave an overview of the European integration of Serbia since 2000 by concluding that Serbia achieved only modest progress and that could be done much better.

“From the perspective of the EU values, we made a step forward in the last couple of years. Our benchmarks are Copenhagen criteria and from that perspective, there is a worrying level of hate speech which leads to the further division in Serbian society”, Majstorović have also said that when it comes to the economic developed there is little progress in key areas such as public administration reform, reform of public enterprises and tax authorities.

“We lack administrative and institutional capacities and unequivocal will to implement reforms more ambitiously. The whole process is being opportunistic from our side, so we do not change if there is no direct reward”, Majstović explained.

As the problems in the EU integration process, Majstorović also mentioned a low level of harmonization with EU acquis according to the NPAA, decreasing of administrative capacities, an unfavorable narrative on EU and bad coordination of the whole process.

“There is a need for faster reform in the area of fight against corruption, public procurement, control of migration, foreign and security policy, protection of environment and energy. We also need better coordination of the process, the stronger role of the Prime Minister, stronger administrative and financial capacities and process to be more inclusive”, Majstorović said.

He also pointed out at the lack of EU integration ambitions by pointing out that the Council of Coordination Body for EU integration met only once or twice in the last 5 years and that Serbia still does not have the Chief of the Negotiation Team, after Tanja Mišćević resigned in the September 2019.