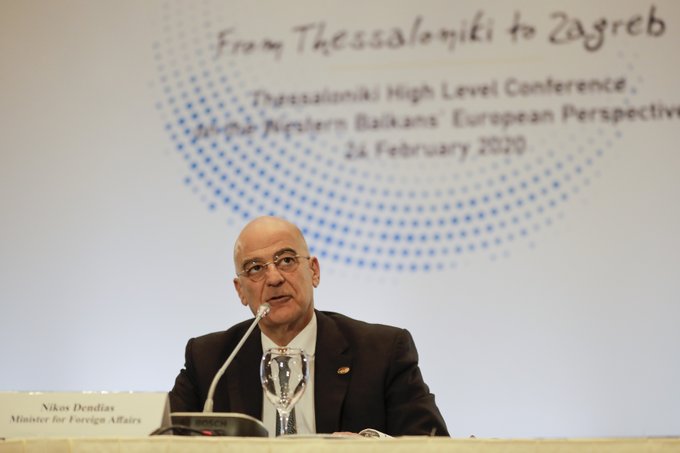 THESSALONIKI – Europe cannot exist as a whole, stable and prosperous alliance without integrating the Western Balkans. This was one of the messages from today’s Conference on the European Perspective of the Western Balkans “From Thessaloniki 2003 to Zagreb 2020”, reports Tanjug.

The Heads of Diplomacy of Greece, Croatia (EU Council Presidency), Romania, Bulgaria, Italy and Slovenia (the EU Member States participating in major regional initiatives), as well as representatives of the EEAS, the European Commission and partners from the Western Balkans met today in Thessaloniki, where discussed the upcoming EU-Western Balkans Summit in Zagreb, which is taking place in May this year.

The Minister of Foreign Affairs of Northern Macedonia, Nikola Dimitrov, stressed that this was a very symbolic gathering, given that it was held in Thessaloniki 17 years after the first Summit in Thessaloniki in 2003 when Europe promised the Balkans that its future was with the EU.

“It is also a call to adopt decisions for accession negotiations with Northern Macedonia and Albania before the Zagreb Summit,” Dimitrov concluded.

The Foreign Minister of Montenegro Srđan Drmanović also expressed confidence that the decision to start EU accession talks with Northern Macedonia and Albania would send a positive signal for enlargement policy and further reform activities in the Western Balkans, announced the Foreign Ministry of Montenegro. “In this regard, encouraging messages from the new European Commission, stating that one of their priorities will be the enlargement process,” said Drmanović.

The conference participants expressed the expectation that 2020 could be a better period in terms of the negotiation process, in which candidate countries must continue to be committed to work, but also that the EU would return with dedication and renewed energy to the enlargement process, stated the MFA of Montenegro in a press release.

According to reporting by Tanjug, Serbian Foreign Minister Ivica Dačić said that the most important thing is that the enlargement policy remains on the agenda of the European Union (EU) and that the Western Balkans region has a European perspective.

The host of the conference and Greek Foreign Minister Nikos Dendias once again recalled that the Greek government is determined to help the Western Balkans achieve its ambitions to join the EU, according to Greek news portal Ekathimerini.

Šekerinska: Security in the region has never been higher in the last 30 years

Várhelyi: EU remains committed to development of connectivity between the EU enlargement and neighbourhood regions