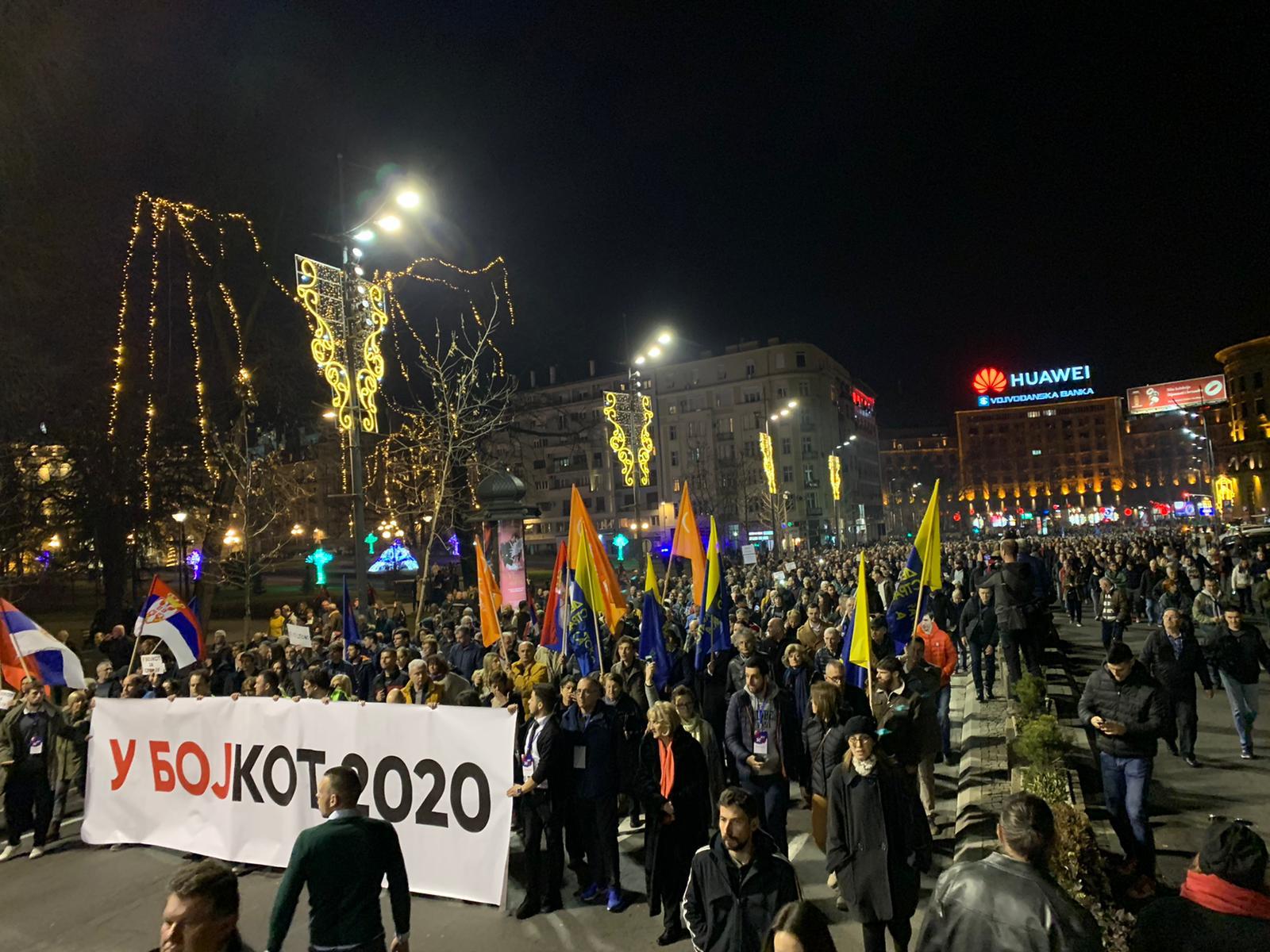 BRUSSELS – Democracy in Serbia is in capture, not by the opposition’s decision to boycott the election, but by the President of Serbia and his party, whose actions brought Serbia into political crisis, opposition leaders and presidents of People’s Party and Free Citizens Movement (PSG) Vuk Jeremić and Sergej Trifunović wrote in the author’s articles for Euractiv, in response to the author’s text of Serbian President Aleksandar Vučić.

Trifunović recalled that the PSG last month declared a boycott of the election after all other avenues of trying to find a common solution with the government to improve election conditions.

„If the situation is as rosy as the President claims, why has Serbia dropped in all worldwide rankings on freedoms and democracy? If the President was right, why would the OSCE be sending the largest election observer mission in the last decade to Serbia? Would the European Parliament have engaged in dialogue with the government and opposition in trying to improve electoral conditions?,“ Trifunović wrote.

Trifunović stressed that PSG was the first and only political actor who called the European Parliament last summer to help with the dialogue between the government and the opposition, as well as to engage in all rounds of EP mediated dialogue resulting in the 13 December 2019 agreement.

„PSG considered that the key elements of any agreement that would lead to more free and fair elections were media freedoms and rule of law. In this context, that included the appointment of new REM (Regulatory Authority on Electronic Media) members, which was covered by the 3+2 formula, the opening of state television RTS and other national broadcasters so that they offer balanced coverage, and an end to the abuse of state resources and officials for election purposes,“ Trifunović stated.

He stressed that the Government of the Serbian Progressive Party failed to deliver on the points of the said agreement and that it broke all the promises made not only to the opposition and citizens but also to the European Parliament, who facilitated dialogue between the authorities and the opposition.

Regarding the election of the first three REM membres, Trifunović pointed out that the process did not proceed in accordance with the agreement reached because the candidates for those positions were affiliated with the ruling parties and thus were not acceptable to PSG.

„For the other two REM members, the process only started at the end of January and is still ongoing. Thus REM, which is crucial in monitoring and sanctioning media that break standards and laws, is not yet impartial or properly functional, one month before an election campaign is to start“, Trifunović wrote.

In the author’s text for Euractiv, Trufunović recalled that, in accordance with the agreement, it was agreed that Radio Television of Serbia (RTS) would follow „BBC standards“. He concluded that some progress has been made with the RTS, but that there is still no balanced coverage of all actors from the political scene, as well as objective news and interviews.

„PSG underlines that the massive corruption scandals, criminal activities and abuse of office by a vast cadre of government ministers, receive almost no mention on RTS and thus considers that the points of the agreement about the national broadcasting network are not delivered by government,“ Trifunović stated.

PSG did not easily make the decision not to participate in the elections, Trifunović said, adding that they tried to be constructive and offer clear and achievable results, and ultimately sought dialogue with the European Parliament.

„We did all this in the scant hope that we would be able to secure better electoral conditions and improve the media situation in the country. This has not happened and we were left with no other option but to use the only method left available to draw attention to the massive democratic deficits in Serbia, by not partaking in such unfair and illegitimate elections“, Trifunović stressed.

In his point of view, Serbia is captured state with captured media perhaps worse than it was in North Macedonia when EU resolved the political crisis in 2015, as can be seen in the Commissions’ progress report on Serbia, the World Press Freedom Index and other relevant research.

„There is no democracy in such a captive state, no free and fair elections“, Trifunović concluded.

Vuk Jeremić reiterated that democracy was attacked in Serbia, but that its attacker is Aleksandar Vučić, not its defender.

„His regime is actively wrecking the basic tenets of democracy, not championing them. Literally every sentence of his essay-like most of his public addresses – is either outright false or deliberately misleading. For instance, Vučić manifestly lies in writing that Serbia’s public debt is consistently being reduced,“ Jeremić wrote.

He stressed that reducing the parliamentary threshold from five to three per cent is a serious breach of the Venice Commission’s Code of Good Practice from 2018, which says that the basic elements of electoral law, especially the electoral system itself, should not be changed less from one year before the elections.

“Vučić made this decision only after it became clear that Serbia’s democratic opposition would stay the course in our commitment to boycott his sham elections,” wrote Jeremić adding that the threshold reduction is an integral element of his latest strategy to create, coopt, and prop up fringe political movements and parties to serve as his puppet opposition.

Jeremić recalled a report by Freedom House that no longer qualifies Serbia as a free country and that the direct consequence of Vučić’s galloping despotism is a loss of hope for a better future for citizens, as evidence by alarmingly high rates of emigration.

“Hundreds of thousands of Serbia citizens – most of them young and educated – have left since he came to power more than 8 years ago, with the IMF projecting that we’re on track to lose 20% of our workforce over the next three decades”, Jeremić wrote, adding that citizens of Serbia are having fewer children than ever before in history – including during both world wars.

Žbogar: I am not worried about implementation of “3-6-9” plan