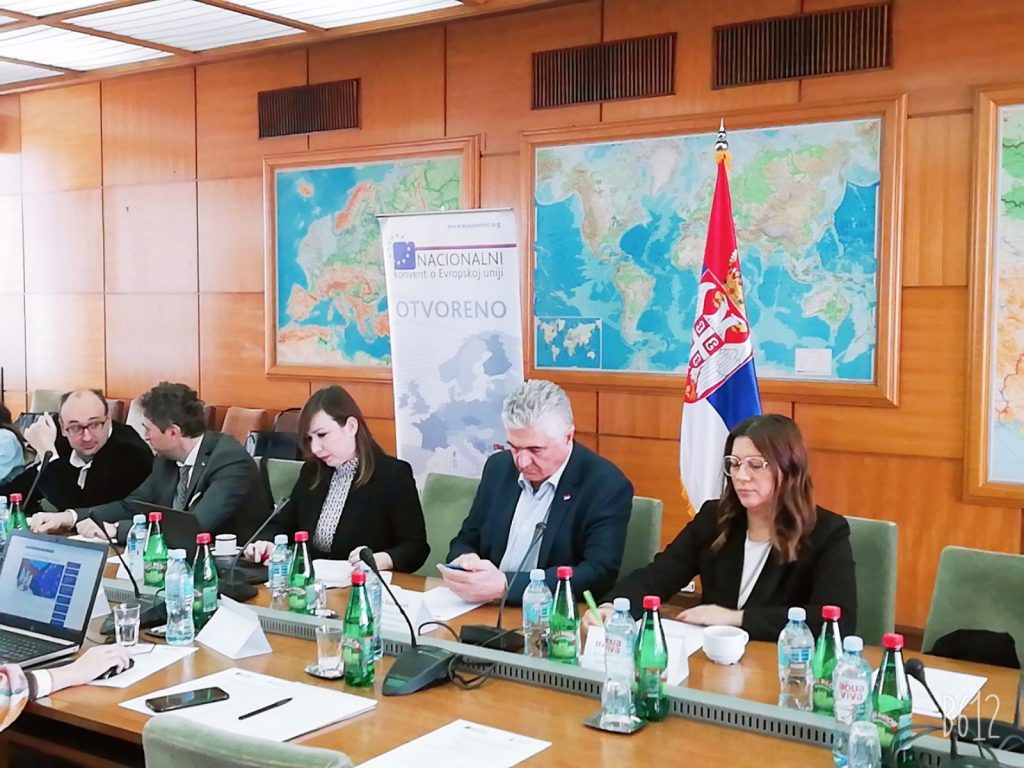 Consultation session of the Working Group for Chapter 23 of the National Convention for the EU (NKEU); Photo: Twitter/NKEU

BELGRADE – The revised Action Plan for the Chapter 23 contains most of the shortcomings it had before, although a large number of comments provided by the European Commission regarding the revision have been adopted, civil sector representatives say in the aftermath of the second cycle of consultation of the Ministry of Justice with the Working Group for Chapter 23 of the National Convention for the EU (NKEU). The second session of the second cycle of consultations was held on 25 February. The audit, which has been ongoing for the past two years, is expected to be finalized in April.

Chapter 23 – Judiciary and Fundamental Rights is one of the most important chapters in the accession negotiations with the EU.

The February 25 consultation session was dedicated to discussing parts of the Action Plan related to the judiciary and the fight against corruption, which were previously aligned with the comments of the European Commission. For this reason, this consultation cycle is of particular importance for monitoring Serbia’s progress.

“The revised Action Plan contains most of the shortcomings that have been noticed before. Even though four years have passed since the adoption of the Action Plan and many activities were not carried out even ‘on paper’, it is quite clear that there was no effective mechanism for solving the problem, such as the delay of the Ministry with the preparation of changes to the law”, Program Director of Transparency Serbia Nemanja Nenadić told EWB.

“A large number of comments of the European Commission regarding the revision of the Chapter 23 Action Plan have been accepted, especially in the area of ​​developing indicators and assessing the impact of strategic documents that have expired or are near expiration”, said the EU Integration Committee Adviser and Human Rights Coordinator and NKEU Task Force Coordinator for Chapter 23 Jovana Spremo in a written response to EWB.

She points out that the review process should be brought to an end, so as to allow “a start of monitoring Serbia’s progress with EU reforms at full capacity, taking into consideration that the bodies have been overloaded with the audit for two years now”.

“It goes against the meaning of the audit”, stressed Spremo.

For Nenadić, the proposal to form a new Government Coordination Body does not represent any assurance that such problems will be addressed.

“If there was political will indeed, all issues within the competence of the Government could be solved at sessions of that body, and those issues related to the work of other bodies, at sessions of the National Assembly and its committees,” said Nenadić.

Most of the comments were made by the members regarding specifying activities related to amendments to the Constitution and judicial laws, insisting on the drafting of a new text by the competent committee of the NSRS and sending this text for opinion to the Venice Commission and other relevant Council of Europe bodies.

“There are still ‘invisible traces’ of amendments made outside the regular procedure, which must absolutely be removed,” states Spremo.

With regard to other comments, Spremo states that NKEU insists on introducing activities to adopt a new or revision of the existing National War Crimes Processing Strategy, which expires this year. They are also pushing towards the development of activities regarding the prosecution of high-ranking perpetrators, which is required by the transition criterion.

“Most of the comments regarding the fight against corruption were related to the functioning of the envisaged coordination mechanism, the effects of the Law on Public Procurement and the necessary amendments to the Criminal Code.

Nenadić notes that some activities have already been dropped from the Action Plan as “allegedly already implemented”. He points out an example of alleged improvements to the Law on Public-Private Partnerships, with the assessment that there were no significant changes.

“There are no new activities planned to address the problems left out in Chapter 23 APs and the previous anti-corruption strategy plan, such as bypassing bidding through interstate agreements or managing public companies,” concludes Nenadić.

As agreed at yesterday’s meeting, the NKEU Task Force on Chapter 23 will submit an integral comment on the document by March 13, after which the Ministry of Justice will align the current version with the proposals. According to Spremo, the process is expected to be completed in April this year.

Bilčik to the opposition in Montenegro: Brussels can not impose solutions for Montenegro