The dialogue between Kosovo and Serbia has been stuck in a deadlock for years. However, during the first phase of the Dialogue – the so-called technical phase – a number of agreements have been reached with the purpose to resolve certain practical issues that citizens face in everyday life and, in that way, to contribute to the overall normalisation of relations between the two parties. Nine years after the beginning of the Dialogue, it is questionable to which extent – and whether at all – this goal has been achieved.

Brussels Dialogue is everywhere, yet no one knows about it

Focus groups that the Belgrade Centre for Security Policy conducted throughout Serbia on the topic of the Brussels Dialogue pointed out to three striking contradictions. The first contradiction is between the great media presence and frequency of the topic of the Brussels Dialogue, on the one side, and the very limited knowledge about it among the general population, on the other. Although the topic is omnipresent and “unavoidable” (as several respondents put it) in the public discourse, the majority of focus groups participants are only superficially informed about the Dialogue – they know that it has been going on for years, they know who the main actors are, but their knowledge about particular agreements is almost nonexistent. Those who follow the news about the Dialogue more closely and intentionally are fewer than those who hear about it “in passing”. However, even among the citizens who are more interested in the topic, very few are well informed, and only a small minority – primarily journalists and activists – are familiar with the details of the Brussels Dialogue and its outcomes.

“I follow the topic, I’m interested […]. Although I’m trying, none of this is entirely clear to me. Previously, I was able to figure out what was signed, and lately it’s been confusing even who signed what.”

One of the reasons for the lack of interest and poor knowledge about the Brussels Dialogue is the extremely low level of trust in media and politicians among Serbian citizens. The respondents showed high awareness of media being manipulated and captured by the government structures. Virtually none of the focus groups participants have trust in media and politicians to inform them properly and justly about the Brussels Dialogue, and a great majority believe that the information about it is being intentionally hidden from citizens. “Lack of transparency” is one of the first associations to the Dialogue that the participants of all the focus group have – regardless of their ethnicity, age, or level of education.

“It is increasingly felt that information is being held in check. Citizens are feeling it and losing trust. The actions of those involved in these agreements can be interpreted in several directions. One gets the impression that the goal is to confuse the public, so to make it accept whatever is served.”

Moreover, the majority believes that there is one Brussels agreement. It is expectable, having on mind that all the media refer to the First Agreement on the Principles of Normalisation of Mutual Relations as to “the Brussels Agreement”, while other agreements are only sporadically mentioned in the public discourse and insufficiently discussed in the media.

The second contradiction is the one between the length of the process and the high number of agreements, on the one hand, and the lack of tangible benefits for “common people”, on the other. Some of the respondents pointed out certain things that – in their opinion – have been improved, but they too admit that the improvements are minor. For example, Albanians from Preshevo Valley mentioned that the agreement on telecommunications made their communication with Kosovo easier – while ethnic Serbs who have relatives and friends in Kosovo are mostly unsatisfied with how the telecommunications function; several participants who travel regularly to Kosovo noted that, after the agreement on vehicle insurance, they do not have to pay anymore 20 EUR per week when they go to Kosovo – while some others insisted that the agreements concerned with the freedom of movement have not changed much on the ground; some of the respondents  (all Albanians and Bosniaks and some Serbs) are of the view that the integration of police and judiciary in northern Kosovo municipalities improved safety of Kosovo Serbs – while others believe that it was not a good move. In general, the majority of our respondents consider the dialogue between Kosovo and Serbia to be a failure so far. A part of them attribute it to non-implementation of the agreements.

“Citizens will have no benefits from the agreements, unless the issues of cadaster, license plates, diplomas, telephone, private property in Kosovo are resolved. That’s what interests the common man.”

“We know Kosovo is lost, but nevertheless…”

The third contradiction is the one directly produced by ethnic nationalism. Attitudes of the majority of ethnic Serbs towards Kosovo seem to be influenced by nationalist narratives – even when respondents declaratively dissociate themselves from nationalism. The decades’ long ideological domination of ethnic nationalism has left a deep mark on the unconscious of Serbian citizens. By the majority of Serb respondents, (Kosovo) Albanians are seen as the ultimate Other and the distinction Us vs. Them always goes along ethnic line. It is notable that many respondents have certain views that contradict each other. For example, many of them point out that Kosovo is “lost” for Serbia, but, at the same time, they are strongly against the recognition of Kosovo independence. Also, some see Kosovo as Serbian property and Kosovo Albanians as some kind of intruders or, at best, guests. A respondent used the following metaphor:

“It is like they moved into my flat against my will. If I sign it off, it will never be mine again.”

Nevertheless, the same respondent admitted that she had never been to Kosovo, which makes the comparison of Kosovo with her own flat – a false one. The dominant ideology at the same time produces such contradictions and neutralises them, enabling peaceful coexistence of opposing views.

The idea of independent Kosovo is unacceptable for almost all our respondents of Serbian ethnicity and seen as the ultimate defeat, even when the respondents do not show ethnic distance towards Albanians. Their stance on Kosovo status structures all their opinions about Serbia-Kosovo relations including those related to the so-called technical issues, which indicates that there is no part of the Brussels Dialogue that can be regarded as non-political. In opposition to Serbia, all ethnic Albanians see Kosovo as an independent state and believe that the main condition for the successful continuation of the Brussels Dialogue is the recognition of Kosovo statehood by Serbia.

“Until they [the parties to the Dialogue] are treated as two states, there will be no real dialogue.”

Some hope for the future

There are two research findings that give reason for certain hope. First, the great majority of citizens of Serbia believe that the Dialogue should be carried on. Although not everyone agrees on how and under which conditions, the common understanding is that the Dialogue has to be more transparent and oriented towards public good. Second, virtually all the participants of our focus groups – regardless of their ethnicity – agree that the Brussels Dialogue so far has benefited primarily the elites in power, instead of benefiting citizens. Therefore, a radical change is needed. These two common points provide conceptual basis for new future alliances and collaborations – those that will cut across ethnic divisions and will be based on political principles. 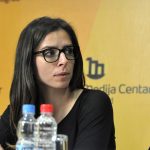 Isidora Stakić has been a researcher at the Belgrade Centre for Security Policy since 2013. She holds BA degree in political science and MA degree in human rights. She is also the Coordinator of the Academic Event and the Analytical Team of the Belgrade Security Forum.