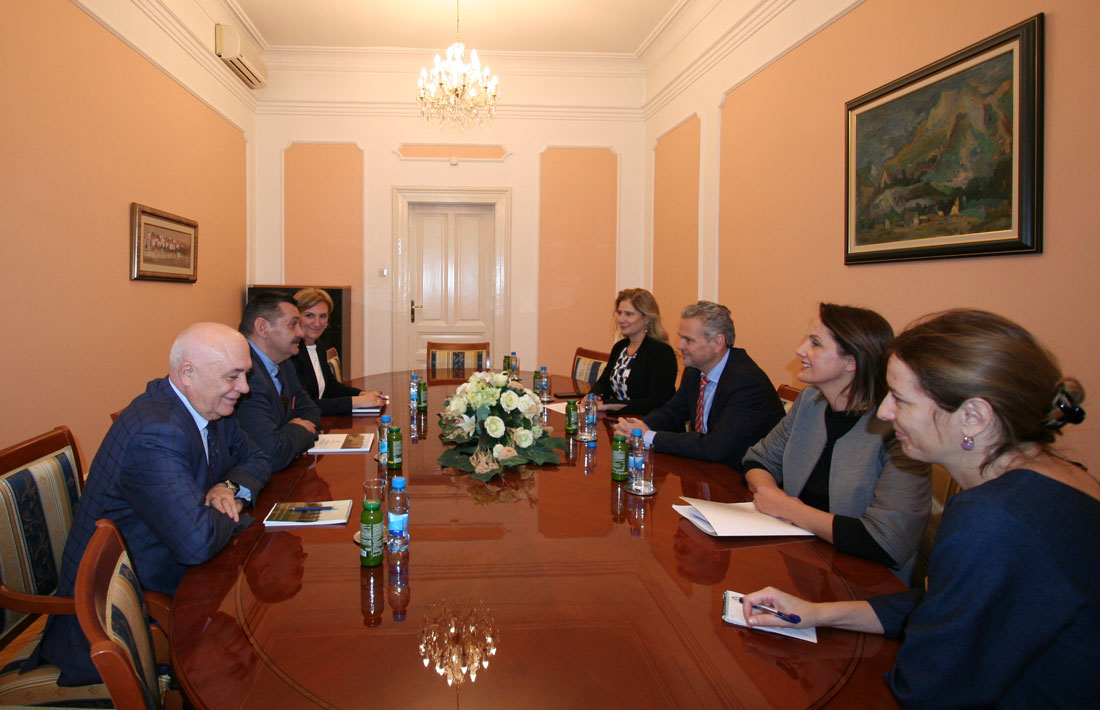 For several weeks now, the public in Bosnia and Herzegovina has been closely monitoring developments in the relationship between the Republika Srpska (RS) leadership and the Constitutional Court. Namely, RS President Milorad Dodik came forward in February with a proposal for a Law on the Election of Judges of the Constitutional Court of BiH, replacing foreign judges with domestic ones.

This declared a decision of the RS Assembly unconstitutional, a decision adopted late last year, declaring agricultural land in the RS exclusive ownership of the entity. Asked by Radio Free Europe about why he proposes the expulsion of foreign judges, Dodik said they were “part of the concept of deconstruction of the Dayton Agreement and deconstruction of the Republika Srpska and the constituent of peoples because they work solely for the interests of Bosniaks.”

The political situation was further complicated when the RS Assembly, provoked by this decision of the Constitutional Court, adopted the Information on the Anti-Dayton Action of the Constitutional Court of Bosnia and Herzegovina and declared the termination of the work of RS representatives in federal bodies. The suspension will, as announced, continue until the proposed law is adopted and the foreign judges are excluded. The Croatian Democratic Union of Bosnia and Herzegovina (HDZ BiH), led by Dragan Čović, joined the request to adopt the law, proposed by the Alliance of Independent Social Democrats (SNSD).

According to researcher from the Austrian Institute for International Affairs, lecturer at the University of Vienna and member of Balkans in Europe Policy Advisory Group (BiEPAG) Vedran Džihić, the proposal of the law to end the mandate of foreign judges and elect domestic is an open attack of Republika Srpska (RS) President Milorad Dodik and the ruling structure in RS on constitutional order in Bosnia and Herzegovina.

“The Constitutional Court is both legally and politically fully legitimate, and every decision it makes is a decision that carries with it a legal obligation for implementation,” Džihić says for European Western Balkans (EWB).

“Now, in a new kind of adhoc coalition between the HDZ and the SNSD, an attempt is being made to change the legal basis on the functioning and operation of the Constitutional Court. All of this and the proposed law, in my view, is an obvious attempt of political blackmail and an attempt to exert additional pressure on the Party of Democratic Action (SDA) and majority Bosniak forces. I do not think this proposal will be passed in the BiH Parliament”, says Džihić.

“Through the latest episode of the crisis, which is happening at a politically delicate moment and in parallel with the open question and tense relationship between Belgrade and Pristina and between Montenegro and Serbia, it comes to the moment that those circles in the international community, which still protect BiH and its territorial integrity, are given an even stronger reason to maintain structures as they are and thus try to preserve some more mechanisms in their hands in the event of even more serious crises in BiH.”

Džihić also reminds that the European Union is currently preoccupied with the issue of refugees on the Turkish-Greek border, and because of that, in Džihić’s opinion, “the most important objective in the Balkans is to maintain at least the make-believe stability with existing structures, such as the Constitutional Court”.

Dodik’s neither first or last blockade

This is not the first blockade of government at the state level, which is used by parties in Bosnia and Herzegovina as a method of political pressure on people with opposing views. We are reminded that after the 2018 parliamentary elections, Dodik’s SNSD blocked the work of parliament and then conditioned the unblocking with the party’s entry into the Council of Ministers. The requirement was eventually fulfilled, and the BiH Parliament first met in November 2019, after more than a year’s break.

Džihić emphasizes that the current blockade is just another in a series of blockades over the past 10-15 years. The result of each of these blockages, the analyst reminds, is “a minimal compromise that further compromises state’s institutions”.

“It often seems to me that blockage politics is a kind of territory marking on principle – this is mine and I don’t touch it, if you touch me and I can block and endanger your territory as well. And that territory has already been mentioned in the domain of clientelistic controls of resources in the quasi-states of the RS, the Bosniak part of the Federation and in the cantons under the leadership of the HDZ BiH”, said Džihić.

The essence of this and any previous blockade of the ruling structure by the RS, Džihić explains, is to preserve the status quo.

“This means, first and foremost, the protection of the power and privileges of parties and politicians in power, and their clientele”, says Džihić and adds that national political parties in BiH are, above all, “machinery for distribution of the means, resources of the state and citizens within their own clientele or clique“. Thus, Džihić explains, the loss of power “would be equal to jeopardizing the very principle of the existence of these parties and their structures”.

“Blockades and the use of binary codes to mobilize citizens are just a facade behind which real material interests are hidden”, Džihić points out. “Of course, the devastating side effect of all these blockages is that through manipulative rhetoric, attention is drawn from the essential problems of society in Bosnia and Herzegovina, such as low living standards in much of the country, poverty, social crisis, and air pollution.”

Republika Srpska’s representatives have been boycotting the work of the Parliamentary Assembly, the Council of Ministers and the BiH Presidency for four weeks. On February 25, representatives of the SNSD, HDZ, and Serbian club in the House of Representatives of the Parliament of Bosnia and Herzegovina submitted to the procedure a joint Draft of the Law on the election of judges of the Constitutional Court of BiH, which provides for the suspension of the mandate of foreign judges as soon as the law enters into force. The law was submitted to the regular procedure. The proponents point out that the law is in line with the recommendations of the European Commission, that it is based on the Constitution.

“The most logical way forward would be to bring together the BiH Presidency and the BiH Council of Ministers, supported by parties that have a majority sufficient to pass all laws but also to amend the BiH constitution, about meeting the requirements for a European Commission recommendation to open EU membership negotiations, one of which is Constitutional Court reform”, Adi Ćerimagić, an analyst at the European Stability Initiative, told EWB.

“Part of the compromise could be that the appointment of three judges by the President of the European Court of Human Rights ceases with BiH’s EU membership. That would make everyone happy and country’s judiciary improved“, Ćerimagić said. He adds that, in addition to changing the Constitution, the list of requests from the European Commission is very long and demanding.

“And in my opinion, it is also unfairly difficult”, he says.

“Therefore, I am not sure how much it can motivate politicians in Bosnia and Herzegovina, because their fulfillment brings with them, from the experience of North Macedonia and Albania, only an extremely uncertain recommendation of the European Commission on opening membership negotiations, and also from the experience of Montenegro and Serbia, a decade’s distant perspective of full EU membership“, concludes Ćerimagić.

Will the law be passed?

The law is due to be brought before the BiH Parliamentary Assembly soon, and at this time it lacks the support of the required majority of MPs. Ćerimagic reminds that the dynamics of the decision-making in Bosnia and Herzegovina over the past 25 years have been determined by its federal structure.

“Passing the law is not impossible, but it requires a compromise of different interests and views”, Ćerimagic says. “Such a compromise is usually only possible after lengthy and patient discussions. Threats, high tones, emotions and the spread of fear are all part of the political life of many European countries and have sometimes been an effective instrument for achieving political goals, but it seems to me that they are increasingly retreating in BiH”.

“Then, the same way as today, the discussion among politicians is reserved for looking into judges appointed by the President of the European Human Rights Court. In my view, this is not enough because the Constitutional Court, as well as the entire judiciary of BiH, is striving for broader and deeper reforms”, Ćerimagić points out.

He also recalls that last year’s opinion of the European Commission, in addition to the procedure for electing three judges appointed by the President of the European Human Rights Court was also referred to as the procedure in which six other judges were elected. “The European Commission correctly emphasized that all judgments of the Constitutional Court of BiH must be respected and enforced, but also concluded that the election of the other six judges is carried out in a politicized procedure that opens the space for them not to be sufficiently independent and professional. That was confirmed by Priebe’s mission at the end of the year”, says Ćerimagić.

The Steering Board of the Peace Implementation Council (PIC, which gathers Canada, France, Germany, Italy, Japan, Russia, the United Kingdom, the United States, the EU Presidency, the European Commission, and the Organization of the Islamic Conference represented by Turkey), expressed unreserved support for the work of the Constitutional Court of BiH and all its judges. In a joint statement, political directors stressed that “the decisions of the Court are final and binding, and the competent authorities are obliged to implement them”. The statement also recalled that the official term “inter-entity line of demarcation” in no way represents the state border or implies the statehood of Republika Srpska. Russia did not accede to this announcement.

The European Commission is expected to issue an Opinion on the Candidate Status and the Analytical Report on Bosnia and Herzegovina in the coming months ahead of the EU-Western Balkans Summit, which is taking place in Zagreb this May. The Office of the Head of Delegation and EU Special Representative in BiH, Johann Sattler, said in February that the BiH authorities “should show a willingness to improve the lives of citizens and make genuine efforts to reconcile and overcome the legacy of the past as an inevitable part of the EU accession process”. The Special Representative stressed that concrete reforms, especially economic ones, are necessary for BiH’s European future.

The work of foreign judges in the Constitutional Court of BiH is regulated under the country’s Constitution. Of the total of nine judges, four are elected by the Federal House of Representatives and two by the National Assembly of Republika Srpska. The remaining three judges, who should not be nationals of BiH or any of their neighboring countries, are elected by the European Court of Human Rights. The presence of foreign judges was introduced after the Dayton Agreement (1995) was signed, with the idea that the international community would ensure neutrality and objectivity in the BiH Constitutional Court.

Hoti: We would rather leave the coalition than break up the friendship with USA