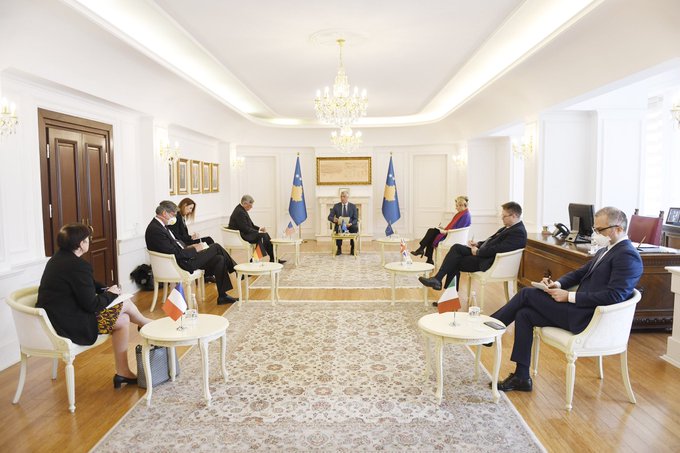 PRISTINA – Kosovo President Hashim Thaçi met with the ambassadors of the Quinta countries and the EU Ambassador in Pristina today to inform them of the steps he will take after the Kosovo Assembly last week declared no confidence in a government led by Albin Kurti. He has previously announced that he is starting consultations with parties today to form a new government, which the Self-Determination Movement (LVV) assessed as a violation of the Constitution, KoSSev reports.

Thaçi said that, after a no-confidence vote on March 25, he would “continuously take steps in accordance with the Constitution of Kosovo, the laws of Kosovo and the duties of the President.”

“Kosovo needs a government that will bring stability, as broad a political and civic unity as possible, inclusive and with a clear Euro-Atlantic orientation,” the Kosovo president said in a statement.

Violation of the Constitution of Kosovo

At Thaçi’s announcement that he would soon begin consultations with parliamentary parties to form a new government, Glauk Konjufca from the Self-Determination Movement assessed Thaçi’s willingness to violate the Kosovo constitution, reports KoSSev.

“There is a fundamental difference between a situation where a prime minister resigns and one in which the assembly passes a motion of no confidence to the government. In the first case, we have a lack of will or ability expressed alone by the outgoing prime minister. In the second case, the government and the prime minister are in power, there is no time in between until new elections, so this has no impact on the stability and functioning of the state. So, in the second case like ours now, we need a new assembly for a new government”, explained Kurti.

“Before requesting the name of a candidate from the Self-Determination Movement, the President must think of an election date. Because he must enforce the Constitution, not interpret it”, said Kurti.

He recalled that this is the third time Kosovo has faced the same situation since 2008 – when the Kosovo Assembly declared no confidence in a then government in 2010, then in 2017, after which the president dissolved the Assembly and called early elections.

Bushati and Asselborn: Albania to open negotiations in 2018