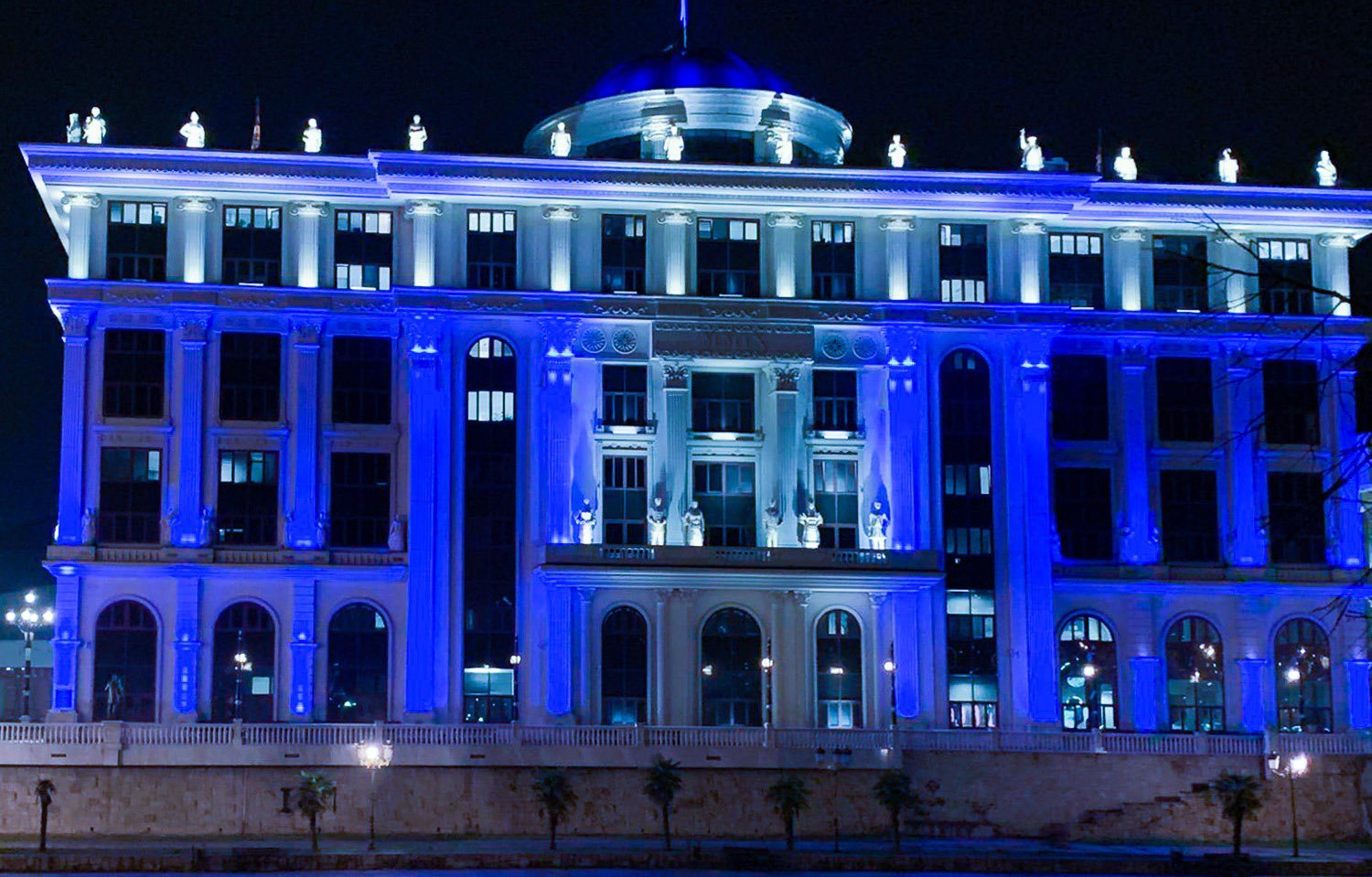 SKOPJE – Last Friday, Noth Macedonia officially became the newest NATO member and on Monday it hoisted its flag at NATO HQ. This concluded a 27 years old process and marked a new chapter in the history of the country.

Although the ceremonies were unconventional and modest because of the COVID-19 pandemic, this did not diminish the significance of the moment. This can certainly be seen from the congratulation messages of many officials on the internet to North Macedonia and its citizens.

“Although due to the difficult period we are going through, we cannot rejoice and mark these events as it should be, these are indeed historic successes that after three decades of independence, finally confirm Macedonian security and guarantee our future. Congratulations to all of you! We deserve it”, concluded Pendarovski.

Prime Minister of North Macedonia, Oliver Spasovski had a short message on Twitter.

“The road was a long one, but the reward that arrived today with the look of our country’s flag at NATO headquarters in Brussels – we deserved it”, tweeted Spasovski.

On Friday, Nikola Dimitrov, Foreign Minister of North Macedonia, after depositing the accession instruments through the US Embassy in Skopje in the State Department, congratulated all citizens of North Macedonia.

“Just a few moments ago, we became a full member of NATO, which we started back in 1993. The 27-year old path ended a few seconds ago”, said Dimitrov and added that he will be the first minister of North Macedonia to attend a NATO ministerial meeting on April 1 through a video conference.

“Congratulations. Today we came under the umbrella of collective security that is protecting a billion people around the globe”, said Radmila Šekerinska, North Macedonia’s Minister of Defense.

Šekerinska congratulated the troops and said that the armed forces have restored dignity and the country has demonstrated dedicated care to its soldiers that are now part of the NATO armed forces.

“We weren’t given NATO membership, we worked hard for it and we earned it after many difficult reforms and after producing tangible results”, concluded Šekerinska.

Zoran Zaev, President of SDSM, former Prime Minister of North Macedonia and the man who had a pivotal role in reaching the Prespa agreement also congratulated on his Twitter account.

“Today is a great day for our citizens and the homeland. The Macedonian flag proudly flies in front of NATO headquarters along with the flags of the other 29 members. This is a realization of the decades-long aspiration of generations of citizens and a confirmation of the courageous steps we have taken”, wrote Zaev on his Twitter account.

Officials of the opposition VMRO-DPMNE party did not react on Twitter, but the party itself issued a brief statement on its website in which it congratulated the citizens.

“VMRO-DPMNE congratulates all citizens of the Republic of Macedonia and them on their membership in NATO, which is a realization of our strategic aim and is the result of completed reforms and hard work done for many generations before”, reads the statement.

NATO officials were also delighted to welcome North Macedonia into its ranks. On Monday, during the hoisting of the flag ceremony, Secretary General Jens Stoltenberg spoke about North Macedonia’s NATO path.

“This is a historic moment for North Macedonia. It comes after years of perseverance, determination, and commitment to reform. In the best spirit of the Alliance, and through political courage and vision, North Macedonia and Greece reached a historic compromise over the name issue”, said Stoltenberg and congratulated people of North Macedonia.

“I still remember my visit to Skopje in July 2017 when I witnessed the genuine efforts to achieve this successful result”, wrote Ildem on his Twitter account.

Speaking about the flag-raising ceremony, Robert Pszczel, Senior Officer for Russia and the Western Balkans at NATO Public Diplomacy Division, wrote on his Twitter account that these ceremonies matter.

“These ceremonies matter – I still retain vivid memories of the event which took place in 1999. Even if we could not join the flag raising today, many of us have watched on NATO website. Congratulations to our friends and now Allies from North Macedonia”, wrote Pszczel.

President of Montenegro, Milo Đukanović sent a greeting card to North Macedonia congratulating it on its success.

“Montenegro truly celebrates your deserved success, which is the guarantee of a more prosperous and safer future for the entire region. Our political relations and traditional friendship are strengthened now”, the greeting card states.

He further pointed out that reception of North Macedonia into NATO is another proof of resolve and strong commitment to open door policy and value of partnership, solidarity and mutual support.

Bosnia and Herzegovina Presidency Member Željko Komšić congratulated Stevo Pendarovski on the occasion of the official accession of North Macedonia to NATO.

“President Pendarovski, please accept my sincere congratulations on the accession of North Macedonia to the friendly North Atlantic Treaty Organisation. Furthermore, I send my best wishes to citizens of North Macedonia who have made a tremendous contribution to this great and significant step for your country and for the whole region”, states the letter.

Glad to welcome to our Alliance, the #30th Ally. Congratulations to our valued neighbor North Macedonia for this historical achievement. Together we are stronger and will contribute to regional security and stability! #WeAreNATO @Dimitrov_Nikola

Glauk Konjfuca, Kosovo Minister of Foreign Affairs and Diaspora also congratulated North Macedonia’s Foreign Minister saying that “this is excellent news for the stability and security of North Macedonia and the whole region”.

One of the first officials, besides NATO’s, who congratulated North Macedonia, was Ursula von der Leyen, President of the European Commission.

“Congratulations to North Macedonia for joining NATO, a well deserved step. Now, I look forward to working closely with North Macedonia during accession negotiations to join the EU, as Member States gave the green light this week to start accession talks. Its future belongs in the EU”, stated von der Leyen on her Twitter account.

Congratulations to North Macedonia for joining NATO, a well deserved step. Now, I look forward to working closely with North Macedonia during accession negotiations to join the EU, as Member States gave green light this week to start accession talks. Its future belongs in the EU.

High Representative of the EU for Foreign Affairs and Security Policy Josep Borrell congratulated North Macedonia on becoming 30th NATO Ally and said that he is looking forward to working together on advancing EU-NATO cooperation.

“Welcome North Macedonia as 30th member of NATO! The accession increases security and stability in the entire region. This success was made possible by the courageous reforms of the government”, said Maas.

Greece, which was the first NATO country to ratify the accession protocol, congratulated North Macedonia on joining.

“We congratulate the Republic of North Macedonia that joins NATO as the 30th member of our Alliance. We welcome our neighbours to the NATO family & look forward to working together as allies”, posted official account of the Greek Ministry of Foreign Affairs.

“Today, I am pleased to congratulate North Macedonia on becoming the 30th NATO Ally. North Macedonia’s commitment to transatlantic security & to common values will make NATO stronger & will serve as an example of success for our Alliance’s open-door policy,” wrote Hutchison on Twitter.

“North Macedonia has officially become a member of NATO. I, therefore, congratulate my colleague Dimitrov Nikola. Slovenia is proud to have served as the final NATO Contact Point Embassy in Skopje”, said Slovenian Minister of Foreign Affairs Anže Logar on behalf of the Slovenian Government.

Foreign Minister of Iceland, Gudlaugur Thór Thórdarson congratulated to Nikola Dimitrov on his Twitter account and wrote that he looks forward to future cooperation.

MEP Tanja Fajon, head of the Slovenian delegation within the political group of Progressive Alliance of Socialists and Democrats,  also congratulated North Macedonia.

“Congratulations to North Macedonia for joining NATO today! Well deserved! You have all the reasons to be proud and celebrate! One hell of a week for you with the green light to open the accession talks with the EU, too”, wrote Fajon.

“Sincerely congratulate President Pendarovski also and people of North Macedonia with historic achievement – accession to NATO as 30th member. Alliance keeps its promise of implementing the open door policy. I Believe that one day Ukraine will become the full-fledged NATO member too”, wrote Zelensky.