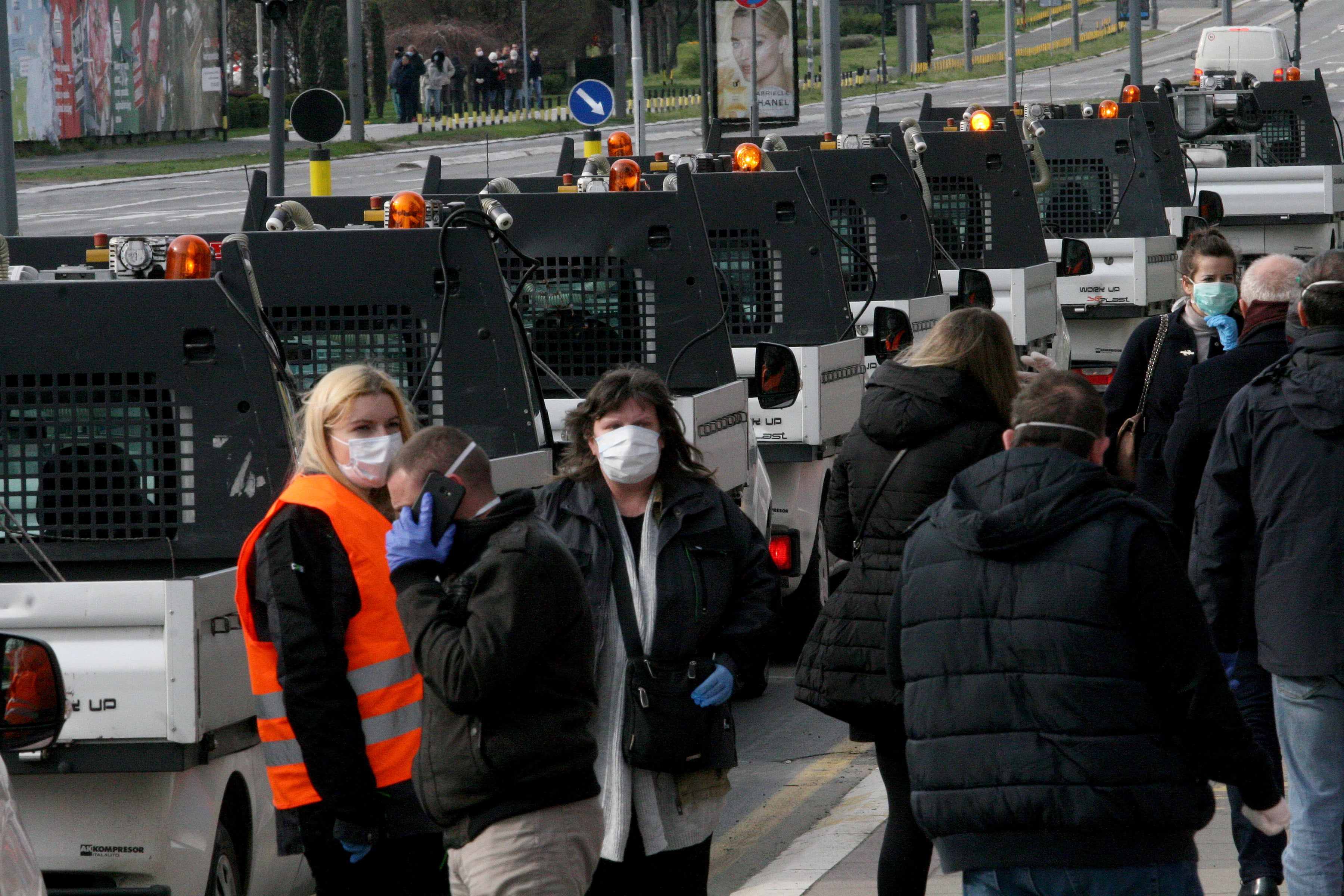 Belgrade at the time of pandemic; Photo: Tanjug / Tara Radovanović

In order to contain the spread of the coronavirus (COVID-19) and lower the burden on healthcare systems, governments of the Western Balkans have imposed restrictive measures, including the declaration of the state of emergency in Serbia, North Macedonia and in the entity of Bosnia and Herzegovina, Republika Srpska.

COVID-19 is, without a doubt, a threat to human lives, so protecting people should be the utmost priority of the governments. Unfortunately, it also may pose a significant threat to the rule of law – the basic principle of the liberal democracy and the valuable cornerstone of fighting against pandemic.

Numerous restrictions and fast-track procedures which aim to provide the efficient answer of the system to the crisis, and suspension of the checks-and-balances principle, leaves major space for corruption.

Corruption, in these challenging times, has a very malign influence because it can diverge the necessary resources to the private pockets, leaving the most vulnerable people without proper health care and protection. This was the case with the Ebola crisis in Western Africa, where Red Cross estimated that 6$ millions were lost on the to “fake customs bills, overbilled supplies, and payments to non-existent workers”.

Such kind of development is especially dangerous in poor countries, where healthcare resources are scarce in terms of medical staff, equipment, medicines, and where the rule of law is at a low level even in the times of relative stability.

The regulations in Western Balkans’ political communities often do not give precise definitions when it comes to the emergency measures, so respecting the spirit of the rule of law depends a lot on the decision makers’ “sense for democracy”, which is something that cannot be entirely relied upon.

Although the emergency situations require leadership and swiftness of action, which often means overruling some of the usual checks-and-balances procedures of democratic deliberation and market economy, COVID-19 emergency situation has invoked the ghosts of authoritarian tendencies and fear of further backsliding of reforms, says Ruslan Stefanov, Director of the Economic Program of Centre for Study of Democracy (CSD) from Sofia.

„These tendencies have received international backing, with Russia and China actively trying to convince scared local constituencies that their only hope are the strong men from the East and that EU’s democracy and solidarity cannot deliver“, Stefanov explains.

He also warns that the authoritarian side of the medal is corrupted, incompetent, and lacks capacity to deliver, which would form the worst bottle-necks that countries in the Balkans will face during and after the crisis.

“There will be corruption and abuse of power and resources, which will cost human lives. Just like the corrupt focus on grand infrastructure and energy projects over the past decade in the region has drained valuable resources away from healthcare”, he points out, adding that conspicuous government spending projects look particularly cynical now when front-line health workers and critical patients scramble for basic protective gear.

The exceptions from the general rules pose greatest corruption risks

For Nemanja Nenadić, Program Director of Transparency Serbia, new risks of petty and large corruption are brought by any prohibition, restriction or licensing regime.

“Several cases of petty corruption have already been disclosed, such as the case when a police officer was bribed not to report a violation of isolation rules”, he pointed out.

„In principle, such risks are the greatest when there is a general rule set with the possibility of exceptions upon obtaining specific consent“, Nenadić says, adding that special attention should be paid to the implementation of these rules.

He also points out that the greatest corruption potential will emerge from the measures that are yet to come, probably to a greater extent after the crisis.

„It is obvious that certain categories of economy and population will seek for the state support in order to recover from the damage caused by the epidemic. Since there won’t be money for everyone, nor a completely objective criteria for determining who should be helped, this will open a large field for trade in influence and corruption“, Nenadić concluded.

Also, as the state of emergency was declared in Serbia, by the Presidents of Government, National Assembly and Republic because the National Assembly could not gather due to the restriction of gathering imposed earlier by the Government, Nenadić thinks that if this decision is challenged later on, then the state would face huge claims for damage compensation.

„Therefore, it is necessary to find a modality for National Assembly to approve the measures stemming from the state of emergency, at least subsequently “, he says.

The control mechanisms will move from prevention to audit

There are known power abuse and corruption risks that could be observed from the past cases in North Macedonia and other countries, said Misha Popovikj, Good Governance Program Coordinator at Democracy Societas Civilis Skopje (IDSCS).

“We had a case of abuse of public funds during one of the previous crisis. In this so-called “Batchilo” case, the authorities reimbursed a sheepherder without enough evidence of damage during a military operation during the conflict in 2001“, explained Popovikj.

He said that on one hand, there are known risks and past experiences and on the other hand there is an obvious need for fast action by the authorities in handling this pandemic.

„The result is that in these circumstances, control against corruption mechanisms will mostly move from prevention to audit“, Popovikj pointed out and added that this boils down to the existing integrity of institutions and anti-corruption mechanisms embedded in the institutions which are usable in this situation, with the personal integrity being “a wild card” that can improve situation.

“The institutions should focus on transparency, but at the same time, internal auditors should increase their work and help institutions adapt anti-corruption procedures to the new circumstances“, Popovikj concluded.

According to the Transparency International, the procurement of medicines and supplies in health systems is one of the most vulnerable areas for corruption in the time of emergency. This concern is also present in the European Union where 28% of health corruption cases are related specifically to procurement of medical equipment.

The governments in the region, as well as those in Europe, that are mostly hit by the crisis, are lacking medical equipment such as medical ventilators, which are vital for the patients on the intensive care.

In Serbia, information coming from the top public officials about the number and procurement of medical ventilators, is going from secrecy to contradictory information from the very beginning of the crisis.

Nenadić says that authorities are confusing the public about these procurements, because they are making a mystery out of it.

“No one would dispute the necessity to acquire this scarce medical equipment in the times of crisis like this”, Nenadić said.

As an example of the created “mystery”, he pointed out the statement of the President Vučić who said: “We have paid in advance for additional medical ventilators – not on the black, but on the grey market, and I won’t say where from even if you shot me afterwards” and explained that if the procurements are conducted to provide for basic living conditions, then it should be purchased from the one who has such goods, so it is difficult to imagine what a “grey market” purchase would be.

“It might even be justified to temporarily establish the confidentiality of the contractor’s identity, if that was condition of the sale, but then it should be said that one of the procurement procedures that is available in our legal system has been applied, and not to create public perception that the Government is doing something illegal and brag about it”, he pointed out.

Nenadić explains that current Serbian Law on Public Procurement, which be applicable until July 2020, provides a possibility to perform public procurement “in order to provide basic living conditions in the events of natural disasters” without applying any of the procedures, but with the respect of the principles of the law which are efficiency, competitiveness, transparency, equality of tenderers.

“However, adherence to these principles is a matter that can only be determined afterwards, and there are no firm procedural guarantees for them”, he said and explained that another public procurement option is to conduct negotiation procedure due to the urgency.

“Negotiation procure has deadlines that are significantly shorter, compared to the regular tender procedure, but there are also guarantees of transparency – by publishing information on the Public Procurement Portal. An example is the procurement of 15 medical ventilators just before a state of emergency was declared”, he said.

He concluded that when it comes to the procurement as well as other areas related to the epidemic, it would be good to hear from the professionals and medical institutions what type and quality of the goods we need, what we have procured and how much we have payed and what we still lack.

“This would be the right path of building trust and cooperation with citizens, which is now more than ever needed in the fight against pandemic”, he says.

What civil society actors should do?

Our interlocutors agree that civil society and media needs to stay active watchdog of the anti-corruption policies, trough investigative journalism, preparing reports on potential abuse, monitoring the state aid provision, providing solutions for dealing with the crisis and blowing into “whistle” whenever it’s needed.

“In such testing times, CSOs, need to stand up for accountability and oversight over government action, as well as employ their European networks to provide viable measures for dealing with the crisis“, said Stefanov.

He explained that anticorruption CSOs need to engage constructively in order to track and collect on information on spending and potential abuse, preparing their reporting for after the crisis and blowing the whistle on any cases of particular concern.

„Also, they need to tap into their global networks and provide constructive proposals for how to best deliver the emergency services, translating and spreading reliable information on how other countries ensure democratic standards are upheld and protect taxpayers’ money “, Stefanov concluded.

The good example in the region so far is provided by Institut Alternativa from Podgorica, which called upon the Government of Montenegro to be transparent in the spending of the COVID-19 emergency donations, to limit irrational and discretional spending and introduce tighter control of the spending in the public enterprises.

In North Macedonia, according to Popovikj, it looks like the institutions are handling the situation with a reasonable level of transparency and local investigative journalists are uncovering possible abuses by private companies in providing diagnostics for coronavirus.

“Civil society must also look into the expedited procurements, meaning those with the short deadlines or with direct negotiation under urgent circumstances. This is because corruption can hide behind transparency, meaning that not just the transparency of the contract and the call should be checked, but also whether some contractors are notified in advance to submit the offer or have the contractors delivered goods by a certain date”, Popovikj concluded.

Postponing the elections – a chance for dialogue between the ruling and opposition parties?

France 🇫🇷 is a strong supporter of the #EU 🇪🇺 integrations of the WB, but the region is not convinced that it will… https://t.co/azvnSrEtM5

Reply Retweet Favorite
The @EU_Commission has said that by the end of its current mandate, one country could end negotiations and that… https://t.co/4Q2KAMvR30

Reply Retweet Favorite
[OPINION] The February parliamentary election results in #Kosovo, for the 2nd time, brought victory to the… https://t.co/1haLWnAYla