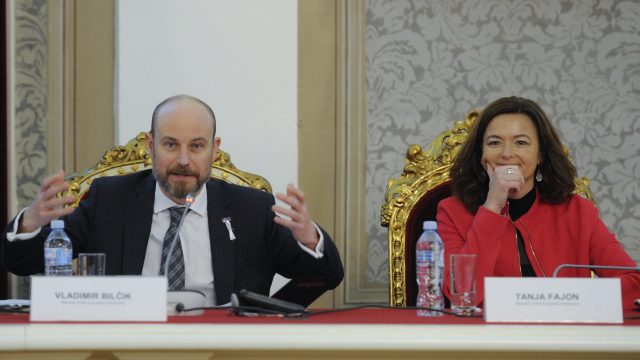 BRUSSELS – Chair of the EP Delegation for Serbia Tanja Fajon called the authorities of the Western Balkans to ensure the work of parliaments in overseeing the measures to fight COVID-19.

“I call on the authorities of the Western Balkan countries to ensure the constitutional role of parliaments in overseeing the measures undertaken to fight the spread and impact of COVID-19. Suspension of democracy is not an option in these difficult times”, Fajon wrote on Twitter, tagging EP Rapporteur for Serbia Vladimir Bilčik.

In his reaction to Fajon’s tweet, Bilčik wrote that, as European Parliament prepares for this week’s remote plenary session, it follows developments in Western Balkans very closely.

“In these unprecedented times of crisis, it is essential that parliaments in accession countries continue to play their constitutional roles”, Bilčik wrote on Twitter.

He added that parliaments have to oversee the measures taken to fight the spread and impact of COVID-19 , they represent the voice of the citizens.

“Democracy cannot be a victim of the pandemic”, Bilčik concluded.

Since the outbreak of the virus in the region at the beginning of March, parliaments of Albania, Bosnia and Herzegovina and Kosovo continued with their activities, the latter even voting to topple the incumbent government. Meanwhile, in Montenegro, College of Presidents, consisting of the Speaker and leaders of the party groups, continues to meet.

Parliaments of Serbia and North Macedonia, which were previously dissolved due to the calling of elections, now postponed, were not called back into session even after their countries announced the state of emergency.

In Serbia, Speaker of Parliament Maja Gojković justified this decision with the epidemiological situation and Government’s recommendation that no large gathering should be held. According to the Constitution of Serbia, the National Assembly should confirm the state of emergency as soon as it is capable to meet.

In each if the EU27 countries parliaments participated in introducing emergency measures to fight COVID-19.