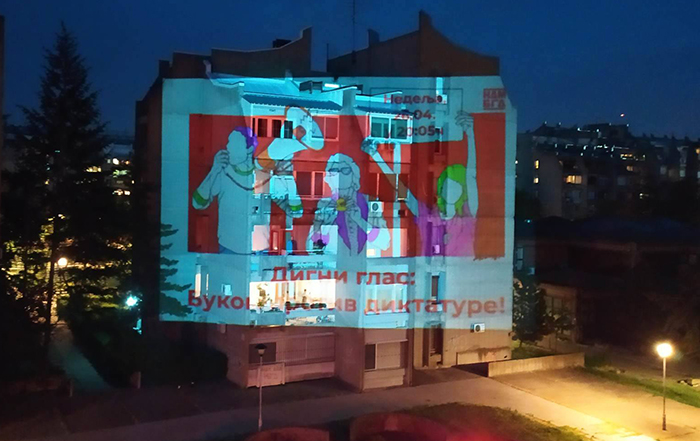 Invitation to the protests in Belgrade; Photo: Ne davimo Beograd

For the fourth night in a row, citizens of Serbia protested against the Government by blowing whistles, banging on pots and playing music from their homes across the country at five minutes after eight o’clock, during the curfew. The noise-making was initiated by the “Ne davimo Beograd” movement, and soon endorsed by most of other opposition parties. It does not appear, however, that the majority of citizens protesting are supporters of any opposition party.

“Citizens are fighting against the abduction of the state by the Serbian Progressive Party, against the destruction of institutions and the centralization of power in the hands of the criminal elite, with the consequences of people close to the government gaining big fortunes, and increasingly difficult living and working conditions for the vast majority of our citizens”, stated in a announcement by Ne davimo Beograd movement, calling to join them and invite friends to take part in the action “Raise Your Voice Every Day: Noise Against Dictatorship”.

The protests were triggered by the announcement of the Government that the curfew during the weekend of 1 May will last from Thursday at 18 afternoon to Monday at 5 in the morning, 83 hours in total. Serbia has already undergone three weekends of total curfew in April, including the Orthodox Easter weekend, making it one of the European countries with harshest pandemic measures, despite not being hit as seriously as other parts of the continent (as of today, there are 173 reported deaths). It is assumed that the dissatisfaction of the citizens has reached a tipping point this week.

However, the President Aleksandar Vučić is claiming that the protest is due to the measures and curfew introduced during the state of emergency because of the pandemic, even though the Ne davimo Beograd movement stated reasons other than the measures in its announcement of the protest.

The number of citizens protesting cannot be estimated, but the it seems to be on the rise. Every night since Sunday, videos of the people protesting have been surfacing on social media, primarily from the biggest cities.

In response, members of the ruling Serbian Progressive Party invited their supporters to make the noise of their own today in support of the Government, starting at 20.30. According to social media posts, the turnout was much lower than during the 20.05 protest.

In Novi Sad, the second largest city, the ruling party members have installed several loudspeakers on the streets, which played the chanting of football fans “Hey, hey, Đilas, return the money you thief”, referring to the opposition leader Dragan Đilas, president of the Freedom and Justice Party. The chanting lasted approximately ten minutes.

Meanwhile, in Belgrade, a video surfaces of the ruling party supporters lighting torches and chanting “Đilas, thief” on the roofs of the buildings.

During today’s protests, Radio-Television of Serbia daily news section, the most watched informative programme in the country, presented the news from culture and sports. It did report on the protests across Serbia. According to President Aleksandar Vučić, who appeared on the national public broadcaster ten minutes after the protests, the measures are going to be relaxed, and the citizens will be allowed to leave their homes on Saturday and Sunday from 5 am to 18 pm.

Speaking in a special appearance on the Radio-Television of Serbia, President Vučić stressed that the measures have been necessary.

“Nobody is a sadist, nobody wanted to torture people, we just wanted to save the country and our parents”, Vučić said.

EU announces €3.3 billion in support for the Western Balkans

Kukan: Albania to get recommendation for opening EU accession negotiations