Institutional response of BiH authorities to COVID-19 treat, enforced under the state of emergency declarations, brings challenges for BiH fragile democracy. Generally positive citizens perception of government(s) efforts is occasionally staggered with publicly stated concerns and incidents revealing flaws in the organization and implementation of emergency policies. Some of them are moving in the direction of exceeding constitutional democratic and human rights guarantees which are not supposed to be subject of derogation in any circumstances.

In general, crisis management of pandemic in BiH is organized in line with Constitution. Declared state of emergency on all administrative levels activated quite dynamic normative activity with numerous decrees, instructions, decisions, orders and other acts issued on a daily basis by the executive authorities. Some measures provoked quite intense public debates related to violation of human rights as they have specific position in the Constitution of Bosnia and Herzegovina.

For example, objections are raised weather differences between measures in FBiH (no curfew, no quarantine) and RS (curfew, quarantine) will put in jeopardize the coherence of overall pandemic response in the country and, indirectly, right to life of BiH citizens. Not to mention that different treatment of citizens based on their entity of residence will obviously initiate the issue of discriminatory behavior.

In relation to above mentioned, on April 22, the Constitutional Court concluded that ordering prohibition of movement of the persons less than 18 years of age and over age 65 on the territory of the Federation of Bosnia and Herzegovina is violation of the right to freedom of movement under Article II(3)(m) of the Constitution of Bosnia and Herzegovina and Article 2 of Protocol No. 4 to the European Convention for the Protection of Human Rights and Fundamental Freedoms. On March 24, Personal Data Protection Agency in BiH delivered a decision to ban public disclosure of personal data of COVID-19 patients and persons respecting the measure of isolation and self-isolation. Agency reacted to inquiries of citizens who reported about cantonal and local authorities making publicly available lists with the personal data of COVID-19 patients and persons declared the measure of isolation and self-isolation.

Having in mind above mentioned, the general expectation is that media, civil society and political opposition are supposed to be in the front line of effort to safeguard institutions of democracy, rule of law and human rights. Still, many opposition political parties in BiH decided to take the role of silent observer of ongoing pandemic crisis in the country. Their officials are not present in the media, they are not issuing any relevant statements and it appears that they decided to put themselves in a kind of a „political self-isolation“.

On the other side, few opposition political parties opted for more active role and engaged themselves in public activities such as periodical press statements criticizing crisis management authorities and ruling political parties for misuse of crisis context for promoting their narrow and particular political interests. In addition, they are presenting their own ideas of measures to combat the spread of the disease, as well as measures to deal with the anticipated economic failure. Often, these measures lack expert analysis and clear details of their implementation.

However, opposition role is critical in attempts to ensure legislative control over executive government. Declarations of state of emergency and measures of confinement further diminished the capacity of parliaments to control executive action. Opposition maintain pressure for organization of legislative and representative bodies’ sessions, instead of on-line sessions, needed for having real public debate over variety of state of emergency policies. Active opposition contributes in raising issues that catches the attention of citizens such as curfew measures, effectiveness of introduced health protocols, crisis management authorities approach to quantity of testing, public procurement, etc.

Unfortunately, the state of emergency didn’t significantly changed pattern of behavior in relations between government and opposition. Public calls of various political leaders and officials to overcome political disagreements and unite in the joint effort to combat disease are only of declarative nature and sporadic. On the other hand, governments are accusing opposition for continuing and inappropriate politization of crisis management issues, while opposition continues to undermine capacities of ruling political parties and their governments to deal competently with the crisis, blaming them for misusing the crisis for promoting and protecting their narrow political interests and interests of their clientelistic networks.

Some of them were able to reorganize their resources and establish services aimed at crisis management monitoring, publicly reacting to any substantial violations of democratic practices, human rights and disinformation.Majority of smaller, locally oriented NGOs either limited or stopped their activities, or decided to engage their resources and activism in local humanitarian activities and solidarity initiatives.

Media outlets, especially those with editorial policies open to informants outside the government sector, are exposed to governments criticism due to understanding that criticism toward crisis management structures, questioning measures and quality of their implementation are contributing to public unrest and panic. Crisis management authorities organize daily press conferences, some of them without the physical presence of journalists, providing information on outbreak severity and introduced measures.

In addition, ad hoc press conferences are organized if there are any emergency updates or new measures are being introduced. However, the established system of crisis communication can be regarded as one-way communication where authorities decide about quantity and content of shared information. At the same time, questions, articulated by media, NGOs or experts community, which are result of increased public interest for some aspects of the pandemic crisis usually remain without clear answer, or without answer at all.

Days to come will reveal whether behavior of authorities will further deteriorate democratic context of the country, or reflect public demand and introduce more open and transparent crisis management.

EU announces €3.3 billion in support for the Western Balkans

Key findings of the 2021 European Commission Report on Montenegro 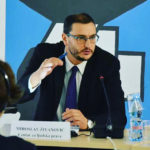 Miroslav Živanović currently works for the University of Sarajevo – Human Rights Centre, being responsible for its programmes and projects in the field of human rights education, reporting and research.