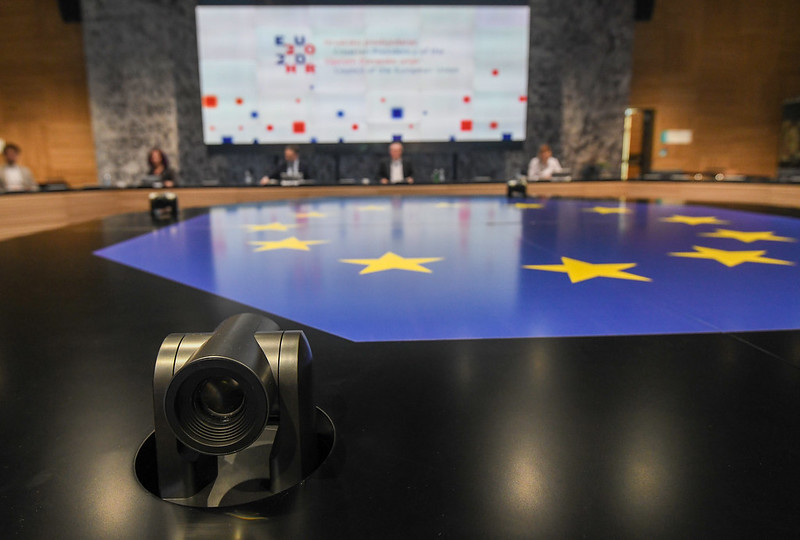 20:36 Zagreb Declaration has been released to the public. It reaffirms unequivocal support for the European perspective of the Western Balkans.

20:30 Asked about the fact that Serbia and Montenegro have been downgraded in the category of hybrid regimes by the Freedom House today, President Michel said that the importance of the rule of law and EU values has been reiterated at today’s Summit, while President von der Leyen added that they are conditions sine qua non for the EU accession.

20:18 During the press conference, Prime Minister of Croatia Andrej Plenković highlighted the successes of his country’s Presidency.

He added that Bosnia and Herzegovina, in Croatia’s view, deserves the status of the candidate country.

20:12 “Once we put behind us this immediate phase of the pandemic, EU will present the investment plan later this year – it will focus on necessary transport and energy infrastructure, but also Green new deal and digitalisation”, stated President of the European Commission Ursula von der Leyen during the press conference. She added that free press, which is the cornerstone of the democracy, is of particular importance when it comes to EU values.

20:05 “We have reaffirmed and reconfirmed the position of the European perspective for the Western Balkans. It is important to continue the reforms, the rule of law, the democratic values, the fight against corruption – they are essential”, said the President of the European Council Charles Michel during the press conference following the leaders meeting.

19:55 During the leaders meeting, Prime Minister of Spain Pedro Sánchez welcomed the appointment of the Special Representative of the European Union for the Belgrade-Pristina Dialogue, and encouraged both parties to make progress aimed at achieving a consensual and lasting solution.

18:52 Chairman of the Governing Board of the Belgrade-based European Policy Centre Srđan Majstorović assessed that the fact that the Summit is taking place at all is a success. Nonetheless, he added the accession process is becoming exhausting due to the EU’s internal problems and lack of results of the candidates, N1 reports.

18:40 In his speech at the video conference, President of Kosovo Hashim Thaçi reiterated the urgent need for the EU to deliver on visa liberalization and candidate status for his country, as the only way to rebuild trust and confidence in the EU integration process

Very constructive conversation w/ @eucopresident ahead of today’s #ZagrebSummit. Agreed that mutual engagement b/w #WB & #EU to ensure a credible integration process for the region is critical. Emphasized that EU member states must take the overdue decision on visa liberalization

18:34 Following his remarks at the Summit, President of Montenegro Milo Đukanović tweeted that Europe should do its best to make the world after corona a better world and to ensure that it can preserve the values of Western democracy, liberal society, freedoms and human rights, as well as market economy, and effective functions of the states.

(2/2) #Balkans must not be left to third parties, for it is a living European tissue. #ZagrebSummit #EU🇪🇺 #WesternBalkans

18:24 In an opinion piece released earlier today on the occasion of the Summit, Director of Istituto Affari Internazionali Nathalie Tocci wrote that the EU’s commitment to the Western Balkans must not be propelled by the fear that the region will otherwise fall into China’s lap. Read more from the piece here.

18:09 President of the European Parliament David Sassoli released extracts from his speech at the Summit, in which he said that there can be no justification for suspending rights or denying parliaments their prerogatives even in the times of extraordinary measures taken to contain the virus.

Sassoli also stressed that the more political nature of the new enlargement methodology must not undermine the EU’s commitment to step-by-step accession on the basis of the individual merits of each candidate country.

17:24 EU is preparing a significant economic assistance package, which will follow the Reports on the Western Balkan countries’ progress, Croatian Government tweeted from the meeting that is currently ongoing.

16:40 Minister of Foreign Affairs of North Macedonia Nikola Dimitrov, in an interview for N1, thanked Croatia for the progress his country has made during its Presidency, adding that it would be better to have the word “enlargement” in the Declaration, though he prefers the phrase “completion”.

He also said that North Macedonia expects the negotiating framework to be drafted by the Commission by the beginning of June.

16:22 PES and S&D high-level meeting concludes with a statement from Tonino Picula.

“EU enlargement still maters! It gives the EU the opportunity to support important reforms in candidate countries, while taking a leading role in the region to promote peace, democracy, fairness and prosperity”, Picula said.

15:04 President of the European Council Charles Michel talked with the Presidents of Kosovo Hashim Thaçi, Serbia Aleksandar Vučić and Montenegro Milo Đukanović in the context of today’s Summit.

“We are united in the fight against COVID-19 and we stand in solidarity with the Western Balkans, our closest partners, geographically, historically, culturally and economically. When we face challenges together, we overcome them together”, EPP stated.

14:20 During the Party of European Socialist’s and S&D high-level meeting, High Representative of the Union Josep Borrell stresses that the enlargement is a policy of the common interest and that this work is worth doing.

MEP Kati Piri, Vice President of the S&D group on Foreign Affairs, says that today’s Summit must be the start of a renewed commitment of the EU towards the Western Balkans.

14:10 In the context of today’s Summit, Secretary General of the Regional Cooperation Council Majlinda Bregu announced the launch of the new vision of the Regional Economic Area, which will entail deepened economic integration, connectivity, digital innovations and intraregional trade.

12:49 Minister of Foreign Affairs of Croatia Goran Grlić Radman stated for N1 that this Summit is the legacy of Croatian Council Presidency. According to him, the proposed Declaration could have been more strongly phrased, but it reflects the realistic state of affairs and that it is a great success of Croatian Presidency.

12:34 European People’s Party holds its own Summit ahead of today’s meeting. President of EPP Donald Tusk, Vice Presidents Johannes Hahn and Donald Tusk, President of European Commission Ursula von der Leyen, Prime Ministers of Slovenia and Croatia, as well as President of Serbia Aleksandar Vučić are taking part, among others.

Earlier today, MEP Kinga Gál (EPP) stated that EU leaders will also confirm the plan to start EU membership talks today. “It is very important to reinforce the prospect of EU enlargement for these countries. The decision to open accession negotiations with Albania and North Macedonia is a step in the right direction”, stressed Gál.

12:02 MEP Tonino Picula (S&D) who served as the Rapporteur for the Recommendations on the Western Balkans ahead of the Summit, said for N1 that the event is a welcome one, but that it will not make enlargement a mainstream European policy. He expressed his dissatisfaction that the draft declaration does not mention the green light for Skopje and Tirana which was given in March, nor the words enlargement, membership or integration. He assessed that the enlargement policy is limited by the relations between the Member States.

11:05 President of Kosovo Hashim Thaçi had a phone conversation with Croatian PM Plenković, thanking him for making the Summit happen in such unprecedented time. “Optimistic to see that the WB6 is high up on the EU agenda during Croatian Presidency”, Thaçi tweeted.

10:45 Commenting on the Declaration to be adopted later today, Prime Minister of Croatia Andrej Plenković said: “We made a very solid document given the circumstances. The fact that the meeting is happening is already a strong political signal”.

Croatia is holding its first Presidency of the Council of the European Union. EU-Western Balkans Summit in Zagreb has been one of the highlights of its programme; due to the COVID-19 pandemic, it is taking place as a video conference instead.

10:25 Commissioner for Neighbourhood and Enlargement  Olivér Várhelyi writes for European Western Balkans: “Given its European perspective, the EU is treating the Western Balkans as privileged partners by granting them access to many initiatives and instruments for the Member State… We will support the region’s economic recovery that will at the same time bring the partners closer to the EU.”