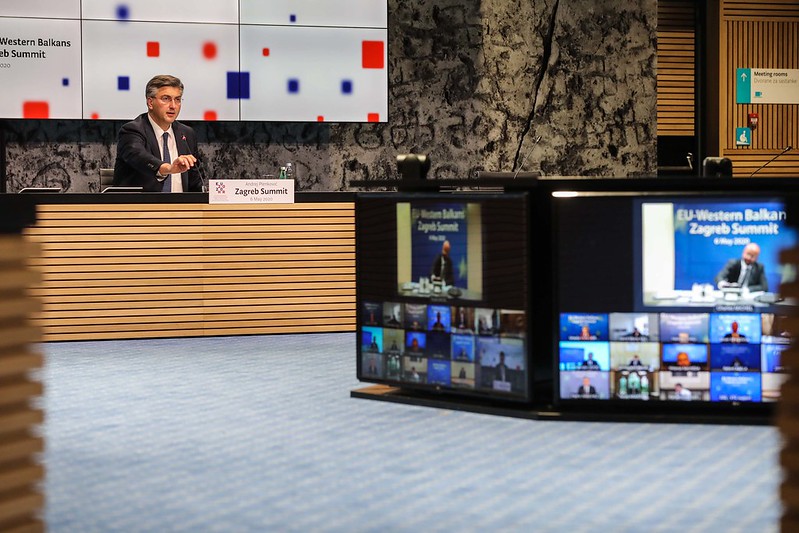 SKOPJE – While the EU-Western Balkans Summit and the Zagreb Declaration rightly focused on the ongoing Coronavirus crisis, stronger commitment to enlargement and political steering, as well as pledges set out in the new enlargement methodology and Credible Enlargement Strategy were missing, Institute for Democracy Societas Civilis from Skopje (IDSCS) states in its reaction to the outcome of the Summit.

“It comes at no surprise that the Summit Declaration puts emphasize on the current context of the global pandemic to “reiterate our [the EU’s] strong solidarity with our partners in the context of the coronavirus crisis”. Against this backdrop, EU leaders have signalled the shared destiny with the Western Balkans by integrating the six states in its crisis response mechanism, among others by issuing a package of over EUR 3.3 billion to the benefit of the Western Balkans in its fight against Covid-19 and its implications for societies and economies”, the statement reads.

“In good times as in bad” – true to this motto, EU leaders aimed to express their pledge for the shared European future, the Institute assesses.

“However, considering previous EU-Western Balkans summits (Zagreb 2000, Thessalonica 2003, Sofia 2018), IDSCS expected that the language used in the 2020 Zagreb Declaration will follow the line of the stronger commitment picked up in the latest 2020 Commission Communication on the region’s integration efforts and enlargement perspectives”, the Institute stresses.

It reminds that the Declaration goes as far as EU’s ‘reaffirming its unequivocal support for the European perspective of the Western Balkans’.

“It is left to us to contemplate that the new methodology for accession negotiations, recently adopted and praised by all EU member states, in addition to positive decision from the Council on opening of accession negotiation with Albania and North Macedonia, is sufficient enough signal for our clear perspective”, the statement reads.

It is added that, despite IDSCS’ expectations, there is no reference or explanation of the pledge for regular Western Balkans Summits set out in the new enlargement methodology nor the 2025 framework envisioned in the 2018 Credible enlargement perspective, the 6 flagship initiatives (strengthened rule of law, enhanced support for socio-economic development, digital agenda, reinforced engagement in security and migration, increased connectivity, and support for reconciliation and good neighborly relations), and the follow-up Sofia Priority Agenda. Announcement for the next EU-WB summit in two years’ time, as in the case with the 2018 Sofia Declaration, or in line with the new methodology (regular EU-Western Balkans Summits) is missing.

The Summit in Zagreb would have been an occasion on which member states will initiate the announced stronger political steering and high-level engagement, the Institute reminded.

“To truly express candid commitment towards the Western Balkans European perspective, a follow-up to this and previous summits and promises is inevitable and must be connected to the general debate on the “Future of Europe”. In fact, the future of Europe conference, organised by the Vice-president for Democracy and Demography, Croatian Dubravka Šuica, will only be half-baked without future members participating in it!, the Institute concludes.

Varhelyi: No other region has access to so much financial mechanisms as the WB