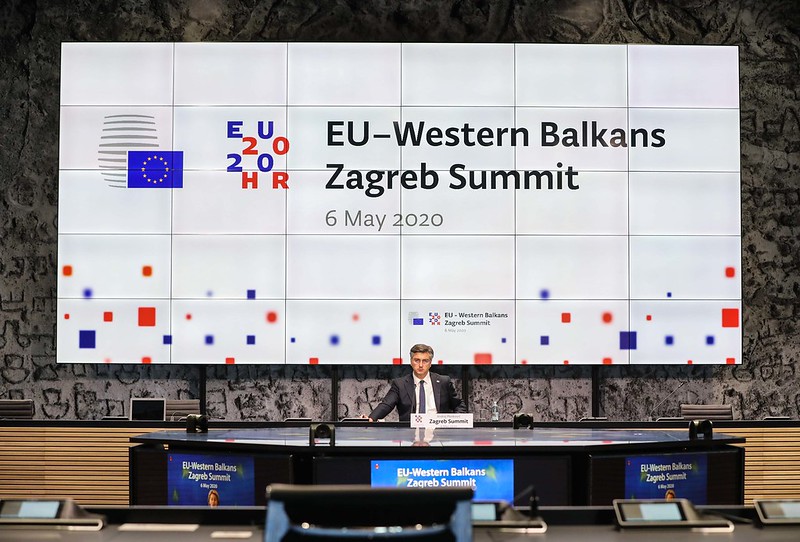 On the morning of the video conference between the leaders of the EU and the Western Balkans on 6 May, President of the European Council Charles Michel tweeted that the event will focus on three topics: joint tackling of the COVID-19 pandemic, reaffirming the European perspective of the region and reiterating commitment to EU values and reforms. The day after, our interlocutors believe that the second and the third area needed a more energetic tackling, but that there are still several positive outcomes of the Summit.

The Summit was announced as early as 2018, following a similar event in Sofia, when the Prime Minister of Croatia Andrej Plenković scheduled another meeting between the leaders of the EU and the Western Balkans in Zagreb during his country’s EU Presidency. Coronavirus pandemic prevented a physical meeting in Croatia’s capital, but it took place nonetheless. This fact in and of itself, analysts believe, should not be taken for granted.

“The real achievement of this summit was that it was held at all. Considering the circumstances, this was not a foregone conclusion. EU countries had to pledge, at least nominally, their support for the region’s EU perspective, at a time in which everybody’s thoughts would otherwise be focused elsewhere”, says Tena Prelec, Research Fellow at the Department of Politics and International Relations, University of Oxford, for our portal.

She also remarks that this time – unlike what happened in Sofia in 2018, when Spain withdrew its participation due to the presence of Kosovo officials – all EU member states decided to take part. Spanish Prime Minister Pedro Sánchez even welcomed the appointment of the Special Representative of the European Union for the Belgrade-Pristina Dialogue, and encouraged both parties to make progress aimed at achieving a consensual and lasting solution.

Milena Lazarević, Programme Director of the European Policy Centre from Belgrade, also emphasises that it should first of all be recognised that holding this meeting at all at the time when COVID-19 crisis is still very much ongoing in Europe sends an important message of support to the region and its progress towards the EU membership.

Even though this may seem like a low bar for a success of the Summit, according to our interlocutors, there were other achievements as well. Lazarević reminds that the Declaration adopted by the leaders at the end of the meeting officially invites the Commission to come forward with a robust economic and investment plan for the region, which is intended to boost its economies and competitiveness.

Srđan Cvijić, Senior Analyst at the Open Society European Policy Institute in Brussels, adds that EU’s decision to mobilise a financial package of over 3.3 billion Euros for the region’s fight with COVID-19 and its consequences once again confirms its commitment to the Western Balkans and the wellbeing of its citizens.

“It also exposes the cheap populism of some of the region’s leaders who intentionally belittled the role of the EU and overly praised the much lesser support of the third actors such as China”, he stresses.

One of the most controversial issues hanging over the Summit since its beginning, however, was the fact that the Declaration, the draft of which was released to the public in advance, only contains the vague phrase “European perspective” of the Western Balkans, and not a more clear endorsement of these countries’ membership.

The very first article of the Zagreb Declaration “reaffirms EU’s unequivocal support for the European perspective of the Western Balkans”. What the journalists were interested to know during the course of the Summit was whether the support to the eventual accession of the Western Balkans to the EU could have been expressed more strongly – an assessment endorsed by the Croatian Minister of Foreign Affairs Goran Grlić Radman, as well as MEP Tonino Picula. Srđan Cvijić shares their opinion.

“Whereas many will develop immunity from the Coronavirus, I am sorry to see that some of the EU’s leaders are not resistant to another kind of “virus” – that of enlargement skepticism. The Declaration following the Summit continues to use a euphemism “European perspective” when it should be talking about “EU membership”, “enlargement”, “EU accession” of the countries of the region”, he says.

“While it is fair to keep in mind that these documents are drafted in a very broad way to accommodate all EU member states, it is still underwhelming that a more direct expression, 17 years after Thessaloniki, could not be found. Ursula von der Leyen, of course, tried to correct this by stating repeatedly that the Western Balkans belong in the EU”, she points out.

Milena Lazarević, however, reminds that these words were also absent from the 2018 Sofia Declaration, and that the region has nevertheless seen significant boost of focus devoted to the enlargement policy by the EU, on the highest political level.

“During this period, a redefining of the enlargement methodology and opening of accession negotiations with two more countries – North Macedonia and Albania – took place. This tells us that the enlargement has been one of the main courses on EU’s menu recently”, she emphasises.

That the enlargement remains a politically sensitive issue was illustrated during the day by the French MEP from National Rally Dominique Bilde, who criticised President Macron for “confirming the EU membership for Albania”. The “unequivocal European perspective” is seemingly the compromise reached given these circumstances.

Another issue for which the EU has been criticised for compromising over is the state of the rule of law and respect for the democratic values in the candidate countries. Given the recent developments, a firm position of the EU had been expected, and it is questionable whether it was achieved.

“The discrepancy between the words of the Declaration or of the President of the European Council Charles Michel who rightly talks about “the rule of law, the democratic values, and fight against corruption” as key criteria for membership, and the catastrophic democratic backsliding in Serbia exacerbated by the pandemic should serve as an alarm bell”, says Srđan Cvijić.

The day of the Summit was also the day Freedom House has downgraded Serbia and Montenegro to the category of hybrid regimes for the first time since 2003. Asked about it during the press conference, President Michel said that the importance of the rule of law and EU values has been reiterated at the Summit, while President von der Leyen added that they are conditions sine qua non for the EU accession.

The Declaration, not surprisingly, is not very specific on these issues. It stated that the Western Balkans leaders should ensure that fundamental values, democratic principles and the rule of law are strictly upheld and implemented, including while special and extraordinary measures to contain the Coronavirus pandemic are in place.

President of the European Parliament David Sassoli was a little bit more specific in his address, claiming that there can be no justification for suspending rights or denying parliaments their prerogatives even in the times of extraordinary measures taken to contain the virus. He did not mention any country in particular, however.

In accordance with the new enlargement methodology, the Declaration also stresses that the EU assistance will be linked to tangible progress in the rule of law and in socio-economic reforms, as well as on the Western Balkans partners’ adherence to EU values, rules and standards, which may be a case for optimism. Tena Prelec also find it encouraging that the strengthening of the rule of law has been repeatedly highlighted as one of the most important issues to work on.

“This topic has always been present, but it is now noticeably more “front and centre” in the EU’s approach towards the Western Balkans. As the recently issued Freedom House Nations in Transit reports show, countries in the region cannot be classified as democracies, and not even as countries ‘in transition’. Serbia and Montenegro, the two frontrunners, both display extremely troubling forms of systemic abuse of power and impingement on freedoms. The good news is that, across the region, there are citizens who are standing up to these authoritarian tendencies and calling for European values”, she says.

EU, according to Prelec, should now think hard about who really needs support in the region – is it the autocrats, or the citizens voicing a cry for fairness, transparency and freedom from their windows, in reference to the “Noise against the dictatorship” protests that have been taking place in Serbia for the past two weeks during the curfew.

One of the most important conclusions of the Zagreb Declaration, of course, is that the EU is ready to reinvigorate the political dialogue and hold further meetings in the future.

“This means that there will certainly be new chances in the coming period for the EU to be encouraged to speak more openly about membership and enlargement if the leaders and governments of the region make progress in reforming and meeting all the aforementioned standards”, Milena Lazarević concludes.

“You have a perspective – if you can keep it”, might be the apt message of the 2020 Zagreb Summit.

Varhelyi: No other region has access to so much financial mechanisms as the WB

What is the state of the priority anti-corruption legislation in Bosnia and Herzegovina?