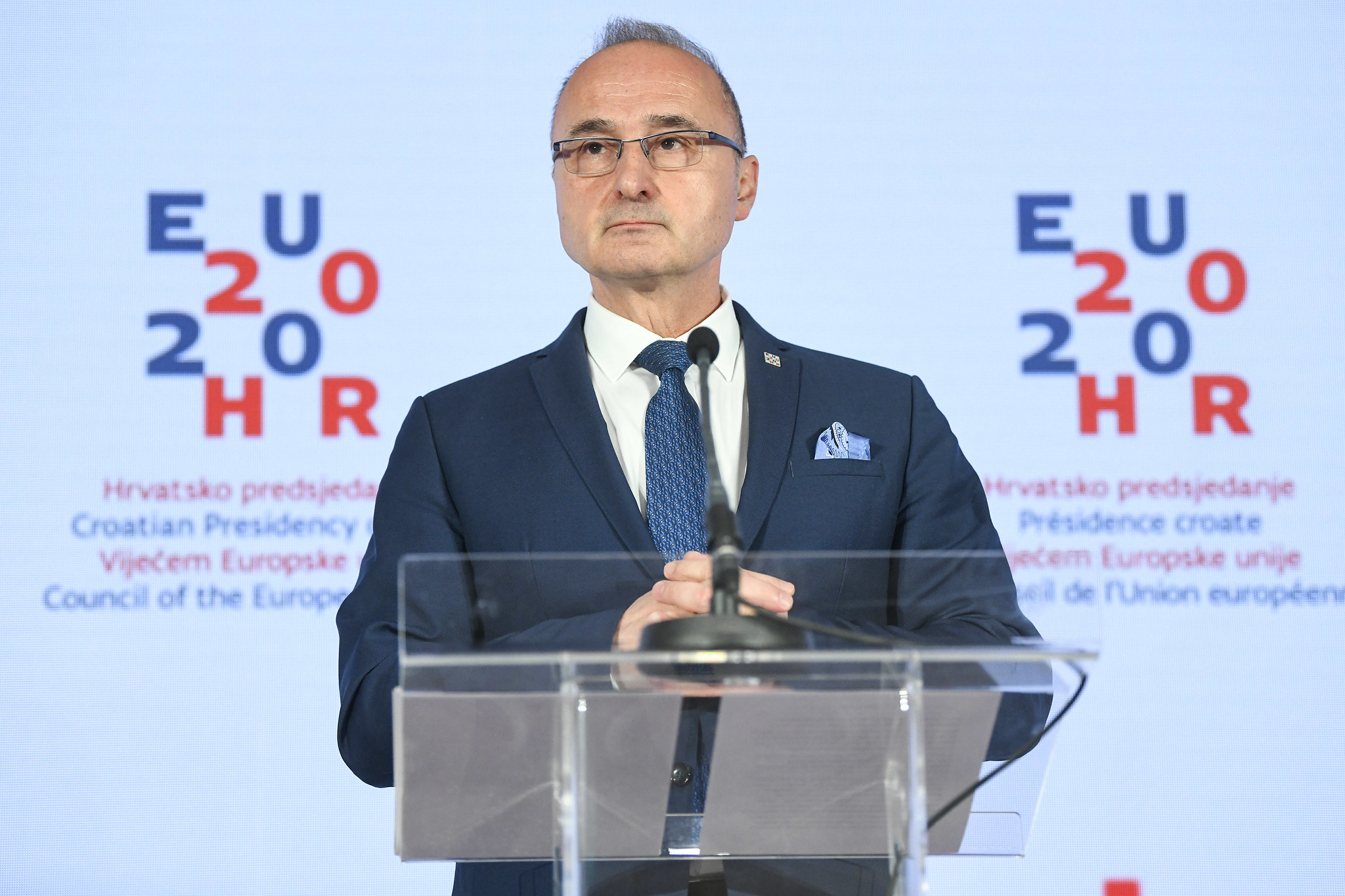 Even before the whole world heard of the Coronavirus, the first Croatian Presidency of the Council of the European Union had been regarded as challenging, with the withdrawal of the United Kingdom as one of the top priorities. Although the struggle against the pandemic has since become the top priority, the region of the Western Balkans saw several significant developments during the Croatian Presidency – green light for accession talks with Albania and North Macedonia, adoption of the new enlargement methodology and EU-Western Balkans Summit originally planned to be held in Zagreb, which took place virtually instead.

Minister of Foreign and European Affairs of the Republic of Croatia Goran Grlić Radman reflected on the enlargement and wider scope of the Croatian Presidency of the Council for our portal.

European Western Balkans: Are you satisfied with the outcomes of the EU-Western Balkans Summit? Given the circumstances, has this been the most that could have been achieved in terms of organization?

Goran Grlić Radman: We are very pleased with the EU-Western Balkans Summit in Zagreb and the high-level participation of leaders of all 27 Member States and all EU institutions, as well as representatives of financial institutions, together with the WB leaders.

We managed to do this in very difficult conditions, when all countries’ efforts are focused on fighting the COVID-19. The Zagreb Summit was the main event of our Presidency, and we like to say it was the crown of our six month leadership behind the EU wheel. It proves we have adapted very quickly to the circumstances by keeping our priorities high on the EU agenda.

The summit reaffirmed the EU’s unequivocal commitment to the region’s European perspective; confirmed solidarity and partnership in dealing with the COVID-19 pandemic; but also the region’s continued commitment to EU values and reforms. The EU and its leaders also showed their commitment to strengthening regional cooperation, reconciliation and good neighborly relations in the Western Balkans. The EU has demonstrated clearly how important this region is and that the EU is ready to support its efforts in finding solutions to existing problems that will contribute to stability, security and prosperity of the entire Western Balkans region. This is a success and we are proud of it.

EWB: Perhaps the most discussed issue during the day of the Summit was the fact that the Zagreb Declaration only used the term “European perspective” of the Western Balkans, and not stronger phrases such as “enlargement” or “accession”. How significant, in your view, is this wording of the Declaration?

GGR: Speaking of the Zagreb Declaration, the very first sentence states that the EU unequivocally supports the European perspective of the Western Balkans. And the Western Balkans partners reiterated their commitment to the European perspective as their firm strategic choice.  So, even though the word enlargement is not mentioned in the Declaration, this was in fact the enlargement summit, notably in light of a political decision taken in March to open accession talks with Albania and North Macedonia, and the fact that Montenegro and Serbia are already negotiating, while Bosnia and Herzegovina and Kosovo are potential candidates and would like to open entry talks in the future. The future of all the countries in the Western Balkans is in the EU and Croatia will continue to strongly support it. The main message sent from the summit is that the EU stands by the Western Balkans, that they have not been forgotten and that we are committed to the region. It also sent a strong message of unity, solidarity and support in times of crisis.

EWB: Unlike Sofia Summit in 2018, there was no indication on when the next high-level meeting might take place. The Declaration, as well as the new methodology, commits to a regular political dialogue – does this mean that the next Summit should be expected in 2021 or 2022?

GGR: We believe in the importance of regular EU-WB political dialogue at the highest level. So far, we had only four such meetings – the Zagreb Summit in 2000, the Thessaloniki Summit in 2003, the Sofia Summit in 2018 and the Zagreb Summit in 2020. We believe that such summits are necessary in order to keep the pace of the process and constantly send messages of encouragement and support. It is therefore important that, in the Zagreb Declaration, the EU leaders expressed their readiness to reinvigorate the political dialogue, including regularly at a high level, between the EU and the Western Balkans. Also, as you mentioned, the new methodology recommends creating new opportunities for high level political and policy dialogue, including through regular EU-Western Balkans summits. It will be up to the leaders to decide when the next EU-WB summit will take place. The proposal of our PM Plenković is to hold high-level EU-Western Balkans summits every two years.

EWB: The Declaration also states that the support the EU has provided to the region deserves public acknowledgement. Serbia has been notably slow to express gratitude for the EU assistance, while praising other countries, such as China. Is it correct to assess that this part of the Declaration is mostly aimed at Serbia?

GGR: The EU and the Western Balkans are together fighting the coronavirus and its effects. The EU actively supports the efforts to combat the coronavirus outbreak and its impact on societies and economies.

The Western Balkan partners, not only Serbia, got valuable support during the pandemic from the EU, for example – financial assistance; the EU has mobilized a package of over 3.3 billion euros for Western Balkans to support the health sector, support social and economic recovery and provide assistance through the European Investment Bank, as well as micro-financial assistance. Therefore, our commitment to provide assistance to Western Balkan countries is evident, and we believe that it is recognized in these states and by their leadership. What is crucial is that all six WB countries have clearly articulated their European orientation. As stated in the Declaration, the credibility of this commitment depends also on clear public communication and the implementation of the necessary reforms.

EWB: In your view, is the progress in the field of EU enlargement to the Western Balkans – opening of accession negotiations with North Macedonia and Albania, endorsement of the new methodology – the biggest achievement of Croatia’s Presidency of the Council? Do you expect this trend to continue when it comes to your country’s successors?

GGR: I am pleased that one of the priorities of the Croatian presidency has been fulfilled – the decision to open negotiations with North Macedonia and Albania. This decision is also the result of months-long intense political and diplomatic efforts by the Croatian Government, which has remained steadfast in order to achieve this objective, even after the European Council’s failure in October last year. Through preparations for the EU-Western Balkans Summit in Zagreb and active dialogue with the Member States and the European institutions, we have succeeded in bringing the issue of enlargement high on the EU agenda.

We believe that, after the Zagreb Summit 20 years ago, we have sent an important message with this year’s Summit. The summit and the concrete achievements in the enlargement policy, including the new methodology and the decision on opening accession talks with Albania and North Macedonia will remain a specific legacy of the Croatian Presidency. I am convinced that with these steps forward taken during our Presidency, there is again a new window of opportunity for enlargement.

EWB: The first Croatian Presidency was met with a challenge nobody had seen coming – the COVID-19 pandemic. How has this been reflected in the changes of priorities of Croatian Presidency? What do you think of the criticism of the EU over the lack of coordination and solidarity during the crisis – is it justified?

GGR: From the start of our Presidency, we have been dealing with complex and extremely important issues for the future of Europe: from ensuring orderly Brexit and reaching an EU-27 agreement on the mandate for negotiations on future relations with the UK, negotiations on the EU’s MMF and discussions about the Green Deal, to putting a strong emphasis on the enlargement policy and strengthening relations with EU neighbors – in geostrategic, security and economic terms. In the context of the challenges we are currently facing as a Union, especially after the outbreak of the pandemic, we believe that the Conference on the Future of Europe can serve as an important framework for reflection in shaping the vision of our common European future. It gives us a unique opportunity to bring the Union closer to its citizens, by reflecting upon and responding to their expectations and concerns.

Croatia’s presidency of the Council of the EU has demonstrated that it remains operative and capable of making important decisions in spite of the extraordinary circumstances due to the COVID-19 pandemic, which has had a profound effect on the way the EU works and communicates. That includes agreements being reached in a timely manner on a number of EU acts and guidelines that provide more flexibility in the use of EU funds, easier procurement and production of medical equipment, and free flow of goods across borders and through transport corridors. In addition, we have facilitated the repatriation of more than 625 000 European citizens from third countries.

The EU response to this crisis is comprehensive and strong. The aim is to protect jobs and entrepreneurship, ensure swift and effective recovery, achieve sustainable development and competitiveness of the European and national economies, while strengthening the solidarity and resilience of societies of all our Member States.

EWB: Recent criticism of the EU also concerns the situation in Hungary and Poland, where the situation with regards to respect to EU values has not improved, and apparently gotten even worse. Should have Croatia been more pro-active in addressing these issues as the country holding the Presidency?

GGR: The Croatian Presidency recognizes that the rule of law is a crucial element in protecting the common values in all our democracies. As such, it is a joint responsibility of the Member States and EU institutions.

In recent months no formal meetings could be held due to COVID-19, but the Presidency enabled a regular exchange of views by the ministers via informal video-conferences. With respect to rule of law, in April, the Croatian Presidency organised an informal videoconference of Ministers of Justice, which addressed the impact of the extraordinary measures on our justice systems. In April, we also had the informal video-conference of Ministers of European Affairs, where views on the horizontal aspects of responding to COVID-19 pandemic were exchanged. Another video-conference by European affairs ministers was held the other day, addressing a comprehensive response to COVID-19 crisis, including the impact and easing of emergency measures. Under a separate item, the ministers were informed, by the Commission, on the preparation of the first annual report on the rule of law in the Union, which will treat all Member States equally.

During these discussions, the need to preserve the respect for the EU values, the rule of law and fundamental rights were underscored – even in challenging circumstances we are facing now.