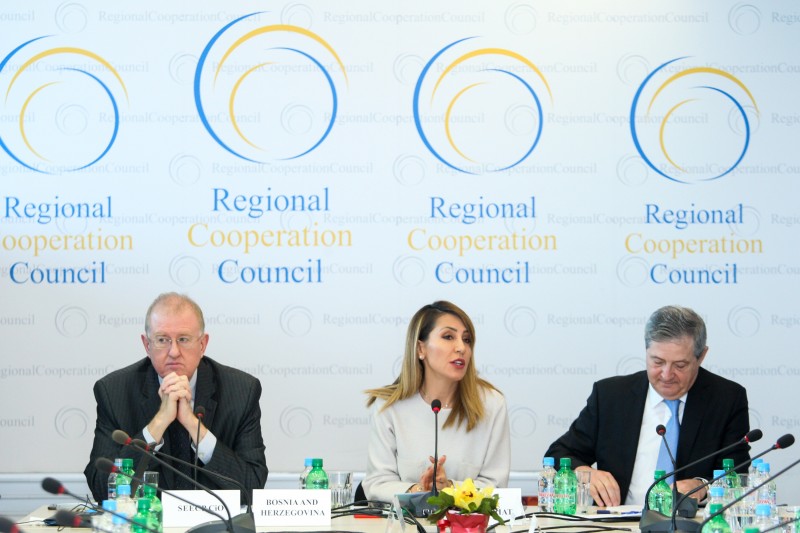 SARAJEVO – The Regional Cooperation Council (RCC) presented its Balkan Barometer 2020, the annual public and business opinion survey of the RCC which examines the perception and expectations on life and work, prevalent socio-economic and political trends & regional and European integration in the Western Balkans. This year, Balkan Barometer 2020 also included COVID-19 Impact Assessment.

Secretary General of the Regional Cooperation Council (RCC) Majlinda Bregu pointed out that the regional cooperation continues to grow in prominence with an overwhelming majority of citizens supportive of its role in improving the political, economic and security situation in their home economies – 77%, and 65% of them believes that what brings WB citizens together is more important than what separates us.

“The quick spread of COVID -19 was a grim reminder for all of us of how the disasters ignore borders and that cooperation is maybe the only blueprint that holds the promise of ‘Stronger Together’,” Bregu pointed out ahead of the Balkan Barometer (BB2020) presentation which took place yesterday.

The special COVID19 Impact Assessment edition of BB2020, the RCC conducted in May 2020, provides a snap-shot analysis of the public and business opinion, which in a nutshell shows that 72% of Western Balkan citizens consider the pandemic outbreak as a high threat for their respective national economies. 68% of people are very much concerned about their own or their family members’ jobs and only one third of them are satisfied with how their Governments ensure that people do not lose their jobs.

“At the same time, the Balkan Barometer reveals that during the pandemic lockdown 65% of Western Balkans citizens confirm their appreciation of foreign assistance, where overwhelming part of it is from the EU. Majority, or 59% of WB citizens support EU membership, while 71% prefer EU as the most important trade partner of our region. Naturally so, as only for the post-pandemic recovery the EU has dedicated 3.3 billion Euro to the region”, RCC stated.

It is added that when asked who they consider to be most corrupt, 83% of Western Balkans citizen pointed to political parties, 80% to judiciary, 79% to customs, 76% to health care workers, and 76% to parliaments.

“Further on, BB2020 shows that brain-drain jumped points as a main concern of our citizens, from 0% in 2015 to 20% now. Staggering 71% of Western Balkans youth think about going to work abroad. This likely shows a strong correlation between lessening concerns over unemployment and rising anxieties over brain-drain as Western Balkans economies start to come to terms with exceptionally high outward migration of skilled labour”, RCC ponted out in a press release.

Another finding is that 60% of the business respondents have reduced operations due to the COVID-19 outbreak, while 21% either temporarily closed or completely closed their businesses. Only 5% have laid off staff permanently. On a positive note: whilst 37% of women are impatient to go back to normal work, 40% of young people were very happy to spend time with their families – most surprising finding.

“The Covid-19 will be a tipping point for the region. Channelling information and perceptions in favour of policy orientations might be the glue that will hold us together. It might persuade everybody that the narrative of domestic competence wouldn’t be wounded if accompanied by real measures of regional competence. That is how we may confidently ‘shape the things to come’,” concluded Bregu.

Várhelyi and Ischinger: The EU needs to see tangible results coming from the region

In his introductory remark, Commissioner for Neighbourhood and Enlargement Olivér Várhelyi pointed out that this survey was very interesting to him personally, because it was taken precisely at the time when he took office at the end of last year.

“It shows me where did we start from and I do hope that next year’s survey will prove that what we have been doing was very well received by the people of the Western Balkans and that it made difference in their opinion“, said Várhelyi adding that 10% increase of people (59%) in the region who think that the EU membership would be a good thing is good news.

He pointed out that, unfortunately, 26% of respondents believe that EU membership will never happen.

“To progress on the EU path we need the governments of the region to continue to deliver tangible results on reforms”, said Commissioner highlighting the fact that the EU reiterated the European perspective of the Western Balkans once again through the help provided during the COVID-19 crisis.

Chairman of the Munich Security Conference Ambassador Prof. Wolfgang Ischinger agreed and added that the countries of the region should not sit back and wait for the EU to come and propose steps.

“Take matters into your own hands, make sure you and your regional neighbours come to Brussels with something to show, with closer regional cooperation. Make it easier for us to integrate you. Come prepared and think of possibility of working together regionally like a potential accelerator of the process”, Ischinger pointed out.

He added that the pandemic crisis has a tendency of accelerating negative trends which we are experiencing globally and regionally.

“But the lesson we are now learning from the pandemic crisis is that each of us is only going to be safe once all of us are safe, and that’s what I call the European imperative. The idea of Europe, the idea of close cooperation and regional integration is going to obtain a boost from this global crisis that has been afflicting the entire world”, concluded Chairman of the Munich Security Conference in his introductory remark.

RCC organised a panel discussion on the findings of BB2020 and its COVID-19 edition, and asked panelists to provide their take on overall (dis)satisfaction of businesses and citizens with the general situation in the region and how they were affected by the Corona outbreak.

Minister of Foreign Affairs of North Macedonia Nikola Dimitrov, whose country got the green light to start the accession negotiations with the EU and joined NATO, both in March, said that people of the region would like to see their countries become European.

“At the same time, the end of that process seems a bit far, both for the people and politicians. We will do everything that we can at home and we need strong European government to work out all challenges to organise the first Intergovernmental conference”, Dimitrov pointed out ahead of the elections in North Macedonia which will take place in July.

Directorate-General for Neighbourhood and Enlargement Negotiations Genoveva Ruiz Calavera highlighted that the COVID-19 crisis has put very clear at the forefront the fact that level of economic integration between the EU and the region is so high that whatever happens in the EU affects the region and vice versa.

Acting Minister for Europe and Foreign Affairs of Albania Gent Cakaj, said that at times there is not very positive perception on how we are doing with regional cooperation.

“There is often a mismatch between public perception when it comes to regional cooperation and what we do in reality. Because there are some of the processes and achievements that we have made, but public perception is not being transformed accordingly. So what we definitely need is better communication to explain the benefits of regional cooperation”, Cakaj underlined.

Advisor to the President of the Managing Board Western Balkan Chamber Investment Forum Nenad Đurđević says that however, there is a pretty high level of optimism in the Western Balkans among the business community.

“Business communities showed that they continued to grow, despite corruption and many things that hamper the growth. But this is something that shows that there is resilience of the regional businesses to be more efficient than their local governments are”, concluded Đurđević.

Serbia covered up the real number of COVID-19 cases before elections, claims BIRN