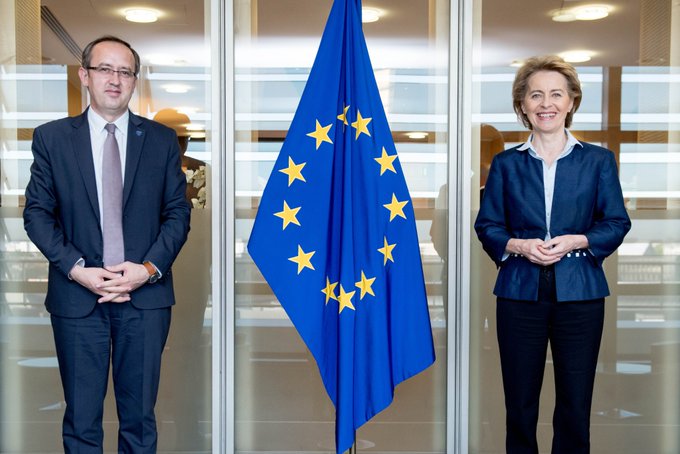 BRUSSELS – Prime Minister of Kosovo Avdullah Hoti met with the Presidents of the European Commission and the European Council, as well as the Commissioner for Neighbourhood and Enlargement in his first visit abroad yesterday.

“Good discussion with Avdullah Hoti. Grateful he chose Brussels for his first trip abroad. We will support Kosovo in the necessary reforms on its path to the EU and in post-pandemic recovery”, tweed President of the Commission von der Leyen.

Meanwhile, Hoti tweeted that Kosovo institutions have marked tangible results in meeting the criteria for visa liberalisation and that the citizens hope that the EU will consider this.

Visa liberalisation was also a main topci in a statement by Prime Minister’s Office following the meeting with the President of the European Council Charles Michel.

“PM Hoti emphasised that visa liberalisation remains among priorities in relations with the European Union. Furthermore, PM Hoti said that to the Government of Kosovo closing of this chapter is very important, in order for Kosovo citizens, like their neighbours, to have a chance of traveling freely into the EU countries,” Gazeta Express reports.

However, according to this paper, the press release issued by the European Council does not mention visa liberalisation at all. The statement stressed, among other things, that the discussion on the EU-facilitated Dialogue between Belgrade and Pristina was at the heart of the meeting.

European Commissioner for Neighbourhood and Enlargement Olivér Várhelyi, on the other hand, confirmed that one of the topics of the meeting indeed was this long-awaited goal of Kosovo.

“We will support EU-related reform process & continue to stand by Kosovo in addressing COVID19 crisis. Visa liberalisation remains a shared goal. Dialogue with Belgrade key”, he tweeted upon the meeting.

Hoti’s visit to Brussels was supposed to be taking place only a few days before the meeting between Presidents Hashim Thaçi and Aleksandar Vučić in the White House, which was cancelled following the indictment of the President of Kosovo by the Specialist Prosecutor’s Office in the Hague. Hoti was, for a short time, announced as Thaçi’s replacement, but the Prime Minister also stated on Thursday that he needs to return to Pristina and deal with the current situation.

Despite a new increase in the number of infected, no harsher measures in the Western Balkans

Up to 200.000 citizens to vote again in Serbian election, opposition accuses government of further manipulation