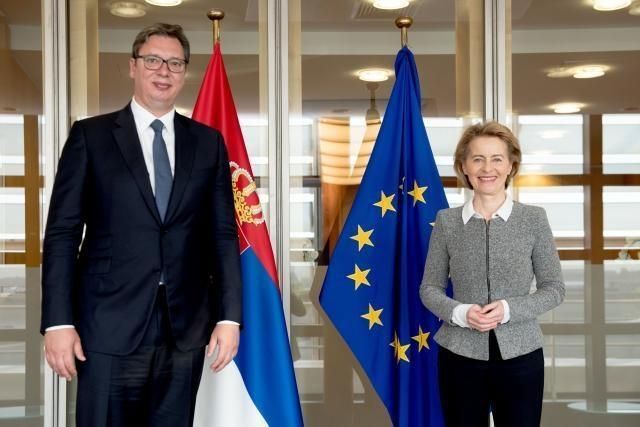 BRUSSELS – The President of Serbia Aleksandar Vučić, met today with the President of the European Commission Ursula von der Leyen in Brussels, and afterwards with the EU Commissioner for Neighbourhood and Enlargement, Olivér Várhelyi, FoNet reports.

As stated by the European Commission, von der Leyen had a “good discussion” with the President of Serbia, in the company of the EU Special Representative for Belgrade-Pristina Dialogue Miroslav Lajčák.

The meeting focused on the recent EU-Western Balkans Summit, at which, as it is recalled, the leaders of the Union confirmed the European perspective of the region, as well as the intention to fight the COVID-19 pandemic together.

“The consequences of the coronavirus pandemic and the help that the EU sent to the region were discussed. The President confirmed that the EC will present an economic and investment package in the spring, which should help the long-term recovery of the region and bring it closer to the Union,” it is stated in a press release after the meeting of von der Leyen with Vučić.

In addition, it is stated that the President of the EC expressed support for the continuation of the dialogue between Belgrade and Pristina, with the mediation of the EU.

Von der Leyen and Várhelyi pointed out after the meeting that “dialogue with Kosovo is key to Serbia’s European path.”

Reforms are key for progress on the European path

It is added that both sides agreed on the importance of reforms for further progress on the European path, especially when it comes to the rule of law and the fight against corruption.

“After the elections, a broader dialogue with all political forces is needed to take a step forward in the reforms needed to bring Serbia closer to the EU,” the EC president wrote on her Twitter account after meeting with Vučić.

Thank you for the good discussion @predsednikrs. After the elections, a broad dialogue with all political forces is needed to move ahead with reforms needed to bring Serbia🇷🇸 closer to the EU. The dialogue with Kosovo is key. We will also support Serbia’s post-pandemic recovery. pic.twitter.com/a1pYcb0b5a

The President of Serbia stated that he believes that at the end of the mandate of the new government – in 2024, accession negotiations will be completed and that it is realistic for Serbia to become a member by 2026. After the meetings, he announced the continuation of the dialogue between Belgrade and Pristina.

“Before that, a summit awaits us, which will be attended by representatives of the largest European countries, which will concern the continuation of the dialogue, but also the further acceleration of Serbia’s EU path,” Vučić said.

Fabrizi: The enlargement process has not stopped

The head of the EU Delegation to Serbia, Sam Fabrizi, assessed today that the visit of the President of Serbia to Brussels, immediately after the elections, is a clear signal that Belgrade is ready for negotiations with Pristina.

He said the election showed that there was a “clear majority for the president in EU-mediated negotiations with Pristina”.

“The enlargement process did not stop and no one gave up, and Vučić’s visit to Brussels is a clear signal for that,” concluded Fabrizi.

Bushati: The Strategy is a step in the right direction