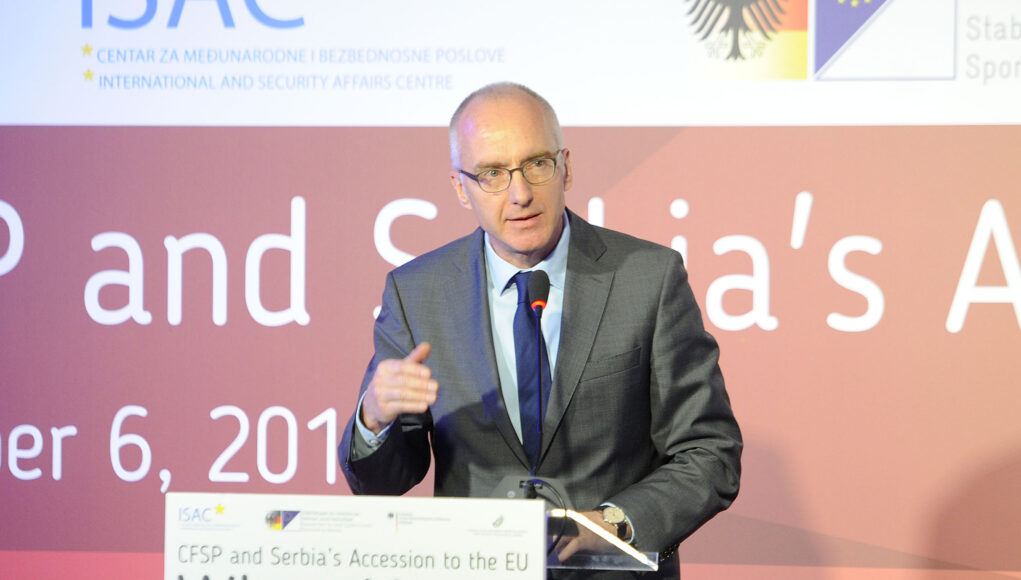 BELGRADE – EU enlargement remains high on our agenda and we hope to make progress in the accession process of North Macedonia and Albania, said German Ambassador to Serbia Thomas Schieb in an interview for European Western Balkans. Schieb added the he is convinced that accession negotiations with Serbia will also progress during German presidency.

Germany’s presidency of the Council of the European Union began on July 1, and the Union is facing extremely important six months when it comes to responding to the health and economic crisis and preserving unity, which are the priorities of the German presidency.

Schieb pointed out that the COVID-19 pandemic changed the priorities of the German presidency.

“As the motto of our presidency says: ‘Make Europe strong again. Together.’ We will do everything we can to help overcome the health crisis and advocate for the economic recovery of our continent. We must respond to the economic and social consequences of the pandemic. At the same time, climate change and digital transformation remain key themes for Europe’s future. The coronavirus crisis is also an opportunity to invest in sustainability (“green recovery”),” Schieb said.

According to German Ambassador to Serbia, EU enlargement remains high on the agenda.

When it comes to Serbia, he encouraged all relevant actors in Serbia to boldly accept the reforms that Serbia has committed itself to in the accession negotiations, especially when it comes to the rule of law.

The narrative promoted by some actors in Serbia during the pandemic is that the EU is moving towards disintegration and that there is a lack of solidarity both within the Union itself and towards the Western Balkans.

“That narrative is simply wrong. No region in the world has shown as much solidarity as we have shown from the European Union. EU assistance to the Western Balkans for the consequences of COVID-19 amounts to 3.3 billion euros. However, it is true that even before the pandemic, we saw public opinion polls which show that the level of Euroscepticism in Serbia is the highest in the entire region. Obviously, we need to better convey the message about the benefits of EU membership and the fact that the reforms leading to the EU are first and foremost beneficial for Serbia itself”, Schieb said.

Asked whether there are serious misunderstandings between the United States and Germany when it comes to the normalization of relations between Belgrade and Pristina, Shieb pointed out that Brussels has a leading role in mediating political dialogue.

“I am convinced that the governments in Pristina and Belgrade will use the momentum to start resolving controversial topics that are still on the table together with Special Representative Miroslav Lajčak – for the good of the citizens of Serbia and Kosovo. I appreciate the initiative of our American friends to make progress in the field of economics and connectivity. I also appreciate all the efforts to create an atmosphere that will encourage dialogue on normalization in Brussels”, Schieb concluded.