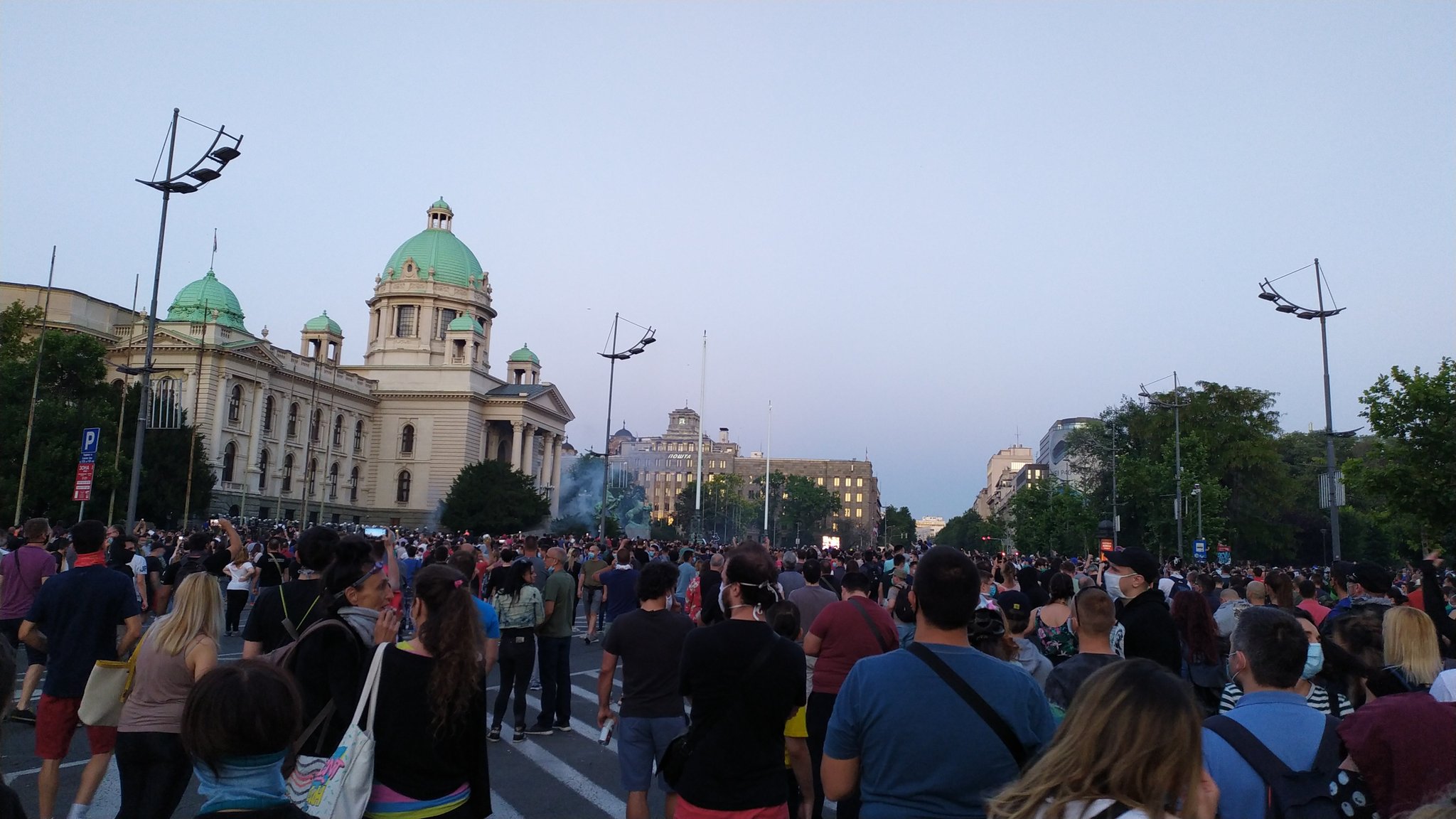 BELGRADE – Violent protests took place in the biggest cities in Serbia on Wednesday. Large gatherings of people originally started out peacefully, but the clashes with police ensued after provocations which the opposition members deny they had organised. Several opposition politicians accused the groups affiliated with the ruling party of infiltrating the protests and escalating tensions with the police. Disproportionate use of force against the protesters was once again recorded.

Following Tuesday’s spontaneous gathering in Belgrade, the opposition parties in the Alliance for Serbia coalition announced their demands on Wednesday afternoon, including the election of the new Government Crisis Staff for the fight against COVID-19, and led their supporters for a protest walk to the National Assembly of Serbia. Additionally, thousands of citizens joined what was originally a peaceful gathering aimed at demonstrating citizens’ dissatisfaction with the way Government has been managing COVID-19 crisis.

However, approximately at 20:15, according to N1 television, several protesters threw pyrotechnics at the police gathered in front of the National Assembly, which sparked a new series of clashes between the citizens and the police. The clashes soon spread across the city centre and included a large amount of tear gas bombs and several new examples of disproportionate use of force.

Our portal reached out to Ljuban Panić, secretary of the Alliance for Serbia and member of the presidency of the Freedom and Justice Party (SSP) led by former Belgrade mayor Dragan Đilas, asking him to clarify who the people that triggered the violent response were.

“We have absolutely no relations to the people that are throwing pyrotechnic and stones at the police officers, which is causing a disproportionate use of force on mostly peaceful protesters”, Panić says for EWB.

He added that his party has no information about the people causing the incidents.

On the other hand, leader of the People’s Party Vuk Jeremić wrote on Twitter that the people raising tensions are hooligans sent by the ruling party.

“He (President Aleksandar Vučić) has sent hooligans to create chaos and cause clashes between the people. He wants us to hate each other… Let us keep peace and dignity, he has no solution for that”, Jeremić tweeted.

Pavle Grbović, Member of the Presidency of the Free Citizens Movement (PSG) claims that Vučić has organised hooligans to infiltrate the protests in order to compromise them and present himself as the preferable option to the EU.

“Vučić is going to Brussels in two days time. The people are justifiably angry. Then several dozen hooligans appear, giving the protests a violent tone, to the detriment of 99,5% of people. In two days time, Vučić will complain in front of Europe about the “fascist hoards” and ask them “do you want these people to come to power instead of me”?

An hour into the protest in the capital, one of the leaders of the “Ne da(vi)mo Beograd” movement Dobrica Veselinović wrote that, in addition to a large number of citizens, the presence of right-wing groups and hooligans at the protests is also evident.

“The affiliation and the background of these groups remain unclear”, Veselinović tweeted.

The presence of a right-wing group of protesters during yesterday’s spontaneous gathering in front of the National Assembly also caused controversy, even though the group was clearly not constituting the majority of the protesters, as confirmed by EWB reporter on the spot, and they were not leading the protest.

How is the ruling party portraying the protests?

Speaking at a press conference at 11 PM, Serbian Minister of the Interior Nebojša Stefanović described in detail the various attacks on police members by the protesters, omitting the examples of the disproportionate use of police force, which once again surfaced on the social media.

Without specifying whether the perpetrators of the incidents were identified as opposition members or not, Stefanović said that “somebody needed the violence”, which is “the key to their politics”.

Prime Minister Ana Brnabić stressed that there will be no “violent overthrow” of the Government, while the Minister of Defence Aleksandar Vulin described the protests as a coup attempt.

Earlier on Wednesday, President Aleksandar Vučić held a press conference on the previous day’s protest, calling it a “brutal political violence” which, according to him, was carried out by the extremist right-wing groups and had nothing to do with the COVID-19 crisis. Without revealing any evidence, Vučić stated that “foreign secret services” had a role in the organisation of the protest.

Unlike on Tuesday night, Radio-Television of Serbia (RTS), the public broadcaster, reported on the protests taking place in Serbia tonight. However, they only gave a token mention to the demand of the Alliance for Serbia that the COVID-19 Crisis Staff should be changed, without going into reasons why. Apart from this, there were no further mentions of the citizens’ dissatisfaction with the way the Government is handling the COVID-19 crisis.

Instead, RTS reported on small groups of protesters carrying religious symbols and singing patriotic songs, which were not representative of the thousands citizens that gathered previously. Most of RTS’s coverage was devoted to the acts of violence committed by the protesters.

New examples of the disproportionate use of police force

A video surfaced on Twitter showing a large number of policemen beating a man lying on the ground and not showing any resistance. The video has been shared widely, with people condemning the act.

The police also attacked the journalists of Nova.rs, even though they showed their press ID, this portal reported.

Among the people attacked by the police were also right-wing Dveri leader Boško Obradović and the international secretary of the Free Citizens Movement Natan Albahari.

Additionally, President of the Free Citizens Movement Sergej Trifunović was hit on the head before the clashes with the police had started. He accused the “associates and the secret services of the regime” of the attack, specifically naming the extreme right-wing movement Levijatan.

Many people also reported the police throwing tear gas bombs across Belgrade, even though there has been no unrest in their parts of the city.

What are the citizens complaints with regards to Government’s response to COVID-19?

The protest on Tuesday was triggered by President Vučić’s announcement that a weekend-long curfew will be enforced due to the worsening epidemiological situation.

This decision was preceded by dramatic changes in Serbia’s policy on COVID-19 pandemic, with the government removing virtually all restrictions and sending messages that virus has weakened in the weeks prior to the 21 June election, followed by the proclamation that the situation is close to a calamity only two weeks later, as well as surfacing of reports by investigative journalists claiming that the true number of cases and deaths has been hidden from the public for weeks, if not months.

The accusations that the ruling SNS created an overly relaxed atmosphere in country during May in June, so that it can score a big victory in the elections boycotted by large parts of the opposition (which it did, winning 60% of the vote, with 49% turnout), have not stopped since the elections.

The opposition and the citizens have continued to point at the huge rises in COVID-19 numbers in the weeks following the elections and the reintroduction of the abandoned measures, culminating with Vučić’s announcement of the new curfew on Tuesday, as the proof that SNS risked the health of citizens by maximally relaxing the measures before the elections and falsely reporting on the seriousness of the situation.