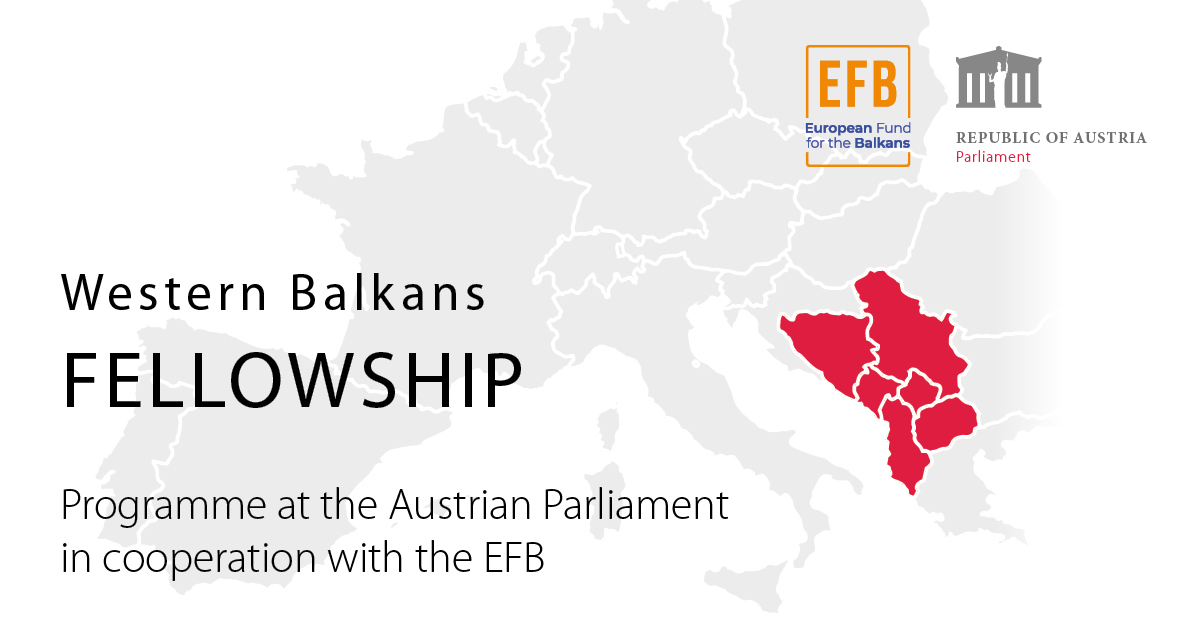 VIENNA – The European Fund for the Balkans (EFB) announced the call for applications for the Western Balkans Fellowship Programme at the Austrian Parliament. The fellowship programme funded by the Austrian Parliament is designed for civil servants working in the administrations of the National Parliaments in Albania, Bosnia and Herzegovina, Kosovo, Montenegro, North Macedonia and Serbia.

The parliamentary staff scholarship program was established in 2019 by the Parliament and the European Fund for the Balkans (EFB) in order to strengthen parliamentary democracy in the Western Balkans. After the successful course of the pilot stage, it was decided that the collaboration should continue. The objective of this initiative is to support Southeast European states on their path towards the European Union.

“Whichever part of the Western Balkans I find myself in, I can sense a strong desire within those countries to someday belong to the European Union. It is our responsibility not to let those hopes down and to accompany our Western Balkan neighbors on their path towards the EU. The Austrian Parliament wants to be a bridge builder and help strengthen parliamentary democracy in our neighborhood. The scholarship program for parliamentary administration staff serves to that purpose, insomuch as it enables direct exchange” – President of the Austrian National Council, Wolfgang Sobotka stated.

The programme enables the parliamentary staff from the WB6 countries to become familiar first hand with the parliamentary work in Austria, during a six-week on-site visit, and to become involved and cooperate in various spheres. It offers a unique opportunity to gain knowledge about the operations and practices of the Austrian Parliament as well as to observe and to learn from the administrative staff and professionals about the different aspects of their work.

The second edition of the scholarship program will be open for applicants until 10 September, and the first group of scholarship holders is expected in Vienna in the spring of 2021.

More info on the call can be found here.

Peaceful protests across Serbia, a small group provokes clashes with police in Belgrade