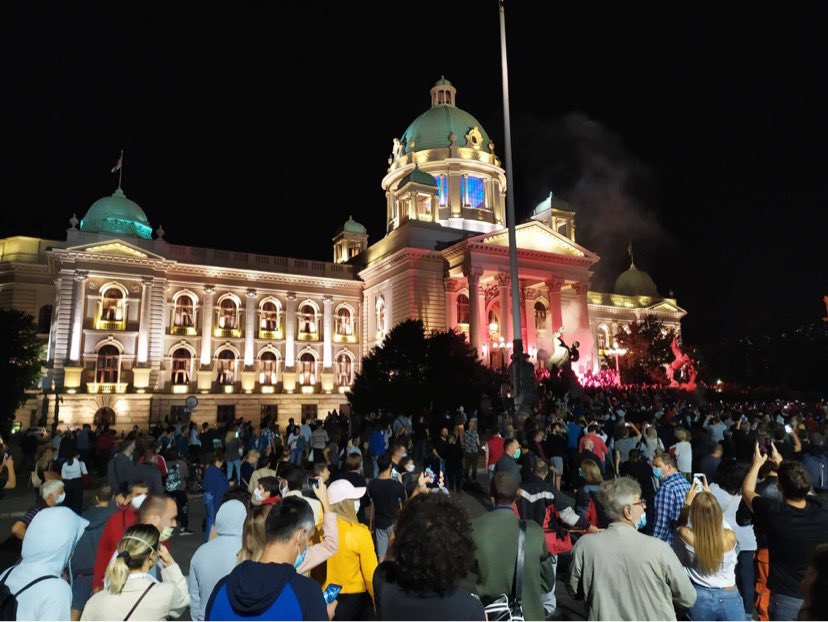 BELGRADE – Reflecting on the protests recently held across Serbia in yesterday’s op-ed for EURACTIV, Prime Minister Ana Brnabić mentioned only the “far-right actors”, continuing to push the interpretation outlined by the President Aleksandar Vučić on the second day of the protests.

Referring to the protests that were taking place during the second week of July, the PM wrote that the far-right actors that had not passed the 3% threshold to enter the National Assembly on June 21 elections, “decided to exhibit commotion once again by fomenting and storming the parliament”.

“I continue to condemn this type of vandalism and violent intrusion, especially at a time when our country faces a major uptick in COVID-19 cases. Oblivious to the realities, these groups have forged chaos for political points, and are now causing a further surge in the number of positive cases and putting the lives of millions at risk”, wrote the Prime Minister as her only comment on the protests, which gathered thousands of citizens in more than a dozen cities across the country.

According to EWB‘s interlocutors, even though the right-wing groups were present at the protests, so were other citizens of different backgrounds.

“We, who were there, know that attempt made by the President and the technical Government to falsely represent all protesters as solely right-wing extremists is calculated to serve the game they play internationally, the game in which they are the centrist politicians, and the unrepresented people are really just a violent mob”, says Biljana Đorđević, a member of the left-wing local movement “Ne da(vi)mo Beograd”.

According to her, people that felt an immediate urge to protest upon hearing yet another President’s speech “disrespectful towards citizens” were very heterogeneous.

“Some were experienced activists, right-wing and left-wing, some were at streets for the very first time, both young and old”, Đorđević says.

She adds that the very fact there were disagreements over how one should express dissatisfaction proves the spontaneity and heterogeneity of the demonstrations.

The first two days of the protests in Belgrade, on 7 and 8 July, saw originally peaceful gatherings turning into violent clashes between the protesters and the police, which also featured several examples of disproportionate use of police force that went viral on the social networks, as well as numerous attacks on journalists. There is still a dispute over whether the clashes were provoked by the people who infiltrated the protests on behalf of the ruling party, as some opposition members claim.

Member of the Presidency of the liberal Free Citizens Movement Pavle Grbović also says for EWB that many people with different political beliefs participated in the protests, but that those with radical beliefs were a minority.

“Most of the demonstrators took to the streets because they do not want to tolerate lies, injustice, the arrogance of the authorities and shifting responsibility for the catastrophic epidemiological situation”, says Grbović.

He adds that it is hypocritical of the Government to interpret the protests as extremist.

“One of the main motives for such manipulation is for Vučić to present himself before European partners as a factor of peace and stability and the only reliable partner, and to present the opposition as a destructive horde that opposes everything civilized. I believe that no one is so naive as to fall for such a hoax”, Grbović stresses.

Leader of the Free Citizens Movement, Sergej Trifunović, was physically assaulted on 8 July. He accused the groups with connections to the ruling party of the incident.

Member of the Alliance for Serbia coalition, which participated at the protests but did not organise them, also claimed for EWB that they have no connections with the people who triggered the violent response of the police on 8 July, which proved to be the most violent day of the protests.

“We have absolutely no relations to the people that are throwing pyrotechnic and stones at the police officers, which is causing a disproportionate use of force on mostly peaceful protesters”, said Ljuban Panić, secretary of the Alliance for Serbia and member of the presidency of the Freedom and Justice Party (SSP) led by former Belgrade mayor Dragan Đilas.

Almost every opposition organisation, as well as several civic initiatives, participated in the protests. Nobody, however, took the responsibility for organizing the further gathering, which led to their relatively quick dispersal. In the final days of the protests, right-wing groups were more prominent, since their members were the most determined to carry on with the gatherings, by then numbering only several dozens of people.

“When there is no official organizer, what gets articulated for the wider public depends very much on the media – whose voices they transmit, whose images they show”, Biljana Đorđević of the “Ne da(vi)mo Beograd” movement emphasises for EWB.

On the second day of the protests, our portal reported that the Radio-Television of Serbia (RTS), the public broadcaster, covered the events live, unlike the previous night. However, it only gave a token mention to the demand of the Alliance for Serbia that the COVID-19 Crisis Staff should be changed, without going into reasons why. Apart from this, there were no further mentions of the citizens’ dissatisfaction with the way the Government is handling the COVID-19 crisis.

Instead, RTS reported on small groups of protesters carrying religious symbols and singing nationalistic songs, which were not representative of the thousands of citizens that gathered previously. Most of RTS’s coverage was devoted to the acts of violence committed by the protesters.

What was the COVID-19 situation in Serbia leading up to the protests?

As EWB reported on the night that the protests began, after imposing some of the strictest measures in Europe during March and April, including several weekend-long curfews, Serbia abruptly revoked most of the measures on 6 May, leading to large gatherings such as sporting events and various celebrations. Member of the Government Crisis Staff Dr Predrag Kon proclaimed the effective end of the epidemic in Serbia on 3 June.

However, immediately on the morning after the parliamentary and local elections that took place on 21 June, Dr Kon announced that the situation with COVID-19 was again serious in Belgrade. The numbers of deaths and infections took off in the week after the elections, reaching record-high levels for Serbia in the first week of July.

In the meantime, reports started to surface that the Government has been covering up the true numbers of cases and deaths from as early as April. On 22 June, Balkan Investigative Reporting Network – BIRN published an article claiming that, according to BIRN’s insight into the official Government database, at least 632 people had died, which was 399 more than the officially announced number of 233 deaths at the time. The potential number of deaths from COVID-19 in this period could be as high as 1000 since not all who died had been properly tested, BIRN editor later stressed. BIRN also claimes in the week leading up to the elections, instead of around 90 new daily cases, the real number was more than 300.

The accusations that the ruling SNS created an overly relaxed atmosphere in the country during May and June so that it can score a big victory in the elections boycotted by large parts of the opposition (which it did, winning 60% of the vote, with the turnout being 49%), have not stopped since the elections.

Kosovo leaders speak out against technical dialogue, stress the need for a political agreement