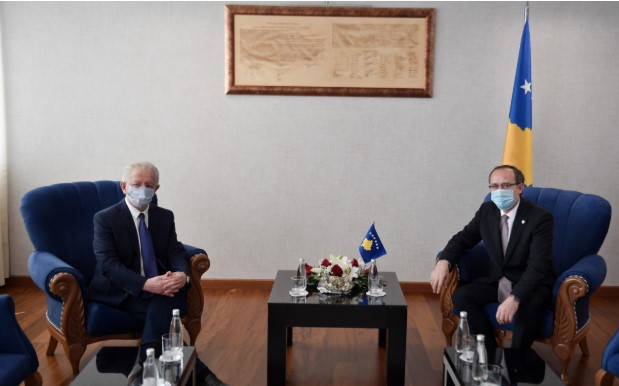 Skender Hyseni and Avdullah Hoti; Photo: Office of the PM of Kosovo

“Based on the Kosovo Government’s Platform on dialogue with Serbia, and in support of the Government’s decision, dated 1 July 2020, and aimed at an institutional and international organisation and coordination of this process, the PM Avdullah Hoti, today has appointed Mr Skender Hyseni as State Coordinator on Dialogue,” the Prime Minister’s Office said in a statement.

According to KoSSev, Skender Hyseni is a member of the LDK, the biggest party of the ruling coalition, and an experienced politician, who was a spokesman for during negotiations with official Belgrade in the early 2000s, from 2008 to 2010 the first Minister of Foreign Affairs of independent Kosovo, and then the Minister of Interior from 2014 until 2017.

Yesterday, Hoti also announced that the Coordinator for Dialogue is going to Brussels to negotiate a final agreement on mutual recognition. There will be technical details in that agreement, but there will be no technical dialogue, Hoti underlined, KoSSev reports.

More than 100 young Europeans discuss the future of Europe at the online conference “Re-boot Europe!”

Lajčak: Negotiations were not straightforward, but we are a step closer to the goal