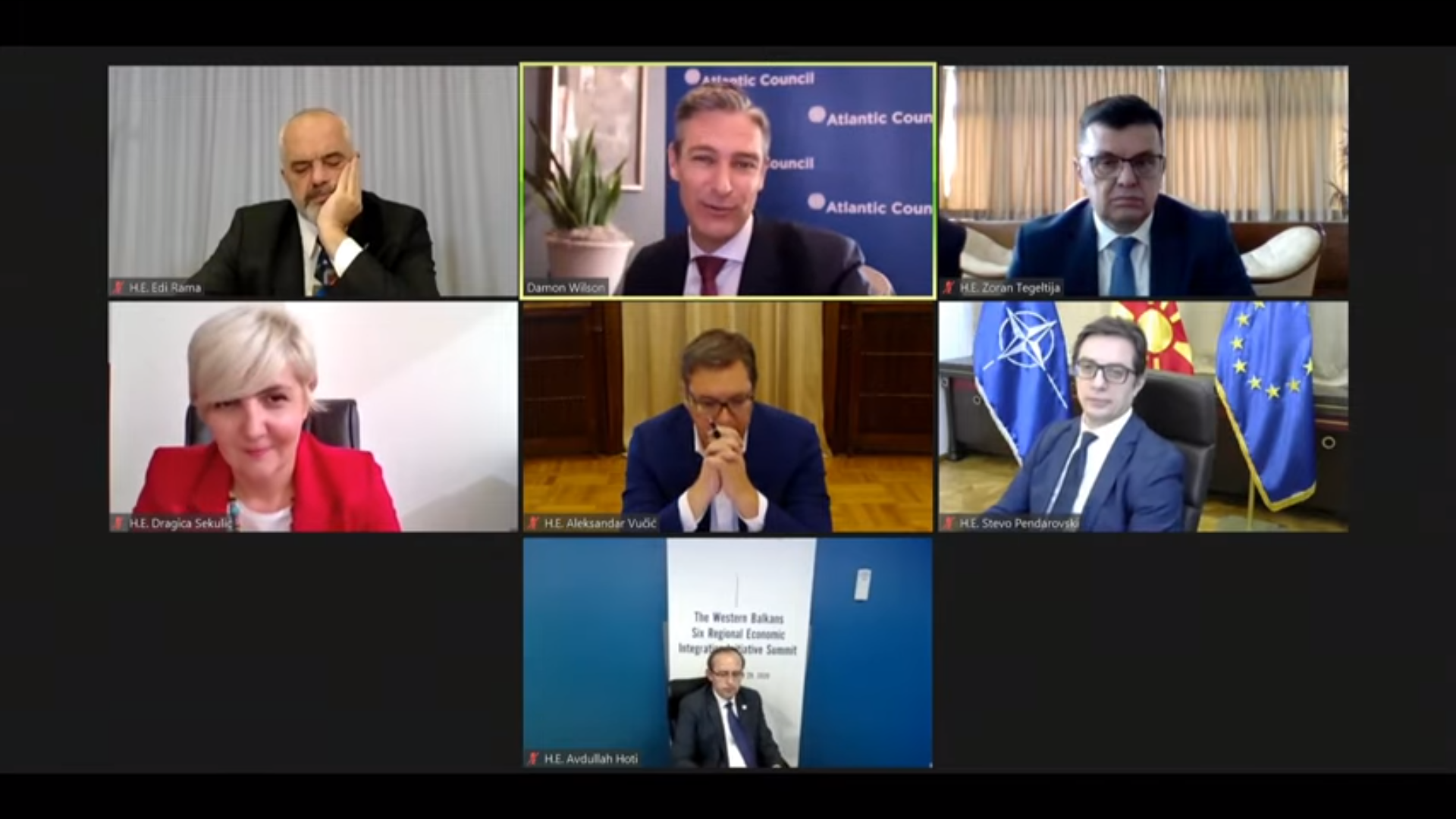 WASHINGTON – Leaders from the Western Balkans Six met to agree on bold, practical actions to help the region emerge stronger together from the impact of COVID-19 with greater regional economic development opportunities at yesterday’s Western Balkans Partnership Summit organized by the Atlantic Council.

They agreed to accelerate free movement of goods, services, capital, and people in the region, eliminating barriers that have hindered economic growth and to pursue an investment plan to attract new foreign direct investment in the region and accelerate the deployment of committed COVID-19 recovery funds, with a focus on infrastructure and energy, it is stated on the Atlantic Council’s website.

The WB6 leaders committed to improving political cooperation and good neighborly relations and to strive to resolve bilateral issues in the region.

“The expected economic and social impacts of the COVID-19 pandemic on the Balkans demand urgent regional action to avoid sustained economic stagnation and the potential instability that comes with it”, the Atlantic Council stated and added that it organized the Summit to facilitate and promote concrete steps among the leaders toward regional economic cooperation that can stimulate post-COVID-19 economic recovery, boost the region’s long-term competitiveness, and strengthen its attractiveness for investors.

Vučić: Regional cooperation is a priority

The President of Serbia, Aleksandar Vučić, pointed out that even if Serbia joins the EU before others, cooperation with other countries in the region will remain a priority.

“We are all too small to achieve anything, but if we work together we can achieve something,” he said.

Vučić reminded that the Western Balkans’ market is the most important market for Serbia after the EU and that everyone should pay more attention to this region and do their best to regain mutual trust.

“We need to stop underestimating our strength, we need to change ourselves,” Vućić said.

He added that he supports the idea of ​​organizing a regional leaders summit once a month, at which all issues would be discussed and the implementation of the agreed would be monitored.

Rama: “Mini-Schengen” is more important now than before

The Prime Minister of Albania, Edi Rama, stated that the “mini-Schengen” initiative is much more important after the pandemic than before.

“It is clear that whoever complicates this process with objections does so only for political reasons and for short-sighted political views. It is complete nonsense that we do not all get involved in this because we are talking about the four freedoms of the European Union,” Rama said at the Summit.

Accordingly, he added that better monitoring of leaders and partners who “must deliver more quickly on what they have promised” is needed.

“Some will have supply chains affected, some production, and some, like us, will be affected by drastic decline in tourism,” Rama said, adding that faster and greater cooperation between countries will help to compensate for the needs.

Hoti: The region is economically divided

The Prime Minister of Kosovo, Avdullah Hoti, stated that the region of the Western Balkans is divided and insufficiently economically integrated.

However, he added that there is a will among the leaders to remove infrastructural and bureaucratic barriers in order for the economies to cooperate.

He pointed out that working together is the only way for “us to complement each other, because our economies are individually small when it comes to markets”.

Pendarovski: The Prespa Agreement is an example of regional cooperation

The President of North Macedonia, Stevo Pendarovski, pointed out the Prespa Agreement between his country and Greece as a good example of the development of regional cooperation.

He pointed out that the agreement not only resolved the disputed issues between the two countries, but also concretized cooperation in numerous areas.

He emphasized that with that agreement, North Macedonia gained free access to the port of Thessaloniki, which, as he says, is important not only for that country, but for the entire region of the Western Balkans.

“Great movement of goods, people and capital has been recorded, and the level of trade exchange between Greece and the European Union has increased through the use of Macedonian territory as transit, which is also very important for us and makes us part of the pan-European market,” Pendarovski concluded.

Sekulić: We should cooperate in such a way as to speed up the path to the EU

The Minister of Economy of Montenegro, Dragica Sekulić, said that the countries of the region should cooperate in order to speed up the path to the European Union.

Sekulić pointed out that it is important to recognize in regional initiatives the chance for further development and reaching the standards for EU membership, as well as for entering the common market.

“The greatest potential for investments are projects in the field of green economy and digital infrastructure,” said Sekulic.

Tegeltija: We have to invest in infrastructure

The Chairman of the Council of Ministers of BiH Zoran Tegeltija, pointed out the problem with the trucks waiting at the borders and said that it is important to invest in infrastructure in order to connect the region.

“We see kilometres-long lines at the border, at border crossings. It looks very demoralizing for all citizens, especially for people working in the transport industry,” Tegeltija said, adding that the situation is not better even when it comes to tourists who come to BiH by car or bus.

Tegeltija stressed that the key priority of the Western Balkan countries should be the creation of a regional economic zone that will enable the development of economic capacities, economic growth and job creation.

Mathew Palmer stated that the relations between the USA and the EU remain “fundamentally cooperative”, that the two sides have a common vision of the future and that they see the Western Balkans as part of the EU.

“The countries in the Western Balkans understand that their economic future lies in regional cooperation and integration into the European family of nations and a successful economy”, said Palmer.

A message that all regional actors see the benefits of cooperations was the most imprtant part of yesterday’s summit, said Genoveva Ruiz-Calavera.

“We can only call on the European Commission to support that, because overcoming obstacles is a goal we set a few years ago, and those obstacles have made the region unattractive to foreign investment,” Ruiz-Calavera said.

When it comes to foreign investments, Majlinda Bregu said that the focus on mutual exchange in the region is what will attract foreign investors.

She added that the Council has prepared an action plan for regional economic cooperation, which will be adopted at the summit in Sofia in November, and which, in addition to the four freedoms of the European Union, also focuses on regional investments, digital market, integration, innovation and green policies.

Stano: False speculations in Serbian media that the EU will present a draft agreement between Belgrade and Pristina today