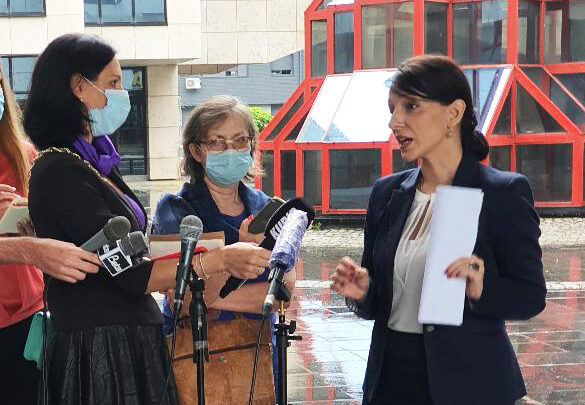 On Monday, Vice President of the opposition Freedom and Justice Party Marinika Tepić unveiled a 38-million-Euros-worth contract between Telekom Srbija and Wireless media, a company of Igor Žeželj, who is also the owner of the pro-SNS tabloid newspaper Kurir, one of the dailies with the highest circulation.

“This proves that SNS administration (of Telekom) is paying for and acquiring media in Serbia with our money”, Tepić said, N1 reports.

According to Tepić, who did not reveal the source who provided the contract to her due to, as she says, security reasons, Žeželj used a part of the 38 million sum to buy the tabloid Kurir. The acquisition took place in January 2019, while the contract was signed in October 2018.

Tepić reminded of the previously shifting allegiances of Kurir, which was at times harshly critical towards SNS and its leader Aleksandar Vučić. Under Žeželj’s ownership, the tabloid has been firmly pro-SNS.

“This document is a proof of a scandalous organised crime of Vučić’s financiers, who influence the media this way in order to laud him and suppress any criticism. And keep us in the media darkness”, Tepić said.

She added that Igor Žeželj had only 2 million Euros on his account before the contract with the state-owned Telekom, which made him a media mogul overnight.

In the meantime, Vice President of the opposition People’s Party Miroslav Aleksić pointed at another controversial tie between Žeželj and Telekom.

According to Aleksić, Žeželj’s production company Firefly, founded in June 2018, became a near monopolist in the production of TV shows in Serbia, thanks to multiple contracts with Telekom.

Aleksić previously filed a criminal charge against several members of Telekom‘s administration for allegedly misusing the public money by acquiring multiple smaller telecommunication operators for what seem to be seriously overcharged prices.

The most infamous acquisition has been that of the cable operator Kopernikus Technology in late 2018. The previous owner of Kopernikus Srđan Milovanović immediately afterwards bought two national television channels, Prva and O2, for an amount similar to what he sold his company to Telekom.

This acquisition, according to multiple interpretations, represented the final stage in the ruling party’s monopolisation of all national television channels. Milovanović’s brother is a high-ranking SNS member, while the TV hosts critical of the ruling party left Prva and O2 in the course of the next year, claiming that the televisions are now unfree.

Commenting on the most recent allegations, technical Prime Minister Ana Brnabić stated that the opposition politicians are “working” for the private SBB telecommunications company, the main rival of Telekom.

SBB is known for including N1 and Nova S, which are the only channels regularly inviting opposition politicians and government critics, in its offer. N1 and Nova S are unavailable to Telekom users.