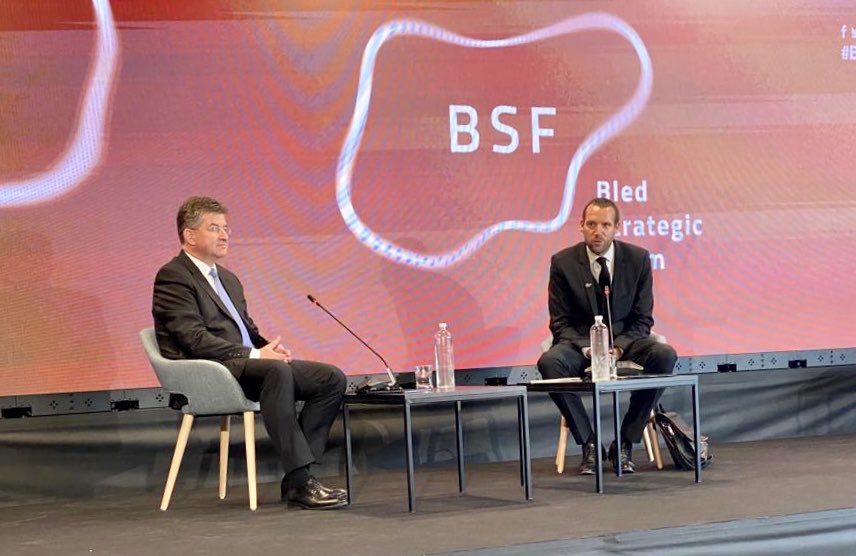 BLED – Normalisation of relations between Belgrade and Pristina is not marketing, the European Union wants to help normalise relations and life for the sake of the European future of Kosovo and Serbia, said Miroslav Lajčak, the EU Special Representative for the Belgrade-Pristina Dialogue and other Western Balkan regional issues at the Bled Strategic Forum.

Lajčak pointed out that the talks, as well as the atmosphere in which they take place, are not easy. He stressed that there is no deadline for the conclusion of the negotiations and that the EU will give the parties as much time as needed to reach a comprehensive agreement on the normalisation of relations, adding that the process will intensify and that the parties will meet more often.

“The expectations of the parties are very different. The atmosphere in which the talks are being held is not easy, but I think that the interlocutors are constructive and are working hard to continue the negotiations”, said Lajčak.

He emphasised that the help of all partners in the normalisation of relations is useful, but that holding parallel talks is not helpful for either Serbia or Kosovo.

According to him, the European Union as a partner has the advantage in the form of the European perspective that it can offer to Serbia and Kosovo.

“The process of normalisation has three sides: Belgrade, Pristina and Brussels. We have an advantage that no one has – a European perspective and membership in the European Union”, said Lajčak.

He added that the European Union must be careful and smart in using what is its advantage, which means that membership should not be given “for free”.

Lajčak pointed out that he has the support for engaging and continuing negotiations throughout the EU.

“On the issue of Kosovo, I have the great support of all member states. I have not heard reservations from any of the member states when it comes to our dialogue,” Lajčak said.

When it comes to Bosnia and Herzegovina, where he served as the High Representative, Lajčak pointed out that the key problem is that the international community is trying to solve small problems, but does not understand or does not see the fundamental problem of BiH.

According to him, the EU and the international community respect Dayton, but at the same time, they are pushing BiH far into another form that is not Dayton.

“Every small step and attempt to solve a smaller problem in Bosnia leads us to the question of whether Bosnia should be based on ethnic or civic representation. Until an answer to that question is found, there can be no great progress for Bosnia and Herzegovina,” Lajčak said.

According to him, the appointment of the EU Special Representative for the Balkans shows that the Union is present in the region.

Lajčak concluded that Brussels made mistakes in its attitude towards the Western Balkans, but that the EU cannot be a global player if it loses its role in its neighbourhood.

After the panel, Lajčak met with President of Serbia Aleksandar Vučić on the sidelines of the BSF ahead of the meeting in Brussels next week.

Hoti: There will be no talk of the Community of Serb municipalities in the upcoming dialogue with Belgrade

“Clear on Europe”, Conference on the Dialogue between Belgrade and Pristina