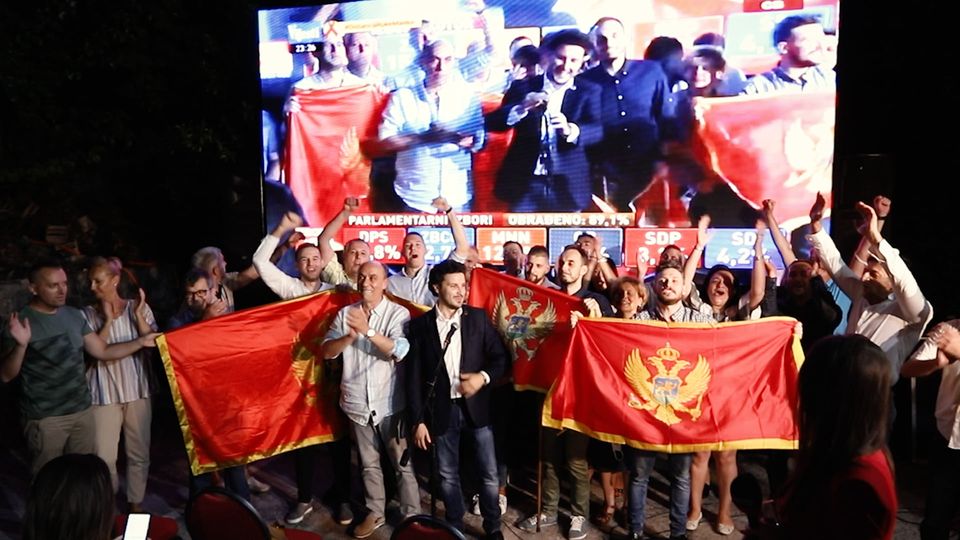 PODGORICA – Following the parliamentary election in Montenegro which saw three opposition coalitions achieve a tight majority of seats, leaders continue to call on their supporters to celebrate the victory peacefully. They also agreed that Montenegro will not be leaving NATO and that the EU reforms will continue.

Immediately after the results of the election showed that the coalition around the Democratic Front (DF) is just a couple of points behind the ruling DPS, the concerns were raised due to the fact that the majority of the members of this coalition opposed Montenegro’s 2017 NATO membership, as well as its independence in 2006.

However, in order to form a government, the Democratic Front will need the support of moderate Democrats and progressive URA movement, both of which are pro-EU and pro-Western. The three coalitions reached an agreement of the principles of the future government on Monday, which include a commitment to international obligations and EU reforms.

“You understand that we as parties were against Montenegro’s NATO membership, but the geopolitical and political reality is such that, by joining NATO via agreements that were signed, there is no possibility of Montenegro leaving NATO, and we shall respect that fact”, said Milan Knežević, one of the leaders of Democratic Front, Vijesti report.

Meanwhile, Dritan Abazović, leader of the URA movement which, with its four MPs, holds the balance of power in the future parliament, unequivocally stressed that NATO membership, as well as Montenegro’s statehood, are non-negotiable.

“We will not back one millimetre away from that principle. Anybody who wants such a country cannot be a partner of our coalition”, Abazović stated yesterday.

The fact that the members of the Democratic Front mostly represent ethnic Serb population in Montenegro and that its leaders have been expressing various degrees of Serb nationalism in the past has also caused concerns. Leader of the coalition in this election, university professor Zdravko Krivokapić, thus made a strong inclusive pitch on the night of the election.

The factor that contributed to the strong result of Krivokapić’s coalition was the backlash to the controversial Law on Freedom of Religion, which the ruling DPS adopted last December. Serbian Orthodox Church, which harshly opposed the law due to its clauses on potential property confiscation, played a noticeable role in the campaign, inviting the citizens to vote against DPS. One of the principles of the new coalition agreed on by the opposition, is for the Law to be revised.

Following the election, citizens started gathering in front of churches to celebrate the victory. Episcopal Council of the Serbian Orthodox Church issued a statement clarifying that it did not organise the gatherings, with leading church figures urging people to celebrate at home, in order to avoid any incidents.

The Church also stated that political change should not be an occasion to spread any kind of intolerance or hate, Vijesti report.

Meanwhile, several incidents took place in the wake of the election – offices of the ruling parties have been demolished in two cities, several people have been hurt in the clashes between the ruling and opposition parties, while several citizens of Bosniak nationality reported threats and an assault, Al Jazeera Balkans reported.

In the capital of Podgorica, opposition supporters reportedly assaulted the supporters of DPS, with police preventing a more serious confrontation.

In the city of Pljevlja, an ethnic Bosniak citizen stated that he was assaulted by opposition supporters, sustaining milder physical injuries. Numerous Bosniaks were also verbally attacked.

“Bosniak citizens of Pljevlja are in fear”, Al Jazeera Balkans reported on Monday, describing the perpetrators as hooligans.

In the wake of the incidents, leaders of all three coalitions reiterated the call for peace following the election.

This year’s election in Serbia was the most controversial in the last 20 years, a new report finds