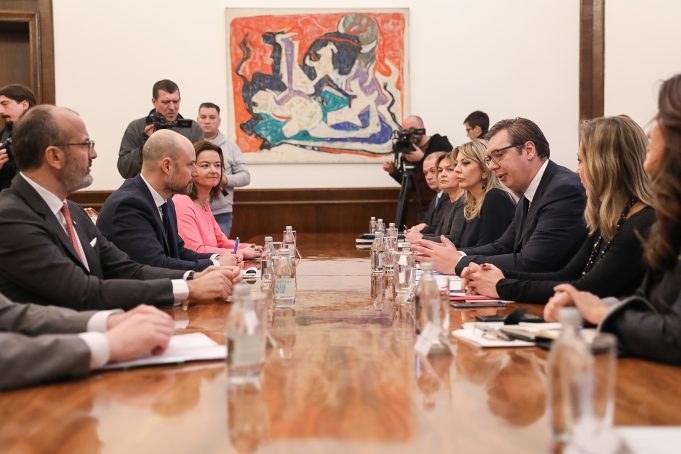 WASHINGTON – The citizens of Šabac will certainly vote for freedom and democracy, always against Tanja Fajon, said Serbian President Aleksandar Vučić speaking about the local election in Šabac, partial rerun of which is scheduled for Saturday, N1 reported.

In a letter to the citizens of Šabac, Fajon (S&D) and a group of other MEPs called for a vote for freedom and democracy and stated that the June elections were subject to many irregularities, which led to by far the largest vote annulment in the last twenty years of elections in Serbia.

In the city of Šabac itself, which is the only city in Serbia currently led by an opposition mayor, the vote will be repeated at 27 out of 100 polling stations.

“We cannot stress enough the importance of free voting without any form of bribery or outside influence. Any attempt to pressure voters to act against their free will should be condemned. It is known that the city of Šabac is a bright and vivid example of democracy, where the rights of citizens are highly respected and where the quality of life is one of the main priorities of the city. We believe that this should be the future of Šabac and the future of Serbia”, the letter reads.

Commenting on the letter from Washington D. C., where he is currently representing Serbia in negotiations with Kosovo, Vučić told reporters that the citizens will always vote against Tanja Fajon, and for those politicians and for those people who are fighting for their country, for an independent Serbia.

Vučić stated that Fajon “disqualified herself” in a letter and “told the people everything that the government has always said”.

This letter was also sharply criticized by the Prime Minister of the outgoing Government, Ana Brnabić, who emphasised that the MEPs are trying to interfere in the internal affairs of Serbia.

“Fajon showed what interference in the election process looks like, not even in a country as a whole, but in one city, Šabac”, said Brnabić.

Brnabić said that it is unbelievable that Fajon, as a mediator in Serbia in the inter-party dialogue last fall, is so committed to one side and that it is unbelievable that someone who is an MEP invites all MEPs to support one side in the local elections in Serbia.
Other members of the ruling SNS also commented in a similar tone on the letter yesterday.

Zelenović: MEPs encourage the people of Šabac to vote

The letter from the MEPs is an encouragement to the citizens of Šabac, and not to any political party, to go to the polls freely, said the current mayor Nebojša Zelenović.

He said it is very important that the representatives of the European Parliament supported what is being done in Šabac, adding that because they persist in protecting European values.

“People of Šapče have had the support of the whole of Europe even before”, Zelenović said.

VoA: Trump to meet with Vučić and Hoti today, an agreement to be signed

Várhelyi: Regional economic integration is an opportunity to move closer to the EU market