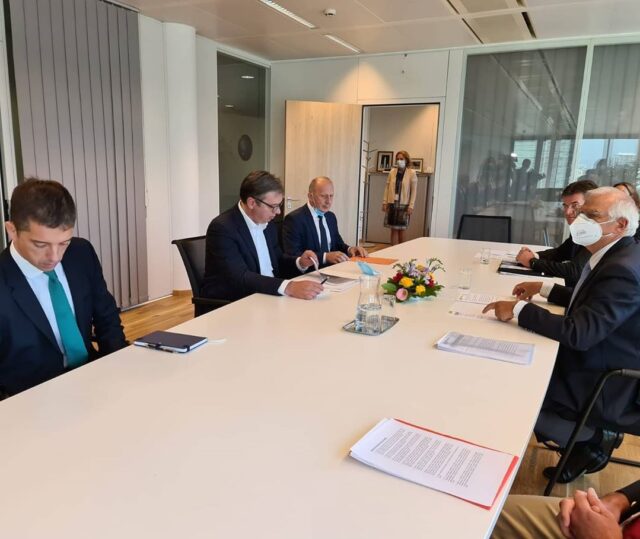 BRUSSELS – Serbian President Aleksandar Vučić and Kosovo Prime Minister Avdullah Hoti confirmed in Brussels to EU High Representative Josep Borrell that their highest priorities are EU integration and the continuation of work on the dialogue on normalization of relations under the auspices of the European Union, FoNet reported.

“On the occasion of the continuation of the EU Facilitated Dialogue between Belgrade and Pristina, President Aleksandar Vučić and Prime Minister Avdullah Hoti confirmed to EU High Representative for Foreign Affairs and Security Policy/Vice-President of the European Commission, Josep Borrell, that they attach the highest priority to EU integration and to continuing the work on the EU-facilitated Belgrade-Pristina Dialogue which is a key element of their respective EU paths”, stated in a Joint Statement by President Vučić and Prime Minister Hoti ahead of their meeting in Brussels.

Vučić and Hoti “also committed to redouble their efforts to ensure further alignment with the EU in line with their commitments”.

“In this respect, the recently agreed documents in Washington, D.C., building on previous Dialogue-related commitments undertaken by the two parties, could provide a useful contribution to reaching a comprehensive, legally binding agreement on normalization of relations”, stated in a Joint Statement.

Vučić and Hoti previously, on Friday in the White House, committed themselves to the normalization of economic relations. In the presence of US President Donald Trump, they each signed a copy of the document called “Economic Normalization”, with the only difference being in the last of 16 points.

The dialogue between Belgrade and Pristina on the normalization of relations under the auspices of the EU will continue today in Brussels with a meeting between Vučić and Hoti.

Before that, Vučić and Hoti met separately with the hosts of the meeting – Borell and the EU Special Representative for the Dialogue between Belgrade and Pristina, Miroslav Lajčák.

Borell pointed out that these talks are not always easy, but that he is happy because he sees the commitment and respect of both sides.

“I welcome that they jointly confirmed that on the eve of today’s meeting. “Their views, of course, differ, but they are coming back here again to find a common language and work on a comprehensive normalization of their relations – dealing with all open issues,” Borell said.

Serbian President Aleksandar Vučić met with EU Enlargement Commissioner Olivér Várhelyi and stated that they had “a very good meeting”.

“Many thanks to the Commissioner for Neighborhood Policy and Enlargement, Oliver Várhelyi, for the significant support that the EU provides through the economic, political and value contribution to Serbia’s progress. Special thanks to the Commissioner for the fact that it is not difficult for him to hear and listen to the representatives of Serbia, no matter how strange it may sound to someone”, Vučić wrote on Instagram.