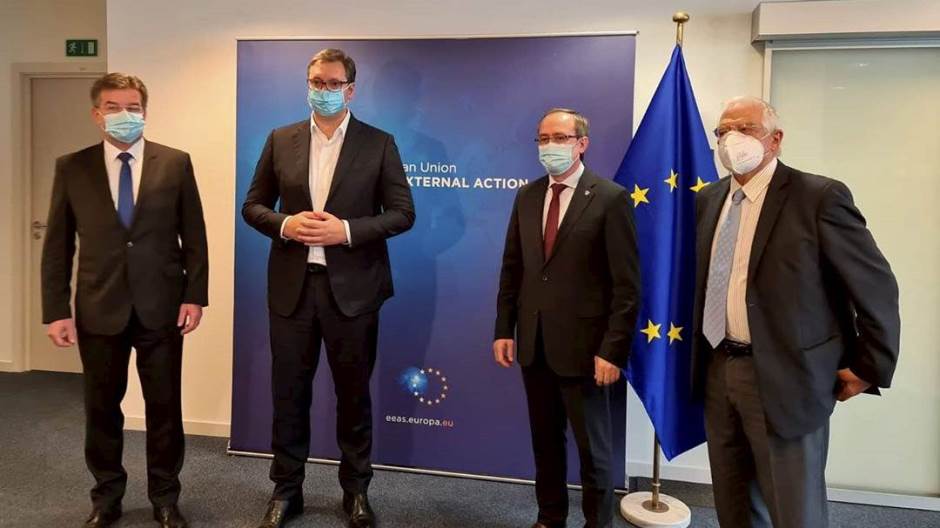 Last week was the most dynamic one when it comes to the Belgrade-Pristina dialogue since its resumption in July, after almost two years of stalemate. In less than four days, representatives of Belgrade and Pristina met with representatives of the United States in Washington, and the European Union in Brussels as part of a new round of dialogue.

However, instead of economic co-operation, the provision concerning the relocation of the Serbian embassy to Jerusalem, which opposes the EU’s foreign policy, and the mutual recognition between Israel and Kosovo attracted the most attention.

However, Executive Director of the Belgrade Fund for Political Excellence (BFPE) Marko Savković reminds that it is still being discussed whether this agreement is actually an international agreement that produces obligations.

Professor at the University of Graz and member of Balkans in Europe Policy Advisory Group (BiEPAG) Florian Bieber believes that neither Serbia or Kosovo have gained a lot in Washington, but that it was much more of a win for Trump and for Israel.

However, he added that the meeting in Washington has worsened relations of Kosovo and Serbia with the EU due to the commitment to move the embassies to Jerusalem, which is against the EU position on the matter.

“Kosovo might be forced to follow through, but Serbia might change its position, depending on who wins the presidential elections in the US in November. Overall, I doubt that there will be much left from the agreement”, concludes Bieber.

After the resumption of the Belgrade-Pristina dialogue, several rounds of talks have been held in Brussels, both on a technical and political level.

Specifically, the fourth meeting of Belgrade and Pristina at the technical, i.e. expert level was held on Sunday, 6 September in Brussels, when both sides brought their positions closer and agreed on a text on the issue of missing and displaced persons and economic cooperation. The meeting was led by the Director of the Serbian Office for Kosovo and Metohija Marko Đurić and Kosovo’s coordinator for dialogue with Serbia Skender Hyseni.

The next day, 7 September, a meeting at the political level was held in Brussels between the President of Serbia Aleksandar Vučić, Kosovo Prime Minister Avdullah Hoti, EU High Representative Josep Borrell and the EU Special Representative for the Belgrade-Pristina Dialogue Miroslav Lajčák.

After the meeting, Vučić said that Belgrade and Pristina “essentially harmonised” the issue of missing and displaced people as well as some economic topics, and opened two new ones – the Association/Community of Serb Municipalities in Kosovo and property and financial topics.

Previously, Vučić and Hoti issued a joint statement confirming that their highest priorities are EU integration and the continuation of the work on the EU-facilitated Belgrade-Pristina dialogue. They also committed to redoubling their efforts to ensure further EU alignment in accordance with their respective obligations.

Borrell welcomed that they confirmed this jointly and added that these talks are not always easy, but that he is happy to see the commitment and the respect by both sides.

“Naturally, their positions differ, but they come back here again to find common ground and to work towards a comprehensive normalisation of their relations – dealing with all outstanding issues”, said Borrell.

What did Belgrade and Pristina gain from the meetings in Brussels?

When it comes to the results of the recent round of Belgrade-Pristina dialogue in Brussels, Bieber underlined that the results of meetings in Brussels are unclear, as we have to rely on the contradictory statements of both parties.

“Here I would wish for greater transparency of the process and the results. It seems like the Brussels process has been more trying to deal with the backlog of unimplemented agreements, which is good, but I have not yet seen much good will, especially on the Serbian side, so I am not sure how much progress we can expect,” said Bieber.

Savković pointed out that in the context of the dialogue, we cannot expect too much, except that the “most difficult” topics were brought to the table in Brussels, judging by the statements given after the meetings.

“But there is a pattern – another indirect confirmation of statehood for Kosovo, in terms of Israel recognition, after years of failure, and economic compensation for Serbia,” Savković highlighted.

The heads of the two experts’ teams, Marko Đurić and Skender Hyseni, will continue negotiations about the Community of Serb Municipalities on 17 September, while the next high-level meeting is scheduled for 28 September in Brussels. But, what do recent events mean for the further process of normalization of relations between Belgrade and Pristina in the upcoming meetings?

Savković said that the positive effect is the additional pressure on the EU to speed up “its part” of the story, that is, the political dialogue in order for the parties to move closer to the comprehensive agreement.

“We saw Palmer this weekend, side by side with Lajčák – so coordination at the level of EU and US foreign affairs services exists. The negative effect could be that if the EU fails in its efforts and Trump wins, I can imagine that the United States will once again take the lead in reaching a political (part of) agreement,” Savković pointed out.

On the other hand, Bieber highlighted that considering the show, the recent meetings in Washington and Brussels do not mean much for the further process of normalization of relations.

“Mostly, the EU process will continue, but I do not have immediate expectations, considering the weakness of the government in Kosovo and the very different expectations of both parties. At best, some open smaller issues could be resolved in the coming months, but a big breakthrough seems unlikely in the near future”, Bieber concluded.

Western Balkans and the EU in 2022: Resolution of problems or escalation of crises?

Reconciliation must be among the London Summit priorities