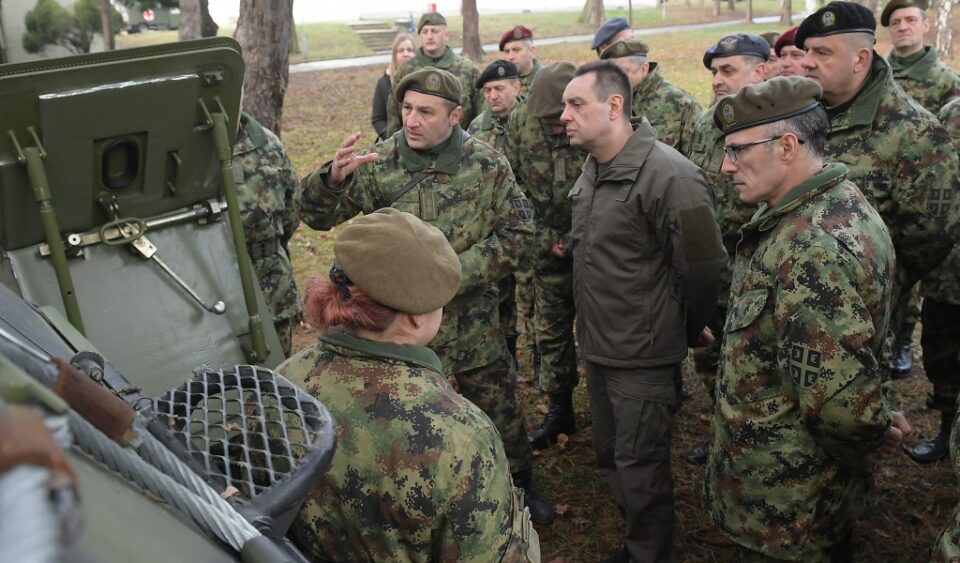 Aleksandar Vulin and the Army of Serbia; Photo: Serbian Ministry of Defense

BELGRADE  – The Minister of Defense of Serbia, Aleksandar Vulin, stated that the Government of Serbia has decided to suspend all military exercises and activities with its partners for six months. While NATO says that they did not plan any special events with Serbia in the coming months, some military analysts interpret this as a collapse of Serbian foreign policy.

Vulin announced this decision yesterday after the session of the Government of Serbia and emphasized that Serbia is a neutral country by the decision of the National Assembly.

“In order to preserve the position of military neutrality, avoid or at least reduce the consequences of intensified attacks on our country, our politics and our economy, the Government of the Republic of Serbia decided at today’s session to suspend all military exercises and activities with all partners in the next six months, without distinction”, Vulin emphasized according to N1.

He stated that Serbia will not participate in the next period “in any exercises or military activities with NATO, the CSTO, Russia, the United States, China, the European Union, the East or the West.” Participation in peacekeeping operations will be specifically considered and, if necessary, suspended.

Vulin also stated that “Serbia is under terrible and undeserved pressure from the European Union.”

“Pressures that make no sense and are not grounded in our decisions or our actions, or even, in reality, are the result of hysteria that determines the political decisions and directions of large and powerful countries,” Vulin said, adding that Serbia was asked “at the cost of abandoning the European future” and “at the cost of even greater pressure” on its politics to abandon the planning of a military exercise with Belarus.

We remind that yesterday Reuters, referring to the Russian news agency RIA Novosti, reported that the Serbian Army, together with the Army of Russia and Belarus, will participate in exercises in Belarus from 10 to 15 September.

Clear distancing of Serbia from Russia?

Military analyst Aleksandar Radić thinks that there is no doubt that the decision of the Government of Serbia represents clear distancing from Russia.

“It was really unthinkable when the foreign policy concept collapse and the attitude towards Russia collapsed, to continue in the same direction and maintain quality military cooperation,” Radić told N1.

He reminded that the cooling of the Russian-Serbian relations came a month ago when Serbia announced that it would buy the Chinese air defence system and not the Russian one. Radić adds that after the signing of the agreement in Washington, there was an explosion of negative emotions.

He said that the unit of the Serbian Army was supposed to go to Belarus for a military exercise with the Russians and Belarusians, on the very border with NATO, in a scenario that is negative for NATO. Therefore, he believes that this decision of the Government is in reality a consequence of military cooperation between Serbia and Russia.

“It is clear that after the Washington event, Serbia is at a distance to the East and that it will be further deepened,” Radic told N1.

In addition, he believes that the proof that there was a collapse of Serbian foreign policy is in the Middle East, where the withdrawal of Serbian members of peacekeeping missions could occur.

“The largest number of Serbian soldiers abroad is currently in Lebanon in places with a Shiite majority, i.e. Hezbollah strongholds. And when you commit yourself to mark Hezbollah as a terrorist organization and transfer the embassy in Israel to Jerusalem, then you really risk counter-actions, because the picture there is unfortunately black and white – you are either with us or you are against us”, warned Radić.

NATO: We did not even plan any particular events

In a written response from an unnamed NATO official to the Voice of America (VOA) it is stated that NATO had not planned any military exercises with Serbia.

“We have not planned any specific events with Serbia in the coming months, but we remain committed to the partnership in the interest of stability and security in the region,” reads the written response.

It is stated that NATO wants to have a long-term partnership with Serbia, which the Alliance appreciates.

“Like all our partnerships, it is based on the needs of the partner state,” reads the Alliance’s response to the VOA.

Since joining NATO’s Partnership for Peace (PfP) programme in 2006, Serbia has had more than 150 exercises with NATO members. Last year, the Serbian Army held 17 military exercises with other countries, 13 of which were with NATO members, while four were with Russia. On the other hand, NATO officials have repeatedly pointed out that they respect Serbia’s decision to choose its security arrangements and with whom it will cooperate.

D’Addario: KFOR is committed to the protection of all the people in Kosovo