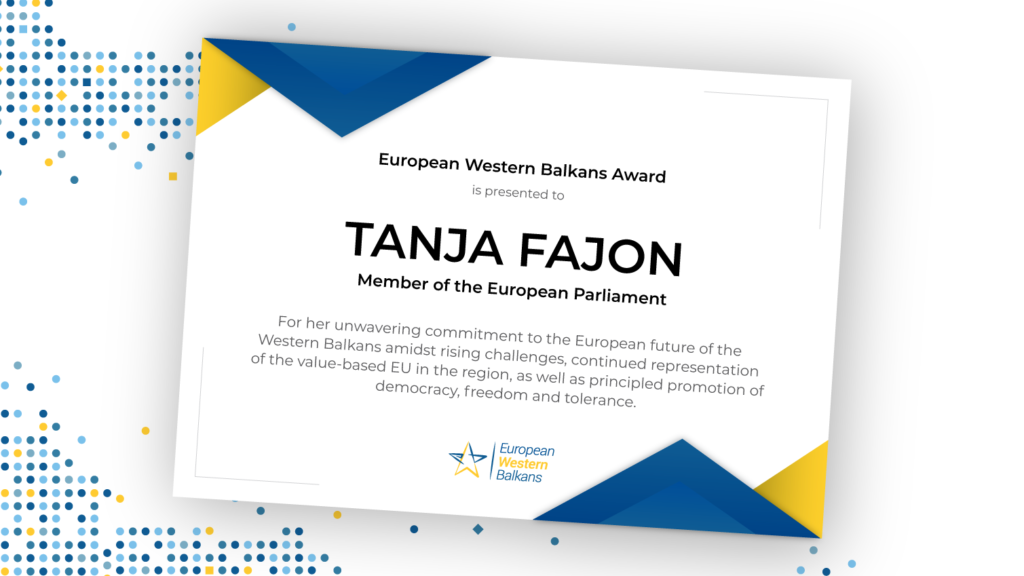 BELGRADE – European Western Balkans has presented its annual Award for the Contribution to the European Integration of the Region to MEP Tanja Fajon.

The Award is presented to Fajon “for her unwavering commitment to the European future of the Western Balkans amidst rising challenges, continued representation of the value-based EU in the region, as well as the principled promotion of democracy, freedom and tolerance”.

Fajon is the second recipient of the Award, which was established in 2019 on the occasion of the fifth anniversary of EWB. The first recipient was Nikola Dimitrov, Minister of Foreign Affairs of North Macedonia at the time.

“It’s a huge honour and responsibility to be able to support citizens of Western Balkan in their aspiration for a better life, better region and stronger Europe for all. The Award is a recognition that my voice is being heard”, Fajon said on the occasion of receiving the Award.

She added that in the Corona crisis – which presents major challenges for all – we have to protect what connects us even better.

“We have to protect our citizens, their fundamental rights, our democracies, rule of law. They are at stake. We have to build a stronger and united Europe. For everyone. Together”, Fajon stressed.

Editor-in-Chief of the European Western Balkans Nemanja Todorović Štiplija reminded that Fajon’s support to the Western Balkans goes all the way back to her early days as MEP, when she advocated strongly for the visa liberalisation of the region.

“In the years to come, she was calling out illiberal tendencies in the WB at the time when almost everybody else in the EU ignored them. No wonder that those responsible for such tendencies now act as if she is the enemy. I believe, however, that her work is now even more appreciated among pro-EU citizens of the region”, Štiplija said.

Štiplija added that her work as the Chair of the EP Delegation to EU-Serbia SAPC and a mediator between the parties in the country is particularly important.

“It is a very challenging situation, which is why it is important to have a person with such an experience with these issues. In Serbia, Tanja Fajon has become one of the most prominent faces from the EU and must navigate through the current political polarisation. No matter the side, her voice has a significant political weight”, he concluded.

Fajon was included on EWB‘s list of 10 MEPs who made the Western Balkans more European during the previous European Parliament (2014-2019). We stressed back then that Fajon had the strongest MEP track record in dealing with enlargement in the EP.

Before entering politics, Fajon worked as a journalist and a Rapporteur from Brussels. She was first elected to the European Parliament in 2009.

In 2019 European Parliament election, Fajon received the most preferential votes in Slovenia. She has been the leader of the Social Democrats, which is currently the biggest opposition party in the polls, since May 2020.