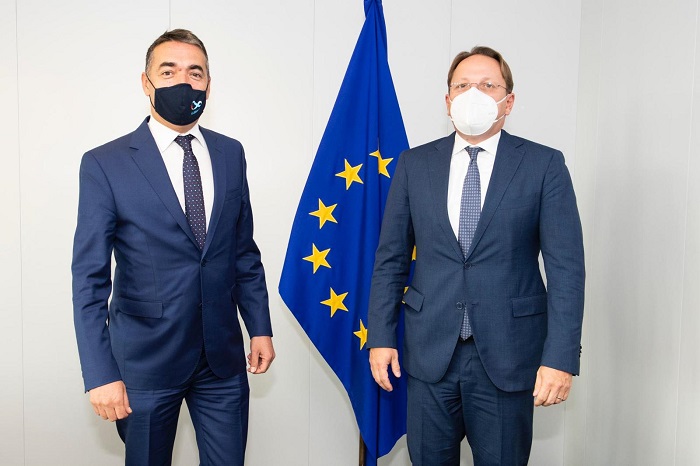 BRUSSELS – Deputy Prime Minister for European Affairs of North Macedonia Nikola Dimitrov met in Brussels with European Commissioner for Enlargement Olivér Várhelyi to discuss for the first Intergovernmental Conference to be organized in late 2020, Mia.mk reported.

“Pleased to have welcomed Deputy Prime Minister Nikola Dimitrov in Brussels today to discuss steps ahead for North Macedonia on EU path in view of green light for accession talks, reforms and preparation of upcoming Economic and Investment Plan for Western Balkans that will boost economic recovery”, wrote Várhelyi on Twitter.

Nikola Dimitrov said that North Macedonia will do everything for its part to seize the historic opportunity.

“We will do everything for our part to seize this historic opportunity, use the accession talks as a tool to bring European standards at home and make the implementation of the upcoming economic plan an absolute priority”, Dimitrov told.

Dimitrov briefed Roth on the priorities of North Macedonia for European integration and stressed that the accession process is the best tool for introducing European standards and principles in the country.

“North Macedonia is determined to become a prosperous European democracy in which the rule of law prevails,” Dimitrov said.

Michael Roth confirmed that North Macedonia remains a priority for the German Presidency.

“The first intergovernmental conference with North Macedonia, the start of accession negotiations, is one of the main priorities of the German EU presidency,” Roth concluded.

Western Balkans: The West meets East with its values and interests

Hahn: Green light for North Macedonia in self-interest of the EU