When the Western World and its multilateral organizations like the European Union and NATO define their foreign policy, there is always the question what dominates, values or interests? Values/principles have been the basis of both, NATO and the EU. The Atlantic Charter and the North Atlantic Treaty refer expressively to founding principles. The EU has a more elaborate catalogue of values, embedded in the Charter of Fundamental Rights, like the rule of law, individual freedom including freedom of expression and of religion, minority rights, sexual rights, etc.

Let’s not forget: background of the foundation of EU and NATO was the horrible World War 2, which was the result of extreme violations of basic human rights and of extreme nationalism. The Western organizations should overcome these disastrous tendencies of the past and build a new Europe.

But nation states and organizations, set up by them, are not neglecting political and/or economic interests. The loser these organizations are constructed, the more national interests will survive under the surface and will influence its decision making. This concerns specially the foreign and security policy of the EU.

The ongoing debates inside the European Union are demonstrating the difficult process of finding common policies, as they are a result of compromises between different national aspirations. The implementation of the vision of an ever closer union is at least interrupted. Paradoxically, national interests became stronger parallel to the integration process. Nations and leading politicians, safely embedded inside the EU, could allow themselves to go it alone, if they thought it would benefit them.

The dominant nation of the Western World, the United States, had always a special position. It was historically proud of its value oriented creation in fighting against the suppression by the colonial master. On the other side it was – as a strong military power surrounded by the sea – always keen on making its political and economic interests clear.

From the Monroe doctrine to its role in the last two world wars, the United States tried to establish itself as the prime regional and later world power. And it even played the worlds police. With President Trump and its „Make America great again“ values became even more substituted by openly interest motivated policies. That also weakened the effectiveness and attractiveness of NATO.

Looking from a Western perspective countries like Russia and China, but to a certain extent also Turkey, are predominantly interest driven. They reject the extension of the West and their value system and want to establish – in the case of Turkey you could say reestablish – their influence, especially in regions not yet “finally” oriented towards the West.

The Balkans are a clear example of a field of competition between the “West” and the “East”. As the EU is hesitating to include the Western Balkan countries – also because they fear an additional weakening of its value orientation by a premature accession – the “Eastern” powers started to fight for the sympathies of the Balkan countries.

Certainly, there are differences between the “Eastern” countries. Russia is referring to some traditional, orthodox christian values which it puts in opposition to liberal values which are, according to their opinion, destroying family values and are uprooting people from their origin. China is offering basically economic benefits but expects nevertheless support against Western criticism of violation of human rights by China. And President Erdogan, with his neo-ottoman policy, is promoting his orthodox interpretation of Islam and fighting against the followers of his former ally Fetullah Gülen. Political and economic interests prevail, but values and ideologies are used to support these interests.

Divisions inside the West

But also, the West became more divided with the US trying to outdo the EU in “solving” the problems of the Balkans. In fact, the last “peace” initiatives in the region – as those in the Middle East – are more determined by the willingness to support the present Israeli government – and some voter groups in the US – and has only side effects on the situation in the region.

Values in its narrow sense remain guiding principles for the European Union only. But it would be a mistake to take it for granted, that they are always the only or even major factors determining the EU foreign policy.

It was the EU Commission President, van der Leyen, who in her first “state of the Union” speech, recently underlined the necessity to stick to values in foreign policy, especially towards Russia. But values and pragmatic interests are very much interconnected. And it is the dilemma of the EU foreign policy, that values are on the one hand much supported also by its citizens, but on the other hand, they do not want them enhanced and promoted by neglecting their immediate – economic – interests.

An additional dilemma for the EU is the fact, that in several member states the very values on which the EU is based are violated with purpose and intention. That undermines the credibility of the EU and strengthens those in the Western Balkans, who are also not keen to see those values implemented in their countries. Some inside the EU even fear, that criticizing the violation of basic values – for example the freedom of expression and media freedom – would push these countries into the camp of the “Eastern” powers. That makes it difficult for the EU and especially its Commission, as the guardian of European principles and law, to follow a strict value oriented policy.

Again, we have to recognize, that promoting “European” values has to be compromised with the interest to keep these countries on the track towards the EU. It is naive to expect from the EU either a strictly value oriented policy or a policy a la Trump in making pure political or economic deals. For some observers the EU policy seems to be a good example of a “muddling through” policy.

But in comparison to the actual policy of the EU “partner” in the West and even more to the – sometimes seducing and sometimes threatening – policies of the “Eastern” powers, the value basis of the EU foreign policy, especially in the Western Balkans, is clearly visible. Nevertheless, a stronger value orientation of the US and by this a more attractive mix of interests and values in a more united West, would make the Western policies in the Western Balkans more effective and give a clear vision to progressive and democratic forces in this region.

Western Balkans — in business we trust! 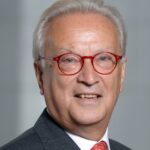 Hannes Swoboda acts as a President of Institute for International Peace (IIP) based in Vienna and President of Center for Democracy and Reconciliation in Southeast Europe (CDRSEE). Swoboda was member of the European Parliament from 1996 to 2014 with focus on South-East Europe, Central Asia, Russia and Middle East and North Africa. From 2012 to 2014 he was President of the S&D Group at European Parliament.