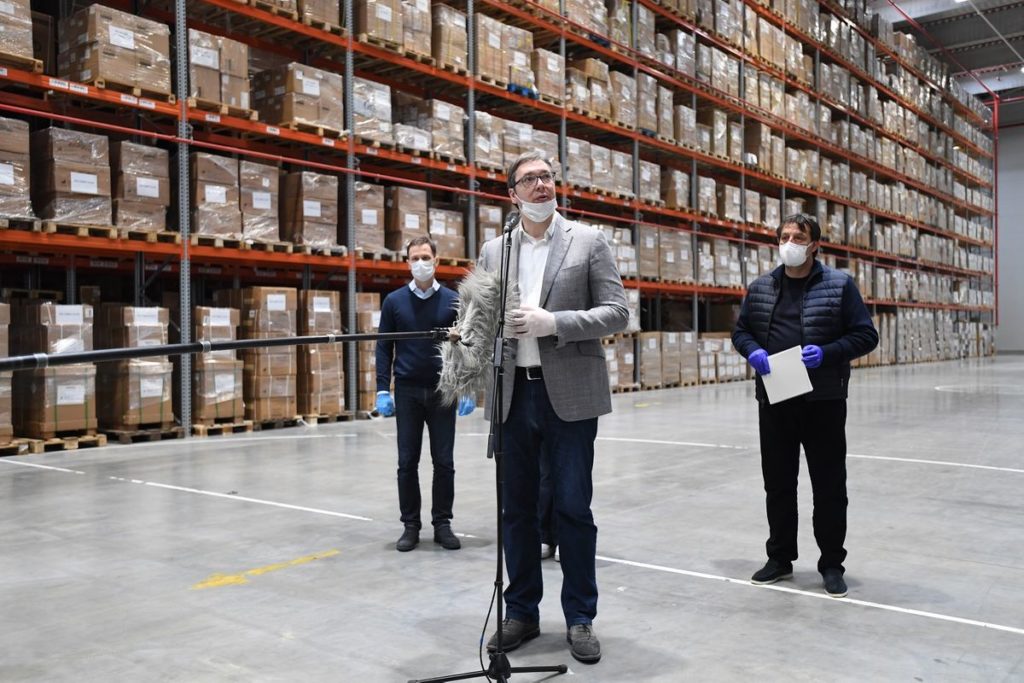 BELGRADE – Since the outbreak of COVID-19 in Serbia, there have been two affairs concerning the high-ranking members of the Government Crisis Staff for the fight against the disease.

Both involved firms connected with family members of the doctors in the Crisis Staff, which were awarded contracts with the state institutions under suspicious circumstances.

The first affair involves Bojan Kisić, husband of the current Minister of Justice, Nela Kuburović, and brother of Dr. Darija Kisić Tepavčević, one of the most prominent members of the Government’s Crisis Staff. Bojan Kisić is the Executive Director of the Czech branch of Nites Group, originally from Bosnia and Herzegovina.

The company’s Belgrade branch, together with the state-owned Telekom, signed a 3,2 million euro contract in April 2020 with the Ministry of Health, for the maintenance of the most important pieces of medical software.

Vreme weekly reported that the documentation of the public call for the contract, which can be found on the website of the Ministry of Health, already had Nites’s data filled in, which raises suspicion of it being rigged.

According to Balkans Investigative Reporting Network (BIRN), which first reported on the business dealings of Bojan Kisić, firms of the Nites Group have signed 27 contracts worth 26,8 million Euros with state and local authorities since 2013.

In addition to state-owned companies, among its partners has also been a firm connected to the brother of Prime Minister Ana Brnabić.

Both Minister Kuburović, wife of Bojan Kisić, and his sister Darija Kisić Tepavčević denied that there has been any conflict of interest.

The official position of Kisić at Nites (Executive Director of the Czech branch) and the lack of direct decision-making of Kuburović on the contracts made by the Ministry of Health and other state-owned companies, makes it hard to arrive at an unambiguous conclusion.

Transparency Serbia, the anti-corruption watchdog organization, assesses as much, stating that Minister Kuburović may have indirectly profited from the lucrative contracts of her husband’s firm, but that she did not have a direct opportunity to make the decisions.

It is worth noting that Kuburović is a member of the Presidency of the ruling Serbian Progressive Party, which has authority over all state and local institutions Bojan Kisić’s firm signed contracts with.

According to portal Nova.rs, Republic Fund for Health Insurance (RFZO) earlier this year, in the context of COVID-19 pandemic, ordered an emergency procurement of medical equipment, which included an almost 2 million euro contract with Šakan’s firm PTD.

What makes this case suspicious is the fact that emergency equipment PTD sold to RFZO did not include COVID-19 equipment at all, Nova.rs found. Dr. Gojković declined to comment on the case.

The public call was controversial in this case as well, with the majority of the required equipment had only one bidder during the process.

During the coronavirus crisis, numerous restrictions and fast-track procedures which aim to provide the efficient answer of the system to the crisis, and suspension of the cheks-and-balances principle, left major space for corruption.

Nemanja Nenadić, Transparency Serbia Programme Director, has said for N1 that the economy and people in general highly depend on the public sector, which is entirely under party’s control that makes it the main generator of the corruption in the country.

“The main generator of corruption is the party’s control over the public sector, which far suppress the importance of political decisions made by the parliament and government. Key decisions in large part of the public sector are signed by easily replaceable acting managers who owe their position to politically powerful people instead of being accountable to the citizens,” Nenadić told.

Transparency Serbia said last month that data on the public procurement of medical equipment was classified by the government to keep it covert.

A press release said that the answer received by Transparency Serbia from the Republic Health Care Fund showed that the data on how public funds were spent in procuring medical equipment was doubly hidden because the government classified it and because the law was not implemented for the procurement.

It said that state officials and pandemic Crisis Staff members disclosed data on the amounts of medication, tests, medical and protective equipment needed to treat COVID-19 patients Serbia bought despite claims that the disclosure would inflict serious damage on the country’s interests.

The new Law on Public Procurement – which came into force on 1 July, 2020, and is in line with EU rules – does not know this exception at all. That means that any emergency medical procurement after that date would have to be announced.

Neither the old nor the new Law on Public Procurement allows the possibility for all data on public procurement to be declared secret, except for certain procurements in the security sector.

“However, that is exactly what seems to have been done with a decision of the government’s General Secretariat of March 11 and the government of 15 March, 2020, but that is impossible to verify because the decisions are not public,” the press release said.

It said that the answer from the Fund, which received 40 billion dinars (1 euro – 118 dinars) from the budget reserve and which probably conducted most of the pandemic procurement, refused access to the requested information, breaking the law on several counts.