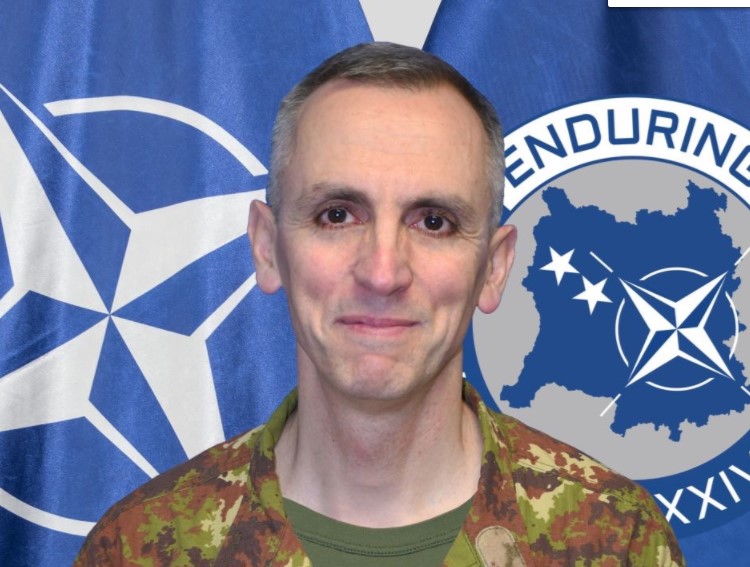 ROME – KFOR is still dealing with a complex security situation in Kosovo, said Major General Michele Risi, current Commander of the KFOR units in Kosovo during the conference “Balkan Perspectives 2020: The Fight for a Timely Inclusion” organised by NATO Defense College Foundation.

Rissi reminded that following the Kumanovo Millatery Technical Agreement that ended 78 days of NATO intervention in FR Yugoslavia, 50.000 strong KFOR force entered Kosovo to monitor the withdrawal of Serbian forces and to stabilise the area.

“First inclusions and threats by the Belgrade forces were avoided and together with the UN Police order and security were preserved. It started demilitarisation of the Kosovo Liberation Army, assistance was provided for the return of the refugees and displaced person from North Macedonia, as well for the demining of 23.000 landmines and 7500 unexploded weapons”, said Risi.

He explained that following the 2008 unilateral proclamation of independence, KFOR stayed because its presence derives from Resolution 1244  and that four NATO members do not recognise Kosovo thus KFOR has maintained of what they refer as neutral status.

“In other words, we do not take positions on Kosovo sovereignty. As a result, our modus operandi, vis-a-vis with the Kosovo institutions and the no recognisers can be challenging, considering that among non-recognisers – Greece, Romania and Slovakia – are troop-contributing nations”, added Risi.

Risi said that over the years international partners UN, OSCE and EU have reduced their presence and competences. Relinquishing many to the institutions in Kosovo. However, KFOR with around 3500 soldiers kept its role intact as the only security force unanimously recognised.

“This can be explained by the fact that now we are complemented by the Kosovo Police and the Kosovo Security Forces in ensuring security and the freedom of movement. Today KFOR has the mission of maintaining the security of Kosovo as a third responder in order to facilitate the normalisation of relations between Serbia and Kosovo” said Risi.

KFOR is still doing its duty

Commander said that KFOR has had to deal with the complex security situation where on one end, there were Albanian communities whose human rights were violated by the Belgrade regime, and on the other, there are Serbs and other minorities who suffered violent retaliation by the Albanian Kosovars.

“KFOR has vowed to protect the Kosovar Serbian communities trying to sway the Albanians from the desire for revenge. Ending the violence, we are sure, that laid the foundation for Kosovo’s future stability”, emphasized Risi.

He pointed out that various security challenges are primarily shortcoming of young Kosovar institutions which certainly need to be strengthened,

“A case in point is the current issue of Dečani in which we witness the persistent municipal opposition to proceed with the cadastral legislation of 24ha adjacent to the monastery in the execution of the sentence of the Constitutional court. Or the atemp of the company appointed by the municipality to rebuild the road surface within the spacial protective zone without the consent of the implementation of the monitoring council which is composed by EU, OSCE and certain Orthodox church authorities, and institutions in Kosovo”, said Risi.

Risi pointed out that this event generated strong protests from the international community and the Quinta ambassadors as well as other organisations, who strongly condemned act that might trigger an escalation in the security situation.

“It is worth noting that apparently nonviolent, local incident has produced resonance that led President Vučić to ask for this topic to be included in the upcoming sessions of the Dialogue”, Rissi explained and added that he practically travelled back and forth to the monastery and with the help of KFOR forces stationed in Peja in the most severe days of the crisis, they avoided an escalation of tensions.

“The guarantee role of KFOR was recognised not only by Bishop Teodosije and Abbot Sava, but by Prime Minister Hoti himself who instructed police to halt construction works on the road within the special protective zone”, concluded Risi.

For him, this event, unfortunately, has warned once more that corruption and illegal approach to common issues has spawned out of the weakness of the young institutions.

“I see this as a factor that risks compromising the credibility of the local institutions, also on the international level in which Serbia exploits in its narrative aimed at discrediting Kosovar establishments”, concluded Risi.

The event was organised in cooperation with the NATO Public Diplomacy Division, the Balkan Trust for Democracy, the European Union and the NATO Defense College