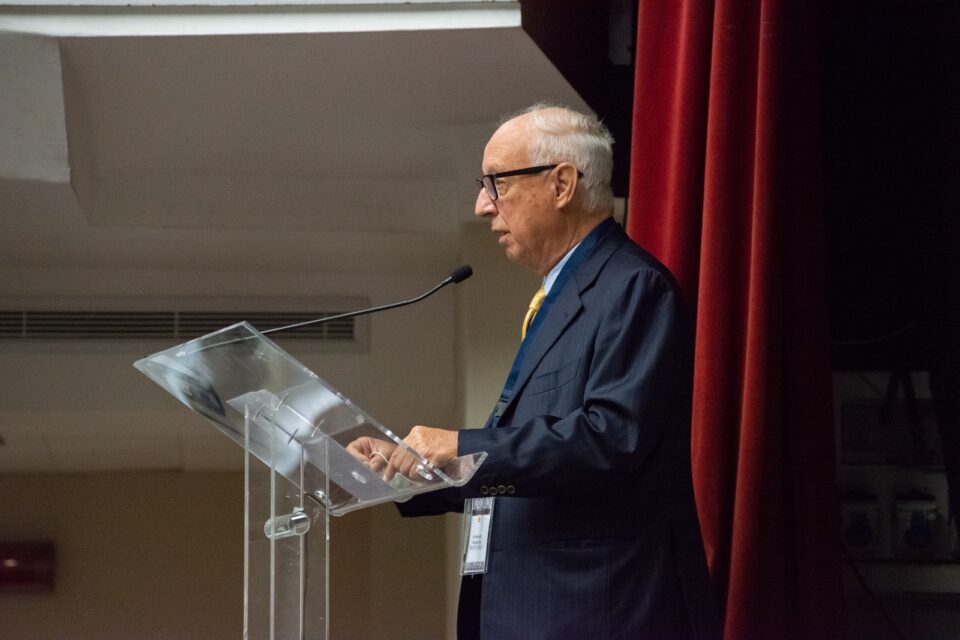 On the occasion of the NDCF High-Level Conference “Balkan Perspectives 2020. The Fight for a Timely Inclusion”, we have interviewed Ambassador Alessandro Minuto-Rizzo, President of the NATO Defense College Foundation (Rome). Ambassador Minuto-Rizzo had a long and successful diplomatic career. Among others, he held the position of NATO Deputy Secretary General between 2001 and 2007, acting NATO Secretary General in December 2003, as well as the position of Head of the External Relations Office of the European Economic Community (EEC) from 1981 to 1986.

European Western Balkans: The year 2020 appears to be the most challenging year in recent memory, and it seems that the world will never be the same. How do you see NATO’s role in the future?

Ambassador Alessandro Minuto-Rizzo: This year is the most challenging in a long time. We don’t know yet the ending of the pandemic under the concerted efforts of the international community. This experience shows the need for more international cooperation and as for now, we see the EU taking credit for that.

I think that NATO will maintain its basic features and will continue to be a primary actor “projecting stability”, in other words with a positive contribution to international security.

EWB: How do you assess NATO’s activities so far in response to the COVID-19 pandemic?

AMR: NATO as such is not at the forefront of the fight against the Virus. It has however activated a mechanism to coordinate practical cooperation and assistance providing relevant material and delivering it to a number of international destinations.

EWB: How do you see recent NATO enlargement in the Western Balkans? Did it have an impact on regional stability and the achievement of NATO’s own strategic goals?

AMR: The “Open Door” policy of the Alliance has shown results over the years in the gradual growth of NATO’s membership. After Croatia, Albania and Montenegro, North Macedonia has joined this year. This country has been a candidate for years and we all know that the reason was the problem of its name. I believe that the accession of a number of countries is a positive added value for the stability of the region.

This year marks an important anniversary of the Dayton agreement and I am convinced that the region has slowly but consistently progressed. We are only halfway but we cannot ignore that the situation has overall improved.

EWB: More than 20 years have passed since the NATO bombing of Serbia. Today, NATO and Serbia are partners and work closely together. However, NATO still has today very low support among the Serb population. In your opinion, what more should NATO do to win Serbian public opinion? Is that necessary at all?

AMR: The historic relationship between NATO and Serbia is not a good one because of the 1999 air campaign.

It is understandable that the public opinion has reservations about the accession to the Alliance. On the other hand, Serbia is the most significant country in the region and therefore has a special value. Maybe NATO is not good enough in giving an image of interest and respect for the country.

In my opinion, it is important to develop personal ties and more practical connections. It would help Serbia to realize that the Atlantic Alliance would serve well the interests of the country and it would also improve its visibility in the international environment.

EWB: What is the prospect of Bosnia and Herzegovina joining the Alliance, given that the Serbian side of the presidency is strongly against?

AMR: I am not aware of an accession process by Bosnia. It seems that this country has a different constitution and a future that is not well defined. Both the European Union and NATO have a strong interest in keeping peace and safeguarding shared institutions in this fragile environment.

EWB: Many Western analysts perceive the influence of China and Russia in the Balkans as something that is malignant. Some NATO officials have said, for example, that Russia supports disintegration processes. How do you see their impact in the region?

AMR: Russia has a limited influence in the region. Vocal appeals apart, the Balkans are not the priority of Russia. The country has not the resources to promote a specific pro-Russian policy. Of course, there are historical links but this not sufficient to alter the present course of events.

China is clearly a powerful country and is promoting its international visibility. It has also the financial means required to pursue this policy. We will probably hear more from that side in the future. For the time being it does not really play a significant role.

Soreca: EU will support social inclusion in Albania with a record 70 million euros

Is the EU enlargement process “going the route of Titanic”?