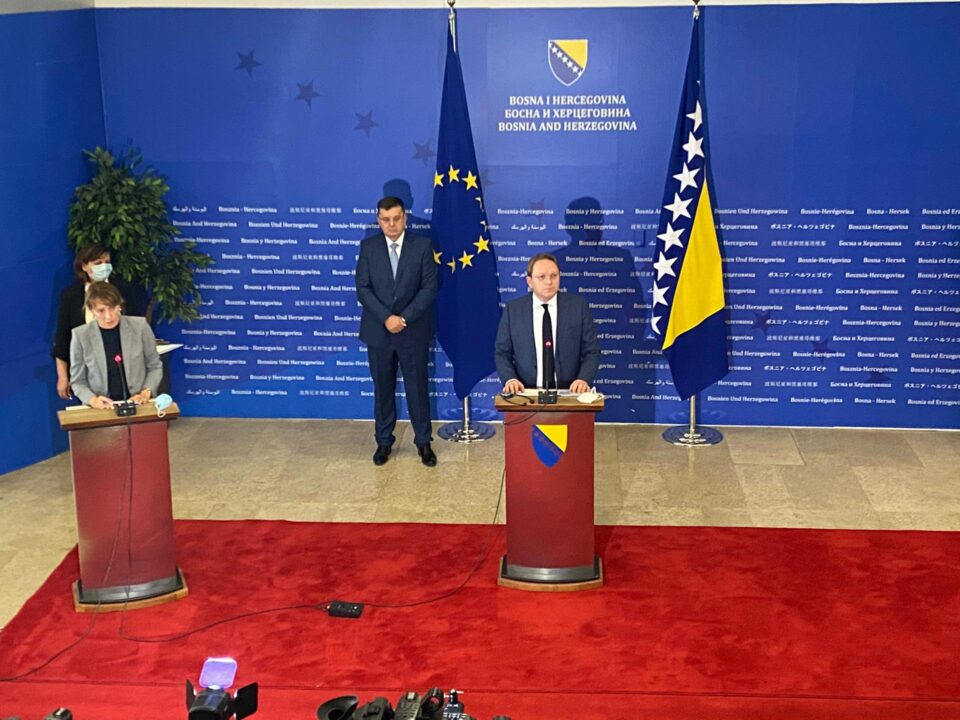 SARAJEVO – The Chairman of the Council of Ministers of Bosnia and Herzegovina, Zoran Tegeltija, met today with the EU Commissioner for Enlargement, Olivér Várhelyi, who during his visit to Sarajevo presented the Economic and Investment Plan for the Western Balkans.

Várhelyi said that the Commission has worked very hard to be clear in its intentions – the Western Balkans are the Commission’s priority through strengthening relations and eventual, long-term, integration into the European Union, reports Klix.ba.

“Because of the consequences of the pandemic, it is important that we work together to recover our economies and accelerate the region’s economies. That is why we are presenting a plan with over 9 billion euros in grants and 20 billion euros in guarantees. The total amount represents one third of the total GDP of the Western Balkan countries. Certain accounts show that this injection could be expected to increase regional GDP by 3.6 percent, and there are those who say that growth will be higher. We see the potential in regional cooperation and the plan is therefore regional – in the design, participation and benefits,” the EU Enlargement Commissioner explained.

He said that the citizens of the region in times of crisis saw that the region could cooperate in the most difficult moments.

“We had Green corridors that allowed the flow of goods without staying at the border, thus enabling help and support to sustain the economy. The plan is based on the concept of a regional economic area or “mini-Schengen”. Its idea is the free flow of capital, people and services, which makes the region more attractive to investors”, said Várhelyi.

Of course, the Commissioner notes, the rule of law is a precondition for the arrival of investments.

“As far as we are concerned, we are ready for further cooperation with BiH and the region and we are ready for a complete change of the environment in 4-5 years. This plan is able to bring tangible results for all citizens of the region in the mentioned period,” Várhelyi said.

Telgetija: The citizens of Bosnia and Herzegovina want a European path

The Chairman of the Council of Ministers of Bosnia and Herzegovina, Zoran Tegeltija said that it is very important for BiH that the Western Balkans is on the European Union’s agenda again.

“The citizens of Bosnia and Herzegovina want a European path. The Council of Ministers is ready to speed up the process of rapprochement and to launch significant efforts along the way”, Tegeltija said.

He added that the period of the European Commission’s report is the period without the formation of the Council of Ministers and the period when proper reforms were not implemented, but the public must know that BiH has resolved the issue of elections in Mostar and that public administration reforms or war crimes treatment have adopted.

He concluded that it was certain that BiH would continue to meet its obligations.

Džaferović: The relationship between the EU institutions and BiH will be continuous