“Ring them bells while they can still can ring “

Should we say that we are happy that we are acknowledged and that we were right? In recent years, most respective and most credible civil society organisations in Serbia have repeatedly stressing alarming level of unlawfulness and irresponsibility of state officials and state institutions, political influence of the ruling party and the executive power over all other branches of government. We were emphasizing lack of media freedom, sky rocketing systematic corruption and increasing political polarization of our society. Now when all this is written in European Commission’s report for this year, I ask myself what is our next move? And what is the next step for the European Union?

I don’t have only doubts what will be course of the action of our government thanks to their reactions to the report. They are criticizing assessment of the report. They criticize the criticism of their performance. Simply put, they are not accepting it. So, they will continue like it is.

Two years in the row, EC report on Serbia relatively objectively has assessed poor rule of law record. This year around, global crisis caused by the COVID -19 pandemic only displayed more bluntly all weaknesses of our rule of law system, all malfunctions of our efforts to create just, free and secure society. Key areas where citizens could feel improvements and better life because of the country’s national interest to join the EU, are lacking any progress. Even worse, there is a regress in the most important areas. Lack of political pluralism, unfair and questionably free elections, judiciary captured by and for the interest of the government, portrays a bleak picture of the 10 years of Serbian journey towards the European Union.

But this picture will not be presented on the national media or on the public service broadcaster. Very few independent media outlets who can report impartially and independently are targeted and intimidated while cases of arrested journalists are increasing. How to report on the rule of law without free press? How to secure that pointing out insufficiencies, abuse of power and other abnormalities serves our national interest and will not result in storming or putting on fire family house of the journalist who reported it?

It is not accidentally, that those CSO who are working on Europeanisation and democratization of the country have found themselves recently on the list of 57 organisations and media, including some prominent individuals, which Administration for the Prevention of Money Laundering, part of the Ministry of Finance is looking into on the basis of financing terrorism. The goal is clear. To intimidate and to harass all those who are thinking differently, to voice down any criticism or dissenting opinions in the society.

So, what is the next move of the Commission and European institutions? Will they tolerate new Turkey on the Balkan Peninsula?

For us, our next move is clear. We will continue to ring them bells while we still have strength to ring and while anyone can hear them.

And we are not happy that we were right. We would be happy to be wrong in seeing all this developing before our eyes.

Lajčák: The Belgrade-Pristina dialogue is clearly connected with the European future of Kosovo and Serbia 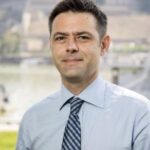 Igor Bandović is the Director of the Belgrade Centre for Security Policy, a position he has occupied since November 2019. Before joining the BCSP, he was a Senior Programme Manager for the European Fund for the Balkans and was is in charge of policy research and advocacy initiatives within the Fund, including coordination of the Balkans in Europe Policy Advisory Group and think tank support programmes.